In the men’s race, Canadians Charles Paquet and Taylor Forbes toed the line with 33 other athletes set to battle for the medal positions across the Olympic distance triathlon – 1.5K swim, 40K bike and 10K run. Mexico’s Crisanto Grajales was the favourite and looking to defend his 2015 Pan Am title from Toronto.

Early on, USA’s William Huffman, Canada’s Charles Paquet, Chile’s Felipe Barraza and Diego Moya were first out on the bike. Later on, a group of 20 men joined the leaders on the bike.

As the riders racked their bikes, the medals were going to be decided on the run. At it took until the last lap for Manoel Messias and Grajales to attack the others and make the race-winning move. In the end, it was Mexico’s Crisanto Grajales who won the sprint finish and held onto the Pan American Games title. “This is my second Pan American win. I trained very hard for this race, and I am very happy for my country,” said Grajales at the finish. “It represents all the work I did over the past years. This also means that I have to keep working to prepare for the Olympic test event in Tokyo and the Grand Final in Lausanne.” 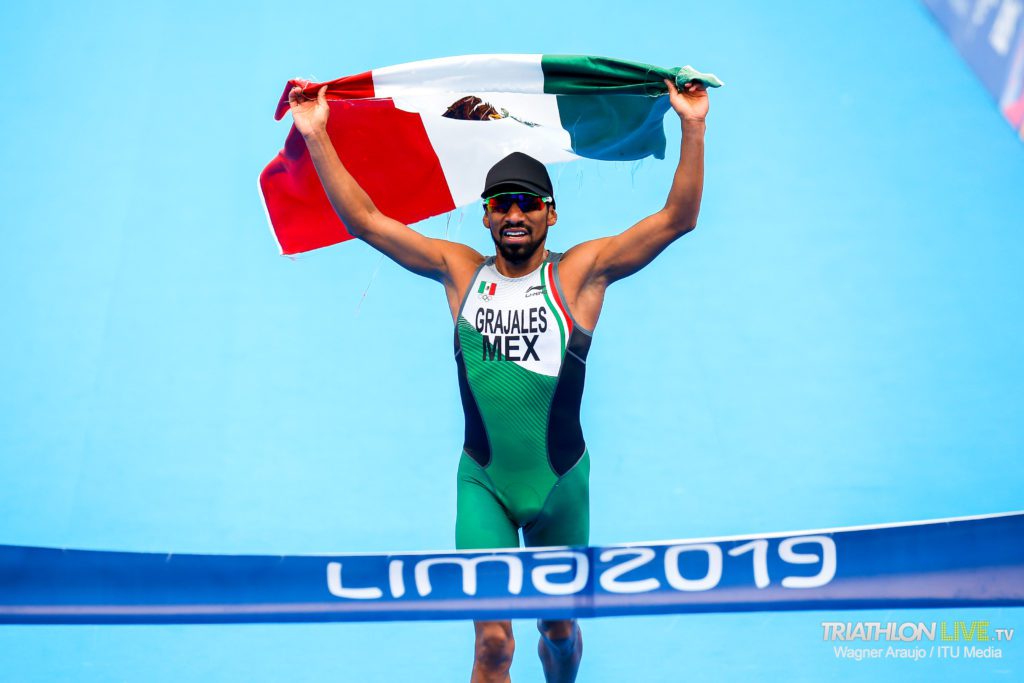 Manoel Messias of Brazil finished an impressive second place and took the silver medal. Luciano Taccone from Argentina separated himself from the others in the chase group and finished third. Canadian Charles Paquet finished sixth, 22 seconds off the podium. Taylor Forbes (CAN) finished 19th.

In the women’s race, Brazil’s Vittoria Lopes led out the field out of the 1.5K swim and continued to open the gap on the bike. Fellow Brazilian Luisa Baptista and USA’s Avery Evenson were the next women out of the water, and joined a chase group of 16 out on the bike course.

During the 40K bike, Lopes had a lead of over a minute, before the chase group began to eat away at her lead. However, the Brazilian triathlete came into T2 with a 50-second lead on her pursuers. In her first Pan American Games, Lopes showed great strength on a very demanding course.

But by the final stages of the run, fellow Brazilian Baptista overtook Lopes to win the 2019 Pan American Games. “It will be very emotional to wear the gold medal. It’s a success not only for me but for all the people around me. My family is here, and it is very special. I was very confident in my run. I knew I could do it; it was an amazing race. I am very happy for this,” said Baptista at the finish.

Lopes who led for most of the race finished second. “I was fascinated by the competition. I am so happy to represent Brazil with my friend Luisa (Baptista). This is my first Pan Am Games, and I have a long way to go. I worked hard on the bicycle. I knew the competition would be tough. I ran my race. I did my race. I did my job, and I did it myself,” said Lopes.