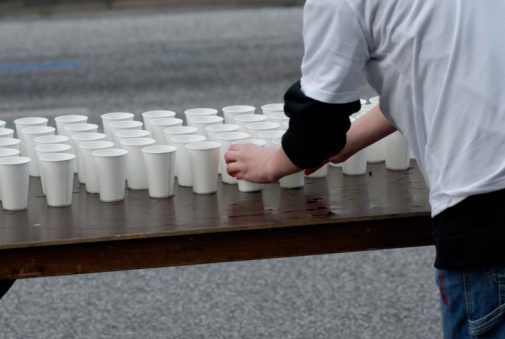 -By Dan Way
How much water do you drink during a run or race? What if we told you it’s probably a lot more than you need?

A new study by Canadian researchers at Brock University has made a surprising finding regarding the effect of dehydration on endurance performance. Namely, that it doesn’t matter that much.

Dr. Stephen Cheung, an endurance athlete himself, led the research and has accumulated over 20 years of experience studying the effects of extreme conditions on exercise performance and physiology.

He sought to challenge the established notion and current guidelines which suggest that athletes should focus on staying hydrated during prolonged exercise bouts in order to avoid adverse effects on health and performance.

To do this, he had trained cyclists ride at a steady, hard pace for 90 minute in 35 degree heat to produce a partially-dehydrated state. Using an innovative IV infusion technique, some were kept hydrated with saline while others became dehydrated. Because our perception of thirst changes depending if we drink or not, some participants were also allowed to rinse their mouths with water to address the perceived sensation of thirst leaving them either feeling thirsty or not.

The surprise finding to come from this was that there was no significant difference between any of the groups. This means that even those who were dehydrated and felt thirsty were able to perform at the same level as those who were fully hydrated and not thirsty. Heart rate and core temperature readings also did not differ, suggesting that becoming up to three per cent dehydrated is not a critically dangerous scenario.

The research challenges current norms and guidelines which stresses the need to stay hydrated in order to perform and avoid adverse health outcomes. It also challenges elite and recreational athletes alike to become less dependent and less concerned on hydrating during a competition and to instead focus on their performance given that dehydration may not affect their health or performance.

The study used a small sample size of only 11 cyclists and the findings are contradictory to conventional thinking. The results should be taken with a grain of salt, though could serve as a base for further research into better understanding hydration during endurance sports.