“I’m really looking forward to coming back to Geelong to race. It is a great place to race, the waterfront venue is awesome and I have good memories there, winning two 70.3′s and a couple of medals at Aussie titles,” he said.

Many athletes will be using the race as a stepping stone for the Ironman Asia-Pacific Championship Melbourne on March 23.  Moffat and Atkinson are part of the popular new trend seeing athletes move from Olympic to longer distance racing. Atkinson, who made the transition from short course to 70.3 last season will again step up in distance taking on Ironman Melbourne in a little over a month. 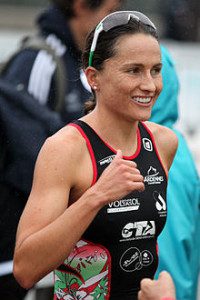 “My goals in 2014 season are focused around trying to master the full Ironman distance race and come October be competitive in Kona. Geelong 70.3 will provide a great early hit out to evaluate just where my body is at with the new focus on the Ironman.”

Moffatt is looking forward to racing in Geelong, and in the future expects to make a permanent move into the longer races, but not before making a run for Olympic gold in Rio. “I did Geelong 70.3 last year (finishing second) as a race to end my base training phase. Initially I said I’d never do another one, but I’m all entered and eager to race!! Last year I mixed drafting races with non-drafting and really enjoyed the change, so after Olympic distance long course is something I’d like to take more seriously,” she said.

“I’ll be doing be quite a few ITU World Series races, Glasgow Commonwealth games, and also hoping to qualify for Ironman 70.3 World Championships and finish the season back in Australia with the Nepean and Noosa triathlons,” she said.