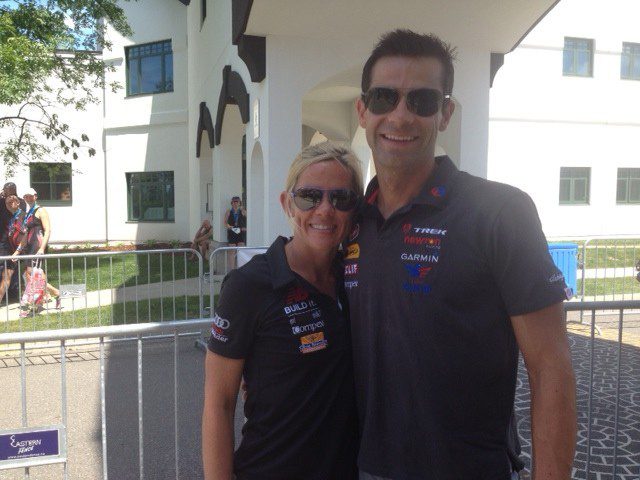 Despite the hurricane-like conditions the day before the race, the Challenge St Andrews took place today without a glitch. Superstar couple Tim O’Donnell and Mirinda Carfrae won in a time of 3:53:03 and 4:18:35 respectively. Second place in the men’s race was Canada’s up-and-comer Cody Beals in a time of 4:05:35 and Nathan Buttrick was third in 4:12: 40. On the women’s side, Charisa Wernick was second in 4:28:54 and third and fourth place went to Canadians Annie Gervais (4:31:01) and Angela Quick (4:49:38).

Except for the odd branches on the side of the road, there were very few signs of yesterday’s storm that caused all of Saturday’s races to be postponed until Sunday. Although the day started off cold, making wet suits mandatory, the temperature quickly rose to 28 degrees by the time athletes were on the run. Athletes completed the one loop swim course, then ran an uphill 400 m to transition. The two-loop bike course featured a series of rolling hills with strong winds at times, followed by a challenging but scenic run.

Upon her win Carfrae said, “It was a world class course and tougher bike course that anticipated and I look forward to coming back!”

Race organizers Tressa and Scott Bevington, who were up all night with their crew preparing for the races, were equally pleased, “We are thrilled with the outcomes of the races, especially given yesterday’s weather.” 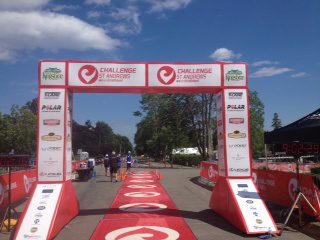