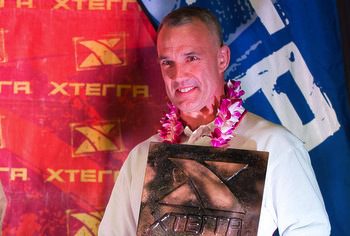 What started out as a bucket-list idea turned into something much bigger for this year’s Mr. XTERRA award winner.

The idea was to do an XTERRA every weekend of the entire season.  We’re talking about 23 races in 24 weeks, the lone break coming over Memorial Day when no XTERRA races were scheduled.  The odyssey was dubbed “XTERRA Across America.”

Now, there have been some pretty cool quests in the past, like when Will Kelsay went on a 12,000-mile XTERRA journey in a beat-up RV.

But every weekend …  all year?!

Nobody had ever done it, heck, the travel logistics alone could tie an intrepid traveler in knots.

Undaunted, the task master – a 48-year-old father of two from Colorado – scoured through the schedule and devised a fail proof plan.  Right!  Ever heard the expression “best laid plans of mice an men?”

Well, his first race of the season was cancelled a week before the event, and the trials and tribulations that ensued – delayed flights, bike fiasco’s, fires and foul weather, crashes, colds, aches and pains, sleep deprivation, and the tireless search for good sushi in strange places … only solidified his mantra.

In between the races, he’d work.  A lot.  Despite traveling more than 40,000 miles and venturing to 15 states from coast-to-coast in a span of six months – he took just four vacation days from work.

And, what was the glue that kept the journey together you might ask?

Let’s start with Paula, his wife and part-time travel partner who’d help him pack, pen his journal, and support him every step of the way.  She was backed up by their two grown boys – Ryan and Danny – and an extended, sprawling, family network that would make the Brady Bunch proud.

Then there were his friends – lots and lots of friends, new and old from Cali to New Hampshire, from grade school classmates to college buddies.  But one stands out.

“His positive outlook and determination to make the most of his time made quite an impression on me” said Mr. XTERRA at the onset of the journey.

So he selected the Blazeman Foundation and the war on ALS as his focus through the odyssey, and helped raise awareness for the disease every step of the way, every chance he got, everywhere he roamed.

The Blazeman Foundation is a family-run non-profit named after the late Jon Blais, whose courageous battle against Lou Gehrig’s disease inspired a generation of triathletes when he became the first person with ALS to finish the Ironman World Championship in 2005.

His racing kit emblazoned with the logo “War on ALS” and the foundation saying “So Others May Live.”

At the finish line of every race, he did the “Blazeman role” – none more special than the role at XTERRA Renegade he did right alongside his good friend Don Young.

He raised thousands of dollars for the cause.  He raised hope for those touched by the disease.

For being the first racer to ever successfully race and finish an XTERRA every weekend of the season, for truly exemplifying the spirit of XTERRA – the challenge, commitment and camaraderie that is the essence of our sport, and more importantly – for being a genuinely great guy we are proud to honor Brent Bieshaar as this year’s Mr. XTERRA award winner.

Brent was recognized at the Night of Champions dinner Friday in Ogden, Utah on the eve of the XTERRA USA Championship, and after he was announced received a rousing standing ovation from the packed house – for a good 10 minutes.

Bieshaar has one more race – the XTERRA World Championship in Maui next month – it’ll be his unprecedented 24th XTERRA of the season.