The 2014 edition of the Boise Ironman 70.3 event marked two weeks in a row where Canadian athletes earned top honors in a large Ironman 70.3 event.  Brent McMahon and Trevor Wurtele took the top two spots outkicking Luke Bell in third in the men’s race. This was McMahon’s second win in as many weeks as he had just won the title at the IM Honu 70.3 event a week prior.  In the women’s race, Melanie McQuaid took the win from wire to wire ahead of defending champion Liz Lyles and third place Sue Huse.  McQuaid also raced the Kona event and had placed 3rd behind Angela Naeth of Canada the weekend prior.  This was the second week in a row that Canada took 3/6 spots on the podium for men’s and women’s Ironman 70.3 events.

The men’s race saw McMahon, Wurtele and Luke Bell coming together midway through the bike to press the pace into T2.  Onto the run, initially McMahon tried to set the pace but lingering fatigue from the bike left his legs a bit tired.  Said McMahon, “A nifty move by Trevor Wurtele at mile four of the run left me no choice but to fall back and settle in for a long hard run. Luke was able to respond to Trevor’s move and the two of them proceeded up the road without me while I tried to regroup.”

However, the race wasn’t over at that point.  Late in the run, Wurtele cracked Bell and had a 15 second gap and McMahon rallied from behind.  Running past Bell, he attempted to surge starting the last mile but couldn’t shake Wurtele.  It wasn’t until the final stretch to the finish, with a series of turns under and over a bridge to reach the finish line that the win was assured. The final stretch as described by McMahon: “There were three sharp turns and a couple short uphills where I knew my little hobbit legs would accelerate quickly.  I pressed hard through this section and as the blood started to pore from my ears and my legs thickened with lactic, I managed to gap Trevor and somehow make it to the finish without falling over, to pick up my second win in as many weeks.  It was a glorious battle with two great athletes and a fellow Canadian and I was happy to have been part of it.”

In the women’s event, McQuaid led Kate Bevilaqua and Lyles out of the water and left T1 in first.  From there she used her bike strength to build a lead of nearly six minutes before the second transition, where she was followed in by Lyles and Bevilaqua.  Lyles, known to be an excellent runner, chased back 25 seconds in the first six miles but only managed to cut the lead to 4:40 by the finish line.  Sue Huse posted the fastest women’s run split of the day to run her way into third place in front of Bevilaqua.

McQuaid explained, “I am not much of a morning person so at 12:00 start is right up my alley.  The tough, hilly and windy bike course was right up my alley and my legs have been improving every week at this point in the season.  I was aiming for a large gap off the bike as I saw Heather Jackson lost a big lead last year to Liz the super runner in 2013.  I felt very strong starting the run but I think running two half marathons in seven days is always tough, so the second lap stung a little.  To lead the race from start to finish is very exciting for me, and has never happened before, so I can thank all of my training buddies in Victoria, BC for pushing me so hard this year to find that kind of fitness.  Congratulations to Liz for defending strongly and to Sue for running her way onto the podium.  I am so excited to share the win with Brent this weekend-so great for Canadian triathlon.”

The race in Boise is run by athletes for athletes, and the result is a top notch race where every detail has been considered.  The police participation both on the bike and the run course was impressive and made for a very safe and well executed event.  It is a very cycling and triathlon friendly town.

After the race many of the pro athletes had a chance to hang out and rehash the day’s events over a few drinks.  The late start meant many athletes went straight from racing to dinner.  It was ironic that two of the sport’s most humble and sportsmanlike men, McMahon and Wurtele, shared the Arrogant Bastard ale.  After the race is over, the pros express nothing but support for each other’s success, which is reflective of the community that is Ironman pro racing.

An interesting side note is both men’s and women’s winners ate macaroni and cheese for dinner, and nearly everyone eating after the race at Whole Foods also chose macaroni and cheese.  The question is whether a study should be conducted to see what the performance enhancing molecules are in macaroni and cheese as that was quite obviously the ‘difference-maker’ in this year’s event. 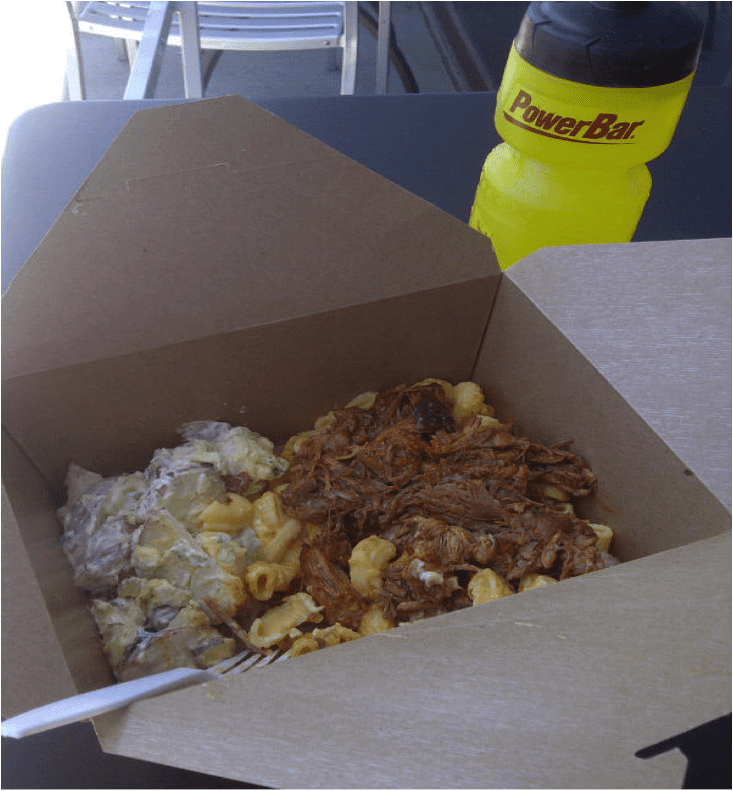