The Ironman world champion in the men’s 35 to 39 age group has been disqualified from both Kona and Ironman Texas for unintentionally breaking the IV infusion rules.

In addition to the disqualifications, Germany’s Chris Dels received a 14-month suspension. All of this is not because he took a banned substance, but the result of getting too much of an IV infusion over a 12-hour period.

According to the release, “Dels received, on two separate occasions, an intravenous infusion of permitted substances at an infusion clinic in a volume greater than 100 mL in a 12-hour period without a Therapeutic Use Exemption (TUE). This occurred while the athlete was in the United States training and preparing to compete at the 2019 Ironman Texas triathlon in April of 2019. The Ironman Anti-Doping Program initiated an investigation after it received a report in October of 2019 linking to the athlete’s own post on his social media account in which explained he had received the intravenous infusions after becoming ill. Dels promptly admitted to his treatment, fully cooperated with the Ironman anti-doping program’s investigation, and accepted the sanction and his responsibility for the unintentional ADRV.”

Dels posted a video explaining the suspension on his Facebook page.

How to lose a world championship title again…

After arriving on 13.4.2019 to prepare for Ironman Texas in the Woodlands, 10 days before the race, a nasty gastroenteritis caught me. After three days of no food and liquid intake, I visited a doctor in the Woodlands who advised me to infusion with a saline solution at the infusion clinic. After consultation with my supervising sports doctor in Germany, I made sure that the infusion, contains the ingredients I need for me, but no illegal substances (doping). This was also confirmed by Ironman’s negative doping controls after Ironman Texas, before and after the race in Hawaii (blood and urine).

But I didn’t know that not only substance, but also the method of infusion itself, regardless of the substances, are prohibited by the rules (Wada Code). An indication of my ignorance, is a video from 18.4.2019 in which I spoke openly about the infusion among other things and was actually meant for my fans in the home. This posted video was sent to Ironman to Hawaii, and I was asked for a statement. This is how I first learned about the following rule.

“2.2 Use or Attempted Use by an Athlete of a Prohibited Substance or a Prohibited Method Intravenous (IV) infusions are included on the WADA List of Prohibited Substances and Methods under section M2. Prohibited Methods; Chemical and Physical Manipulation. An IV infusion or injection is the supply of fluid and/or prescribed medication by drip or push directly into a vein. Intravenous infusions are prohibited both in-competition and out-of-competition if the volume delivered exceeds 100 ml within a 12-hour period.”

Because this is so in the rules, Ironman was left with nothing but to act. With the decision on 8.2.2020, I will be removed from the North American Texas Championship title (M35), the associated qualification and thus the World Championship title of the Ironman Hawaii 2019

Additionally, I receive a competition ban of 14 months, which starts retroactively on April 20., 2019

My mistake was that I hadn’t read the Wada code even though I had confirmed this by clicking on the registration. That way I just didn’t know that I was using an illegal method with the infusion. If I had read the rules, I would have adhered to it 100 % and after consultation with NADA or. The Ironman doctor visited the emergency room of a hospital to get the infusion there… Ignorance doesn’t protect against punishment. As an ambitious triathlete, this shouldn’t have happened to me. Of course, my own negligence annoys me a lot, which wasn’t exactly world champion. This is why I accept the consequences.

But what nobody can take from me and was the most important thing for me from the beginning is the goal of my “Project Podium 2019” to deliver a perfect race at the World Cup in Hawaii. The beautiful experiences on the way there will last forever. 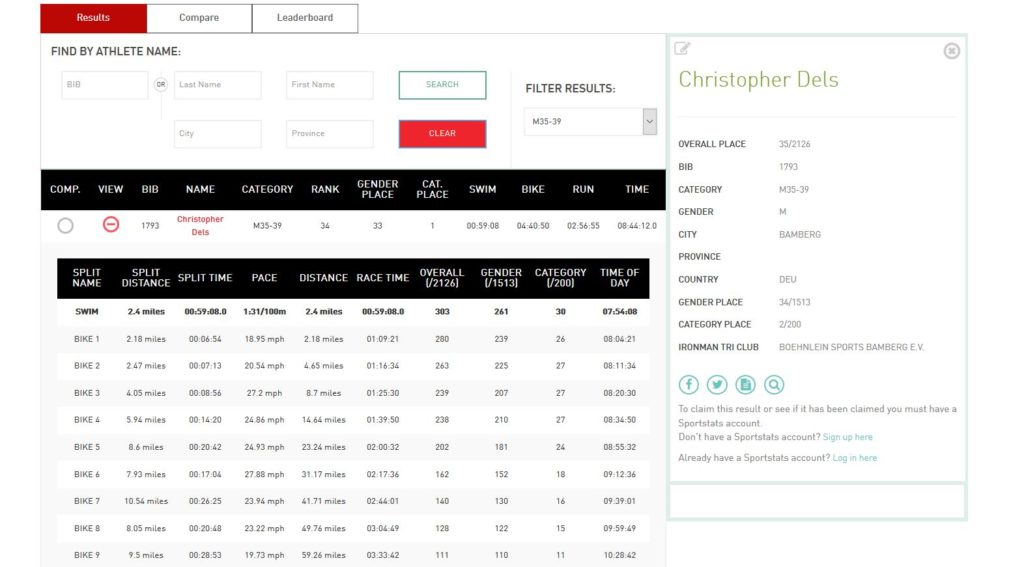 Dels won the age group by just 65 seconds, finishing in 8:44:12. The new world champion in the category will be South Africa’s Donovan Geldenhuys.

“Chris has accepted full responsibility for unintentionally committing an anti-doping rule violation. His case clearly shows how important it is for all athletes to educate themselves and check every substance, and every treatment method before they use it, even if they have used it before,” said Kate Mittelstadt, director of the Ironman Anti-Doping Program.