Robyn Hardage might not see herself as an “uber-athlete,” but after her convincing overall win at Ironman Muskoka in Huntsville, Ont., the rest of the world is starting to see her that way.

Hardage has won smaller races before and had a top finish at Ironman Maryland last year, where she qualified for the Ironman World Championship for the second time, but the experience of leading the way in Muskoka was an exciting one for the 34-year-old from Ottawa.

“The age groupers get to feel like the pros feel,” Hardage said of the experience. “It was amazing to be out there as the lead biker.”

The Muskoka race was Hardage’s seventh Ironman race in the last five years. A former Carlton University hockey player, she got into the sport when encouraged by a friend to do a “Try A Tri” event. That led to some more triathlon and duathlon races, but her multi-sport career got put on hold while she attended law school in Scotland. She focussed on running for a while, but eventually returned to triathlon and did her first Ironman race in Lake Placid in 2011.

In 2013 Hardage competed at the Ironman World Championship in Kona, finishing 11th in her age group. Despite all that experience, she was pleasantly surprised on how well the day went in Huntsville. 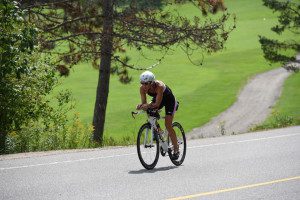 “I felt great on the swim,” she says. “Then I pushed too hard for the first half of the bike and paid for it on the second half. The run off the bike is my strength, I feel, and everything kind of clicked that day. The nutrition went well and everything felt great.”

That great feeling led to an impressive time, too. After a 1:01:18 swim, Hardage finished the incredibly challenging Muskoka bike and run courses in 5:25:40 and 3:20:47. Her overall time of 9:53:37 was over 17 minutes ahead of the next women’s finisher and put her 26th overall across the line.

Needless to say the finish has netted Hardage another trip to Kona for 2016. In the meantime she’s gearing up to head over to Hawaii next month to compete in Kona again, this time with a podium finish in her sites.

The 34-year-old manages to pair a full-time job as a lawyer with the Canada Border Services Agency with a busy training schedule that has led to all the success. She’s enjoyed lots of support from family and friends, many of whom were out on the course in Muskoka to cheer her on. Her mom and stepdad, along with her father and stepmother will all be on hand in Hawaii, too.

When asked the inevitable question about whether or not she has visions of competing in the pro ranks, Hardage is quick to dismiss that option. She’s happy enough to keep on going with her current lifestyle, sacrifices and all.

“I don’t see that (turning pro),” she says. “I work full time and it’s an expensive sport. Trying to race as a pro is risky. It’s become my routine. I do sacrifice a lot and I don’t see my friends a lot, but my good friends really support me – they understand the early bed times.”

The self-coached Hardage seems to have come up with a pretty successful balance of life, work and the rest of life. All of which has her heading to Kona for the next couple of years. 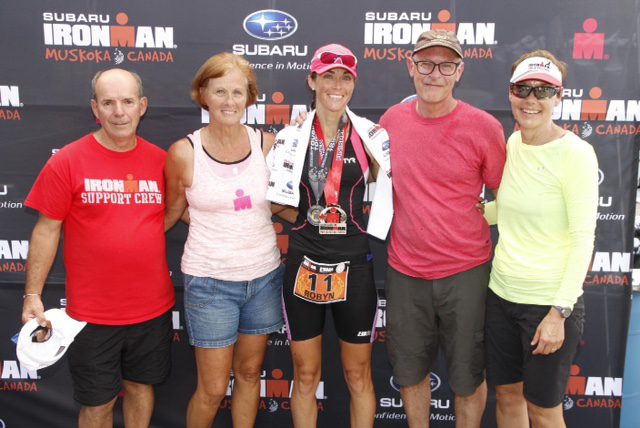