While attending the official press conference to launch Ironman 70.3 Cartagena, we got the chance to check out Cartagena, one of South America’s hidden gems.

Story and photos by Kevin Mackinnon

Combining the charm of ancient Spanish architecture in the spectacular old city with the upscale luxury of the trendy Bocagrande neighbourhood and beautiful beaches, Cartagena now offers triathletes the chance to combine a race with a unique holiday in one of Colombia’s most popular tourist destinations. Ironman 70.3 Cartagena takes place for the first time on December 4, 2016 and offers athletes a chance to check out beautiful Colombia.

I was  invited to check out the official race announcement, along with some of Cartagena’s tourism highlights by ProColombia, “the government entity in charge of promoting international tourism, foreign investment, exports from Colombia and the country brand.” When it comes to tourism, ProColombia spends the majority of its time bringing journalists and travel agents to Colombia and showing them that the country is much safer than many in North America have in their heads. A quick look on the government of Canada travel website (travel.gc.ca) warn against travel to many rural areas in Colombia, for example, but travel to major centres such as Bogota or Cartegena need not be of concern.

The folks at ProColombia are good at their jobs – the trip, while quick, proved to be an enjoyable one and proved their point in Cartagena, anyway. I would have no qualms returning there again or suggesting to anyone they make the trip. I recommend a trip to this beautiful city to anyone who is looking for a change of pace from any of the traditional vacation spots.

Cartagena is about a two and a half hour flight from Miami. There are direct flights from Toronto to Bogota, too. My itinerary included a flight from Toronto to Bogota, followed by a short flight from there to Cartagena.  The flight left Toronto at 8:15 and arrived in Bogota at 2:10. The flight from Bogota left at 4:30 and got us in to Cartagena just after 6 pm. It is a full day of flying to get there, but considering the temperature was still well in the 20s (Celsius) it was nice escape from the cooler temperatures at home at the beginning of December.

ProColombia set me up at the Radisson hotel in Cartagena. The hotel is right on the beach and has a spectacular endless pool, a nice restaurant and is an easy taxi ride to the old city. It only takes a few minutes to get from the airport to the hotel, so by 7:30 pm I was showered and downstairs in the hotel restaurant enjoying some dinner and getting ready for an early night.

I started the morning off with a short run on the beach outside the Radisson. There were lots of people out enjoying the “cooler” part of the day on the beach – even at 6 AM the temperature had to have been in the mid 20s. 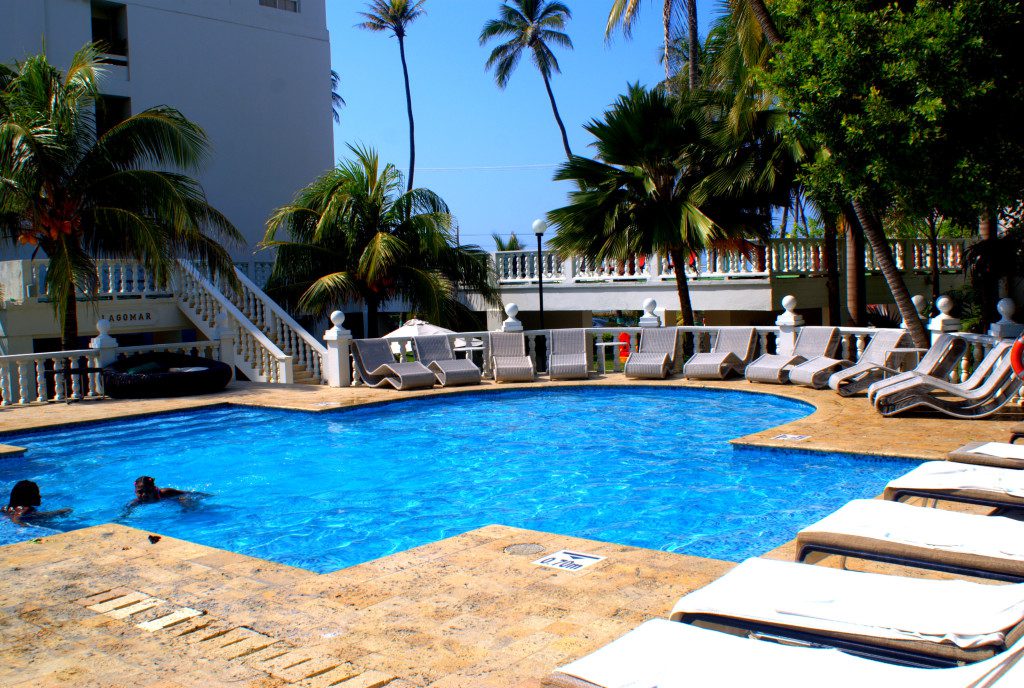 After a quick breakfast I was met by the ProColombia representatives and whisked downtown for the official announcement of the new Ironman 70.3 race. From there myself and another journalist were given the chance to head over to the Hotel Caribe, which is near the posh Bocagrande district, and have a quick swim in the hotel’s beautiful pool. The Caribe is a unique spot – in addition to the classic looking surroundings, lots of wild animals roam around the hotel grounds – during the swim a deer cruised by, and as we left we got to seem some of the beautiful birds that abound around the hotel.

Next on the agenda was a trip into the old city, where we had lunch at Agua de Mar. This unique restaurant was started by “Mar” herself two years ago. A former business journalist from Spain, she decided she wanted a complete change in her life and started up a restaurant that serves Tapas with unique combinations. The meal was outstanding. The restaurant also features a unique gin bar that offers some exotic drinks – again that feature unique combinations of fruits and spices for a one of a kind dinner experience. 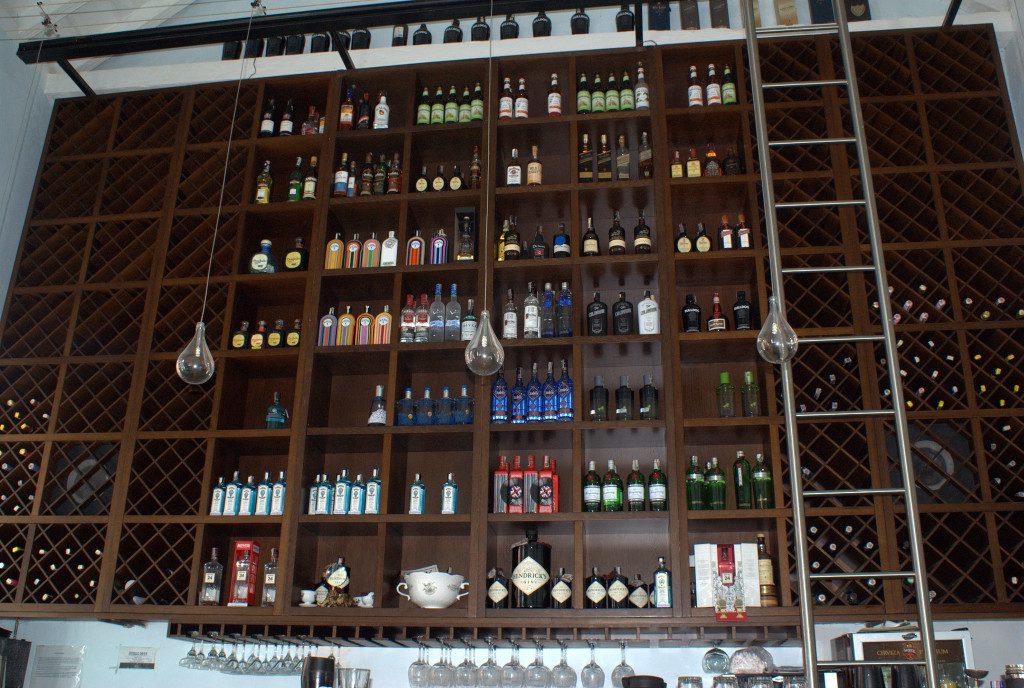 Keeping us moving along, our ProColombia guide then had us off for a tour of the spectacular old city of Cartagena, including some of the forts and also offering a chance to check out parts of the 11 km of wall that was built to protect the old city from pirates during the 17th and 18th centuries. 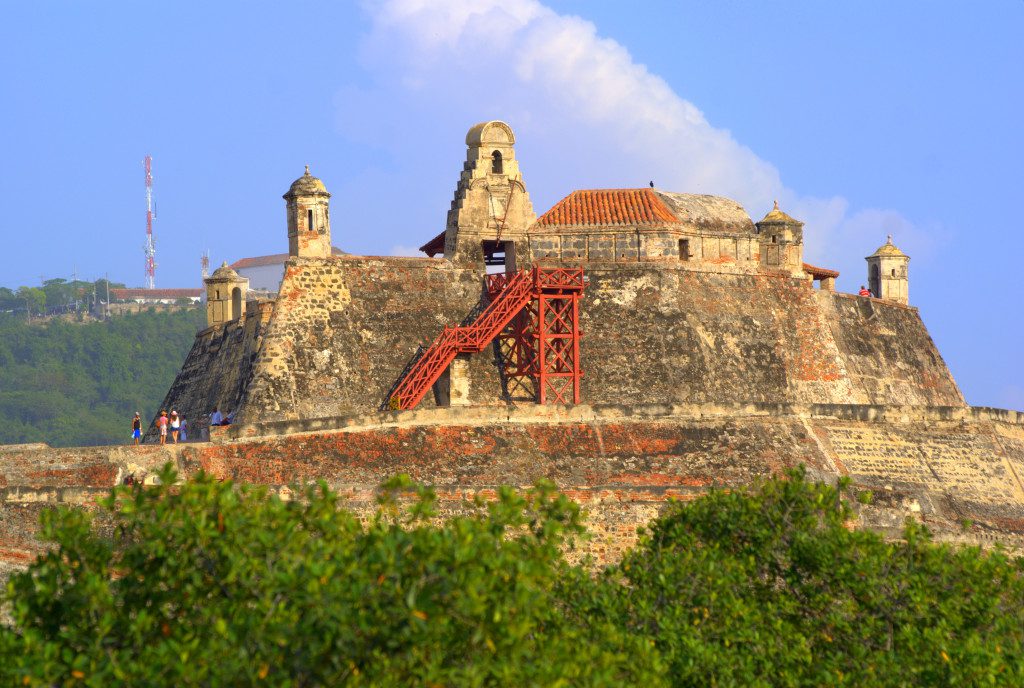 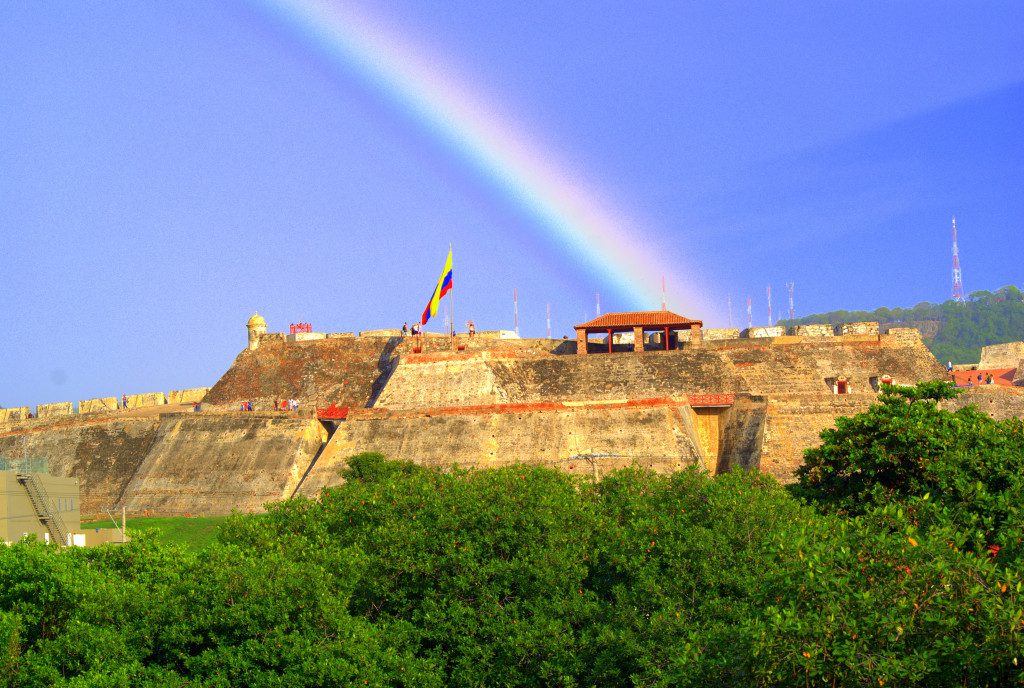 The day ended with another spectacular meal in the old city before our hosts  got us back to the hotel for another good nights sleep before day three of the whirlwind tour. 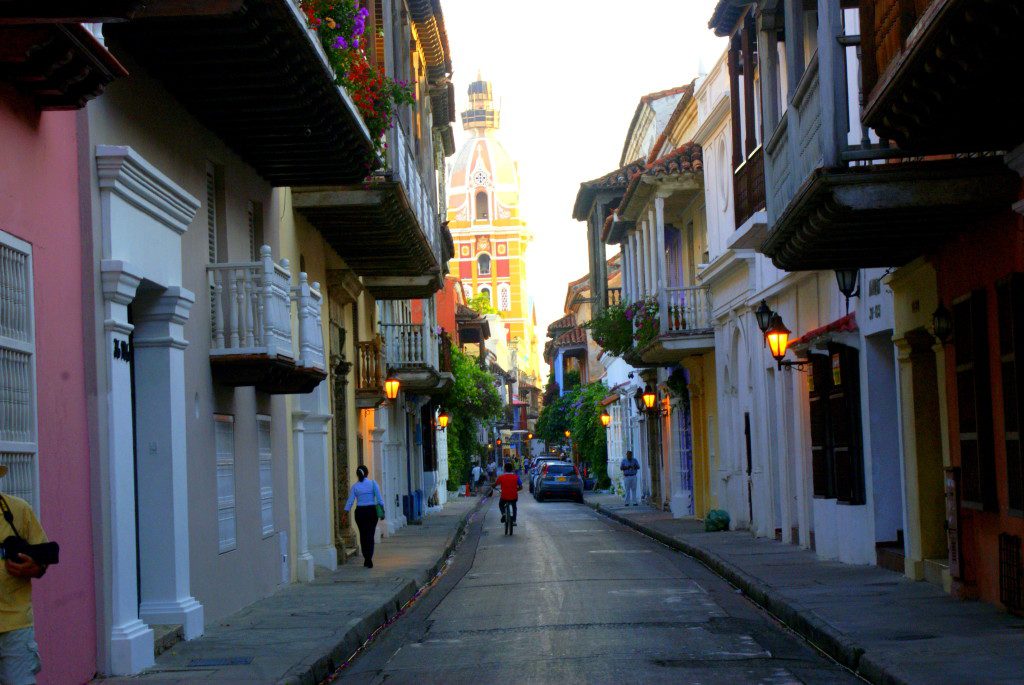 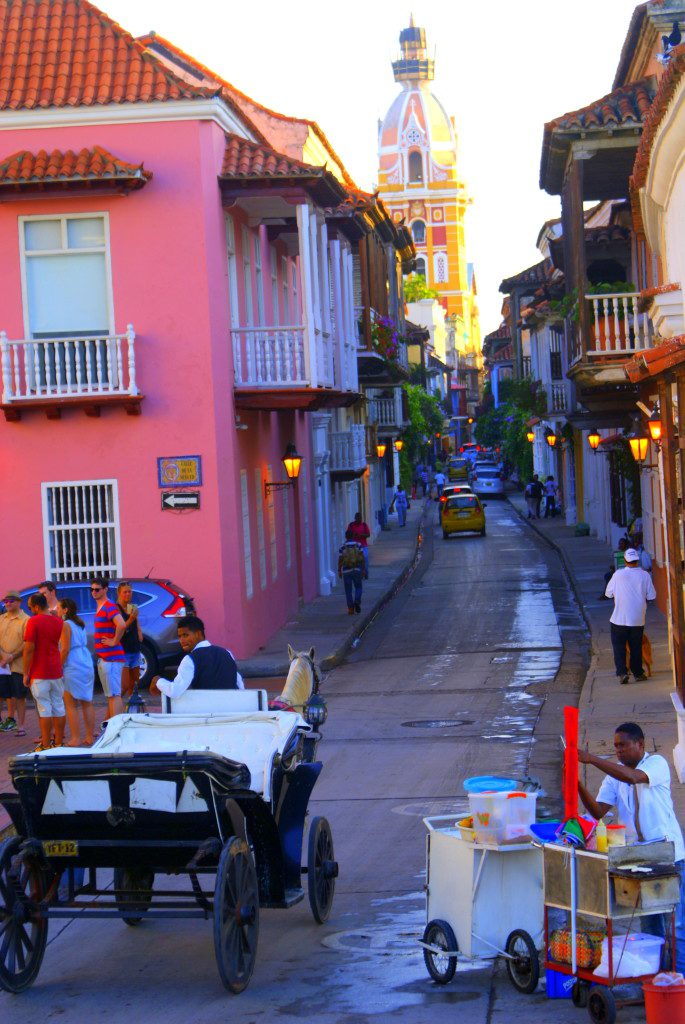 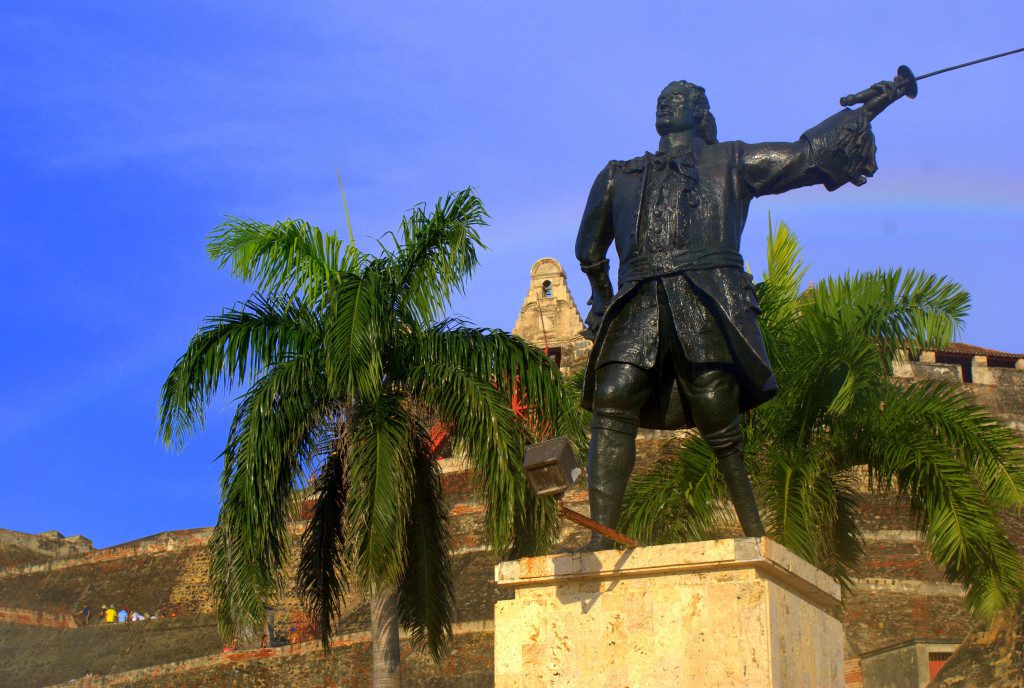 Determined to provide as full an experience of this beautiful area as possible, the ProColombia crew picked us up at 8 AM and took us out to the dock for our boat transportation to the beautiful Hotel San Pedro de Majagua, another unique hotel that is on one of the Rosario Islands, close to Isla Grande Beach and the Rosario Islands Oceanarium. The hotel experience offers some great white sandy beaches and the chance to take in scuba diving or snorkeling.

The boat ride was about an hour, and along the way we got to check out some more of the ancient forts that once protected Cartagena, and also got to see the beautiful city scape of the modern city. 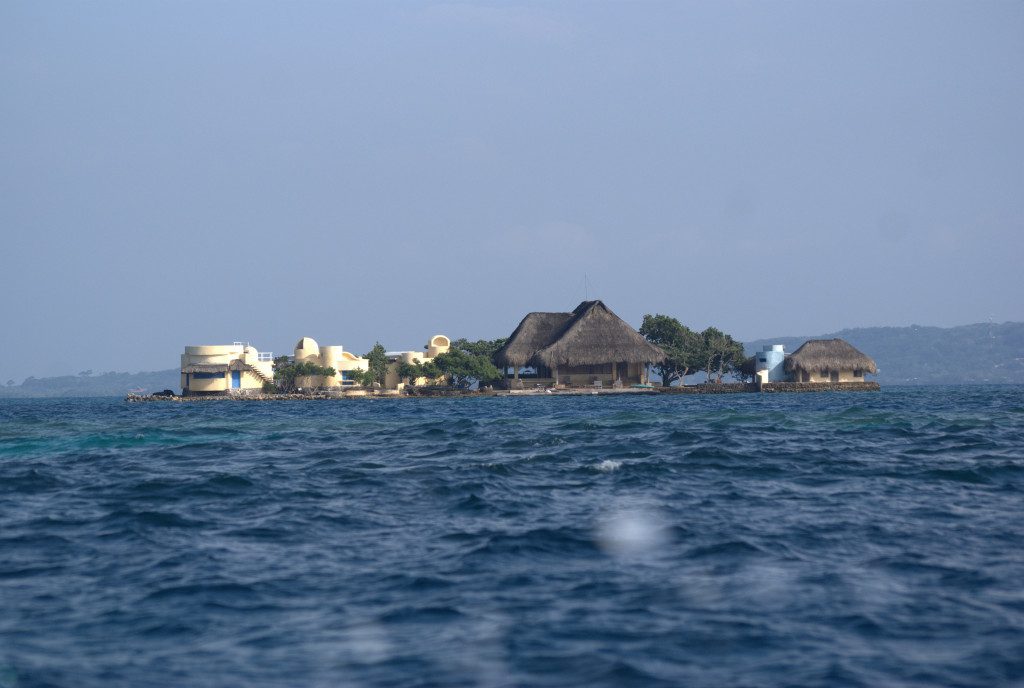 Day three ended with a few minutes at the beach getting to watch the spectacular sunset before heading off for another excellent dinner in the old city. The next morning was another early start – this time back to the airport and home. My flight path this time went through Miami, once again proving to be a full day’s worth of flying. 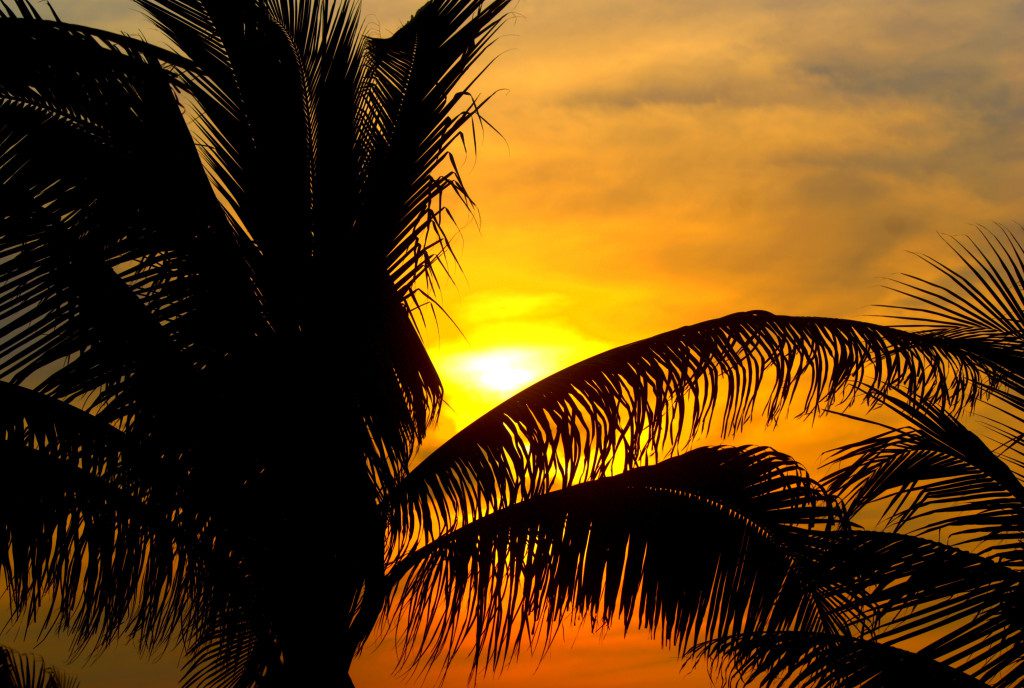 While it was a whirlwind trip, I certainly had enough time to be convinced that Cartagena offers a wonderful vacation opportunity that combines the beauty of Caribbean beaches with the romance and charm of Cartegena’s spectacular old city. The trip was enough to wet my appetite and leave me wanting to return, for sure. For those looking for a chance to combine a tough (while the 70.3 course will be relatively flat, it is going to be hot!) race with a fantastic, unique vacation, Cartagena is definitely worth a look.