Nicole Deboom had an epiphany while training for a triathlon—and she ran with it. Deboom, a professional triathlete who won Ironman Wisconsin in 2004 (and is the wife of two-time Ironman world champ Tim Deboom), saw her whole life change when she started her own business, Skirt Sports. And the skirt fit.

Here’s what she had to say about starting a business from nothing but a great idea:

1) Just get it done. Nicole was training one winter and ran past her reflection in a window. She realized how uninspired she was by the way she dressed while exercising. “I had an epiphany run,” she told me. “Which, I think happens to a lot of people—they just don’t do anything about it.” But Nicole did do something about it. She immediately went home and started brainstorming in her journal. Nicole said, “I wrote the word ‘pretty’ and thought: I want to start a women’s clothing line that’s sassy. Something totally different.” Not long after, Nicole had a prototype made for a running skirt. She wore the prototype when she competed in an Ironman in 2004, and the rest was history. “I heard the crowd shouting, ‘it’s the skirt!’ as I passed. I won the race: my one and only Ironman.”

2) Keep Focused: No junk miles. Nicole brainstorms in a unique way. She writes down a lot of ideas, and then narrows it all down to one. For example, she knew she wanted to start a women’s clothing line that made women feel good about themselves, but her idea was too broad. “My husband brought me back to reality” she told me. “He said, I think you should focus on that one thing in that little scribbled notebook of yours that really epitomizes the concept. So I said, ‘oh, it’s a skirt!’ No one’s ever done it before.” The idea of eliminating “junk miles” is an important one. It is the difference between success and failure. To succeed, you need to block out all the noise. Focus on chasing the deer to get the food.

3) Keep going and have a flexible mindset. Take everything one step at a time and don’t plan too far into the future. Nicole takes an “aid-station approach” to business. “If you start thinking, ‘I’m going to do mile 26,’ you’re not going to get there,” Nicole said to me. “You have to get to mile 1, 2 and 3. And you stop, you take a drink, you slow down a little. You reassess and make sure you’re on the right track. Keep going; make adjustments if necessary.” Remember to focus on the journey to the finish line. Don’t focus on crossing it until you get there. A long plan for the future means more time to talk yourself out of it. Nicole told me that you need to have a flexible mindset. Don’t make predictions about who your customer is, for example. Take everything one mile at a time.

5) Know in your heart and mind that it’s going to work. If you don’t believe you’re going to make it, you won’t. If you’re not passionate about what you’re doing, you won’t be giving it your all. Giving 100% is necessary to success. Nicole said “if there is any doubt whatsoever, you don’t even need to take one step down the path. Because if you don’t believe in it 100% you’re not going to make it. That’s my little secret.” Nicole’s business is so successful because she loves what she does and gives every day her all. She treats her business like a competition, and she has her eye on the prize.

6) Not everyone will love your product. Keep your head up. Nicole faced some backlash for her running skirt. “If you look back at forums, people were up in arms,” Nicole told me. “They didn’t think it was for serious athletes…and there were women who said, ‘Why should I have to care about how I look?’ And I said, I don’t care if you care—I just want to look good for myself.” But there will be people who love what you do. “There were so many women out there who said, I’m with you Nicole, what took you so long?” Don’t be discouraged by the people who aren’t big fans of what you do. It happens to everyone. Keep going and be encouraged by the people who support you. 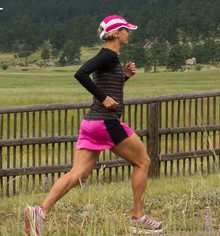 Nicole wakes up at 5am and just gets it done; she doesn’t take no for an answer. She bites off bite-sized pieces and doesn’t look out so far that it’s daunting. She does her work with 100% of her heart and gets organized, no junk miles. Being an entrepreneur is difficult, but with the right tools, you are guaranteed to perform your best.

Obstacle race series Spartan Race had more than a million participants in 2015.