The men’s field at Oceanside is impressive, with 49 athletes toeing the line on Saturday March 26th to contest this year’s event. As the first Ironman event of the year in the US, as well as the easy proximity to the main North American triathlon media outlets, Oceanside always boasts a large amount of hype and excitement. The field never fails to justify this early season attention. It’s good news for Canadian long course racing that inside the top ten ranked male athletes are three Canadians, with two more Canadians in the field with a chance of shaking up the standings now and in the future. On the heels of Jeffrey Symonds’s outstanding win at Ironman Melbourne, Canada has a lot to look forward to in men’s long course racing. Here is a look at the men’s field with some insight into their preparation.

McMahon ended 2014 on a high note, winning Ironman Arizona with the fastest ever Ironman debut in November. Oceanside will be his season opener and he indicates he is on form for the early season race. “Oceanside has been the first race of the season for the last three years now for me. So I am always coming off a good winter training block in Maui and look for a good hit out that gets things going for the season. This year I feel I am coming in stronger and a bit sharper than the past two years.”

While in Hawaii, McMahon and his coach Lance Watson did some training on the Ironman course in Kona. They are planning a spring Ironman so the winter months were spent building towards that race.  The main 2015 goal for McMahon is Kona and all other races will be determined based on that event. He is planning another solid Ironman event and a good performance at the Ironman 70.3 Worlds. On his 2014 season, McMahon said, “Everything went pretty much to plan aside from having a back issue going into 70.3 Worlds.  So we (my coach and I) are trying to do the same things in order to be fresh and strong for Kona in the fall.”

Sanders kicked off Canada’s three Ironman men’s wins at Ironman Florida in November 2014. With one week off after that race, and one week of casual exercising, Sanders then got back to business training for the 2015 season. With some solid points in the bank from 2014, Sanders will enjoy more freedom choosing racing in 2015 and has decided to start with two 70.3s and Ironman Texas.

“I’m still kind of a newbie to the sport so I don’t have much expectation for myself at Oceanside. This will be the earliest I’ve ever done a big race, so I’m not entirely sure what to expect from my body. I will say, I’m swimming, biking and running in practice better than I ever have, so I’m excited to see how that translates on the race course.”

On his 2014 season he mentioned that his fourth place at the Ironman 70.3 World Championship was a highlight and that he noted the exact amount of time he was behind first place was equivalent to time lost in the swim. “I think the ITU guys are certainly changing the game. In particular, they’ve pushed the swim and the run to new heights, and as they continue to transition into long distance racing, it will only get faster. Where I think a long distance specialist has an advantage is on the bike. Becoming exceptional at a 180 km individual time trial can take many years. The ITU guys don’t have much time and energy to focus on honing this skill. Yet, I think Kienle proved in Kona last year that it is possible to put time into a large group riding together [legally].”

Wurtele is coming off a fantastic 8th place at the hugely competitive Challenge Dubai event. Both Heather and Trevor Wurtele have the Challenge Triple Crown in their sights for 2015 and both had a great kick off in February. Wurtele had this to say about Dubai, “It was a good race for me and I definitely met my goals there. I figured top 10 in that field would be a great race, but looking at the start list beforehand I had my doubts that I’d be able to pull it off, even with a good day. Turns out the winter of training went well and I found some improvement on both my run and ride. Couple that with a few guys that had been racing hard without a winter break and I managed to grab 8th place there.

“I want to get back on the top step at Ironman 70.3 New Orleans this year. I’ll also be lining up at Ironman Coeur d’Alene with the goal to win there. Aside from that, I think if I can race like I did in Dubai for both Oceanside 70.3 and St. George 70.3, I could end up on or near the podium at those two races. I’m not planning on doing a second full Ironman this year. I think come 2016 I’ll put more emphasis on racing well in Kona. For now though, I just want to win some more races.”

Wurtele felt he had a mediocre 2014. “I never really felt like I was able to put together a consistent block of training, and really struggled on a lot of my training runs and rides. I still managed to race fairly well all year (ed:there were multiple top three finishes), but there was really something missing. I just could not dig deep at all. Ever. I pin that issue on not taking any time off during the winter of 2013/2014. I finished Ironman Arizona 2013, took 10 days off, then joined up with The Triathlon Squad’s December training camp, which essentially led into a hard winter of training. That started to catch up with me in training come February.”

For 2015, he took two weeks completely off after Chattanooga in September then another three weeks of one workout a day fun exercising: mountain biking, hiking, really short swims. “That left me feeling really healthy and motivated come December. That ultimately led to what was one of the best winters of training I’ve ever had.”

The 2014 edition of Oceanside was the first race Kilshaw got back to form after a season ending crash in 2013. He followed that race with first place at Ironman 5150 Shawnigan and Banff, third at Ironman 70.3 Victoria and fourth at Ironman 70.3 Las Vegas.

In 2015 Kilshaw is looking to “move up a pack” in the swim, ride hard, and empty the tank on the run.  Kilshaw’s main season goals include putting all the pieces of an Ironman together in Texas, then again in Mt. Tremblant. On his Ironman goals, Kilshaw says, “I have yet to really “race” an Ironman; this year I think I can do it.”

This offseason, Kilshaw and his coach Muddy Waters have been closely monitoring energy levels and have added a few hard rides.  Patrice Lemieux at Squad Cycles made a massive change to his bike position so Oceanside will be the first attempt at putting these pieces to the test.

Going into Oceanside, Kilshaw is excited. “Right now I’m feeling nervous, scared, excited, anxious, and a little bit like a caged hen.  I’m expecting Oceanside to be a firecracker of a race and am looking forward to being part of the action.” 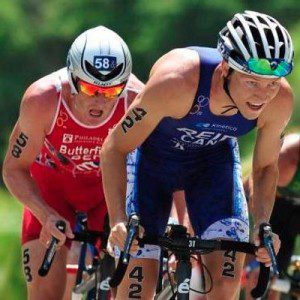 The highlight of Reid’s 2014 season was winning the men’s race at the Saskatoon 5150 chase race, beating both Jeffrey Symonds and Brent McMahon over the standard distance. With a sub- four hour performance at the Miami 70.3 his long distance racing is on track as he aims for top performances at 2015 Challenge St Andrews and Ironman 70.3 Cozumel.

For Oceanside this year Reid says, “I will be aiming for third or forth place but I will be very pleased with a top eight. My strengths in triathlon are on land; my best is the run.” Reid is still completing his degree, training with McMaster University in Hamilton, Ontario. Upon graduation he is planning to move to Poway, California to train with Paulo Sousa’s triathlon squad full time.