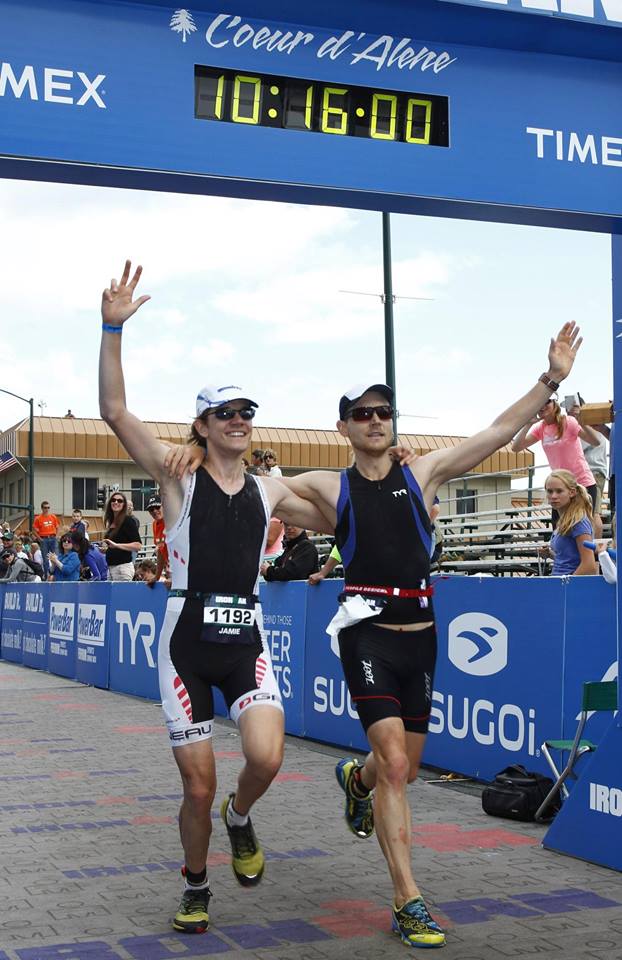 Most people would always want the best in life for their brother. The exception it seems, is if the small matter of a World Championship gets in the way.

That’s exactly the case for Tyler and Jamie Woodbury, who will be squaring up in the 25-29 age-group in Kona next weekend.

“The major goal is trying to get a top five finish in my age-group. Second is just beating my brother.” says Jamie.

The Canadian pair have both competed at the Ironman World Championships before, and they return this week to add another chapter to their rivalry.

Tyler, 27, is now based in San Francisco, Calif., and was the first of the brothers to take up the sport. A competitive sailor growing up, he turned his attention to swimming and biking at university and took on his first triathlon in 2011. Enticed by the rawness of endurance sport and his enjoyment of the individual disciplines, Tyler began training more consistently and stepped up to the full-distance in 2012 at Challenge Henley. He followed this up with a couple of good finishes at Ironman Wisconsin and Ironman France, in 2013.

By contrast, Jamie, 25, from Vancouver, B.C., has a sporting background that he describes as “couch potato” He had at least begun swimming regularly at university and had taken a bike trip. Having seen Tyler compete, he decided to give triathlon a go as well.

The pair settled in Vancouver together ahead of the 2014 season, and Tyler believed they could both qualify for the World Championships that year.

“He just told me, ‘I’m going to try and qualify for Kona this year. If you just do everything that I do, you can make it too.’ I thought it was insane.” says Jamie.

This seemed to resonate with Jamie and soon enough he had fully committed to the process.

“I was basically acting as his coach, forcing him to get through all the hard training.” says Tyler.

Their target race was Ironman Coeur d’Alene, and the hard work paid off. They finished first and second in their age-group, with Jamie, in his first Ironman, taking the victory by 40 seconds. With that result, both had secured their place at Kona. There was another close finish later that year at Ironman Mont-Tremblant, with Tyler beating Jamie as they came home second and third.

The World Championships provided a stern test, but proved equally close. The crowded swim, and the dynamics on the bike caused by so many high quality athletes being on the course, made for a tough race. Despite this, the brothers had fantastic results with Jamie finishing sixth, less than 90 seconds ahead of Tyler in seventh.

“I was thrilled about that for all of about 30 seconds, before I realised I was one spot off fifth. So we decided to go for another hard season and try to break that top five.” says Jamie.

Shortly after Kona Tyler moved to San Francisco and didn’t train or race seriously as he focussed on settling into a new job.

Jamie continued to target a Kona spot. He was back in the pool just a week after the 2014 race, and won his age-group at Ironman Canada to secure qualification. The 2015 World Championships didn’t go entirely to plan for Jamie. He still came ninth in his age-group, but was slower than the previous year, saying, “I took no time off at all. I just burnt myself out. By the time Kona came around I was just done.”

As a result, Jamie decided to enjoy 2016. He went on a bike trip through South America and just enjoyed training without the pressure of a full distance race to prepare for.

That year Tyler returned to regular training, but his season was hampered somewhat by injury. Nevertheless, he planned to race Ironman Muskoka. Unfortunately, that race was cancelled. As compensation, he was placed in a lottery for a Kona spot, and ended up winning a place in the World Championships for 2017.

Jamie had found a refreshed motivation to train, saying, “I couldn’t resist the thought of racing it with him on the Queen K one more time.”

The pair decided to race Ironman Canada, and Tyler was able to relax a little with qualification secured.

“Going into this year I could test myself a little bit and take some risks in the races.” says Tyler. “We both did Ironman Canada. I was there to experience the race and have fun with Jamie.”

Jamie finished second, with Tyler in third, so they would again be heading to Hawaii together. The brothers have the same coach, Noa Deutsch in Vancouver, and share a group of triathlon friends from when Tyler also lived in the city. Everyone involved is expecting a tight race.

“Right now across swim, bike, run we are almost identical.” says Tyler. “Ideally we come off the bike in a similar spot and we can run together. It’s great to have someone there to push you.”

Both Tyler and Jamie are hoping to come home with an Umeke, one of the traditional Hawaiian fruit bowls given to top-five finishers. Given how close their races seem to be, it wouldn’t be surprising to see them battling it out down Ali’i Drive on Saturday afternoon.