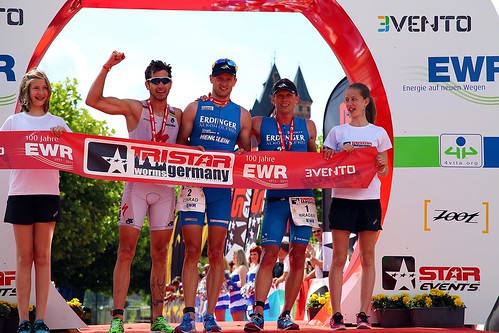 Over 700 athletes raced the third edition of the TriStar Worms-Germany in the heart of Central Europe in one of the favourite TriStar events.

With best weather conditions, both Germans Fabian Conrad and Nina Kuhn took the victory today at the TriStar111 race (1km swimming, 100km cycling and 10km running). Conrad got the triumph after an impressive cycling segment, where he kept the first position after emerging from the water as the first athlete. Fabian Conrad (3h23:54) was leading the race from the word ‘go’ till the finish line. German Christian Brader was second and worked hard on the run to catch the leader, but Conrad today never looked back and pulled away from the rest of the PRO field since the start. Till Schramm, official TriStar Ambassador, after a good performance in the bike leg, overtaking some athletes, finished third in Worms.

This year it was the first time with the new bike-track, wich lead the athletes through Worms twice as well as through the surrounding wineyards thus more interaction with the spectators was given. “After the first round I was actually already done, but all the viewers pushed me”, mentioned Christian Brader. This applies to Fabian Conrad as well, who was able defending his lead in the following 10 km run through Worms. “Running was quite hard, since during bike session I had to match against strong competitors. Winning the todays race was not planned. I’m looking forward to the brief regeneration based on the TriStar distances”, he said.

In the female category German Nina Kuhn won the TriStar111 Worms-Germany. She took the lead right at the beginning of the race and kept it till the Finish Line at all times, crossing it in 3h49:21. The local hero Anna Kusch was second almost 11 minutes back (4h00:35), while Nicole Best (also from Germany) was third.

Both winners of the TriStar33.3 Worms-Germany (300m swimming, 30km cycling and 3km running) were Germans: Marc Rink won the male competition in 1h17:30 and Carina Brechters the female category in 1h25:27. 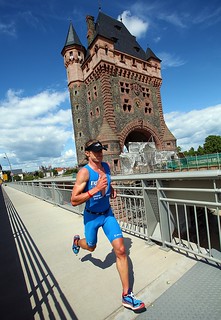 The TriStar label is presented by Star Events, a Monaco based company specializing in organizing high quality sports events that are focused on fun, social responsibility and environmental protection.