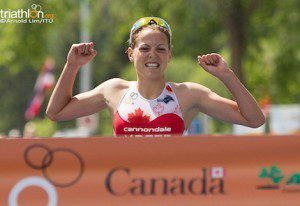 We continue our interviews with Team Canada athletes racing the 2015 ITU Grand Final. Here’s our chat with Quebec’s Amelie Kretz.

Taylor Reid: You have taken a long brake from ITU racing over three months. What have you been up to?

Amelie Kretz: Yes, I took a long break from ITU racing but unfortunately it was out of my control. The week before London I started to have a little niggle in my left thigh, I raced on it in London but then got a scan and was diagnosed with a femoral stress fracture. I flew back home and took seven weeks off running before I could start building my run again. I could still swim but I also had to take a month off riding.

TR: Was the plan to have large build up to this year’s Grand Final?

AK: The plan was to race Rio, Edmonton and Chicago but it can’t always go as planned! I was lucky to go to Rio with Triathlon Canada during the test event to ride the course and get a feel for the place. After Rio, I was almost done with my back-to-run program and was able to start doing some workouts on the bike and little bit of intensity on the run too.

TR: Were have you been training out off to get ready for Chicago?

AK: After Rio, I packed my bags and headed to Vitoria-Gasteiz, Spain to train with Jamie Turner’s group. I was able to put in a decent block of training there and continue to build my running.

TR: Since you missed Rio Test event, Chicago must be you’re A race this year. How have you prepared for it?

AK: Chicago is definitely an important race. But since I just got back from injury, I am not putting any pressure on myself, I am going to go out there and execute a good race and get some experience since it’s my first senior World Championships, and see what happens! We did some Chicago specific workouts on the bike that were really fun, some criterium type workouts with lots of u-turns and corners!

TR: Will you be doing some late season races this year?

AK: Even though I got injured in the middle of the season, it’s been a long season that started in early March so I decided that this was going to be my last race of 2015. It is time to rest up and get ready for 2016, the most important year.