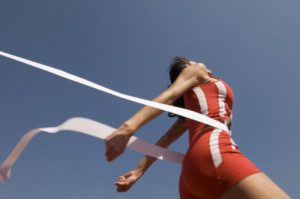 Triathlon, ‘the fastest growing sport in the US Olympic Movement’, has been approved by the NCAA Division I Legislative Council to be the next Emerging Sport for Women. This is a watershed development for the sport. It launches an essential Olympic stream for student-athletes.

The announcement was made during the 2014 NCAA Convention in San Diego, California following a vote that was 95 per cent in favour of the move. Triathlon will be added as an autumn/fall sport in the US, and school athletic departments will be able to form teams and compete at the varsity level beginning in August 2014. A sport recognized by the NCAA  as emerging can be used to help meet the NCAA minimum sports sponsorship requirements, minimum financial aid award requirements, and gender equity standards.

Although it’s been 42 years since the passing of Title XI this development is a direct result of that groundbreaking legislation. Three-time US Olympic swimmer Natalie Coughlin explains the importance of having access to a competitive collegiate career prior to the Olympics:

“I don’t know what sports were like before Title IX but I know that it’s had a tremendous impact on my career, just given me the opportunity to compete at the college level. And had I not competed in college, I would have retired at age 16 and all of my Olympic medals are from age 21 and on…Title IX has had its hands in a lot of my life and in ways that I will probably never realize.”

It will be exciting to watch talent like Coughlin emerge in triathlon.

“After four years of hard work behind the scenes, this announcement represents a huge victory for current and future student-athletes, for the NCAA member institutions that will operate varsity triathlon programs, and for USA Triathlon’s future Olympic success.”said Rob Urbach, USA Triathlon CEO.

USA Triathlon (USAT) notes that, as an NCAA sport, triathlon will create opportunities for varsity and general public competitions and could yield significant revenue-generating opportunities.

The NCAA is committed to integrating athletics and higher education for a more comprehensive college experience.