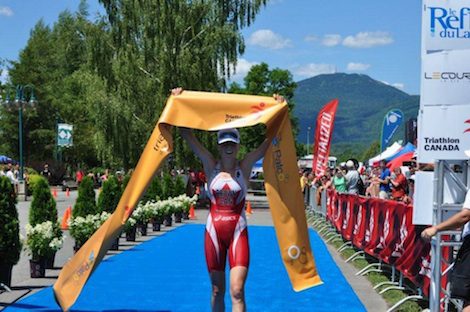 Carp, Ont.’s Joanna Brown  just missed the podium this past Saturday at the Olympic distance Pan American Championships in Dallas, Texas. Coming out of the swim behind the lead group , Brown drove the chase pack to catch the leaders. The  21-year-old won a silver medal in the race two years ago, was in third and fourth for most of the 10-kilometre run but was forced to overcome a penalty she encountered for not putting her swim goggles in her bin in T1. Despite this, Brown still managed an impressive (2:00:32)  for fifth. Amelie Kretz, of Blainville, Que., was back on the start line after missing some time with a foot injury. The foot issue, however, forced Kretz to drop out on the run.

“There were obviously some positives for everyone, but it was a tough day for us all around,” said Craig Taylor, coach of the Guelph Regional Training Centre. “Joanna really drove the pack hard on the bike so that was good, but it wasn’t our best day. We need to lick our wounds, try and figure out what went wrong, and keep going forward.”

Mexico’s Adriana Barraza set the time to beat in the women’s elite field at 1:59:41. Jessica Broderick, of the United States, thrilled the hometown crowd after clocking a silver-medal time of 1:59:51. Bermuda’s Anahi Leon snagged the bronze at 2:00:08.

John Rasmussen, of Ancaster, Ont., was the top Canadian in the men’s elite field. The 22-year-old placed 19th at 1:50:51. Mexico’s Crisanto Grajales won the men’s race with a time of 1:47:09. Earlier in the day, Jeremy Briand of Sainte-Julie, Que.,took silver in the junior men’s sprint distance race. Briand completed the 750-metre swim, 20-kilometre bike and five-kilometre run course with a time of 55:19. Briand finished 10 seconds back of winner, Manoel Messias of Brazil who clocked in at 55:09 for the gold. Mexico’s Eduardo Israel Lamas Hernandez claimed the bronze medal at 55:30.

National Development Team athlete, Xavier Grenier-Talavera, of Vaudreuil, Que., was the only other Canadian male in the top five. The 19 year old finished just four seconds off the podium in fourth place at 55:34. Two young Canadians grabbed the final two spots in the top-five in the junior women’s sprint race. Toronto’s Kirsten Vergara was fourth at 1:02:45, while Emy Legault, of Ile Perrot, Que., ran to fifth spot at 1:02:53.