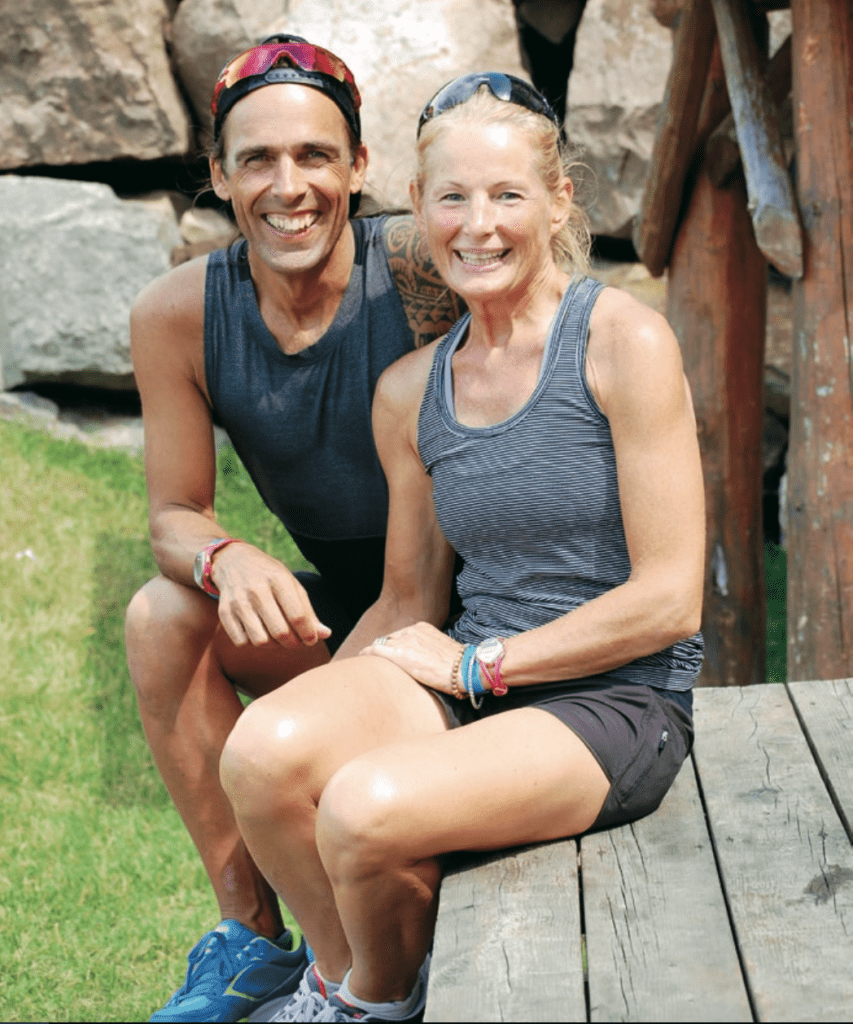 Those who play together, stay together. No Canadian tri-racing pair better typifies that saying than Montreal-based Katherine (Kat) Calder-Becker and Kevin Becker. The married couple, both now 50, inspired each other in their late 30s to transform into serious competitors. Kevin’s alteration was quite dramatic. At the age of 37, he quit a two-pack-a-day smoking habit and gained 65 pounds. A triathlon on television inspired Kevin to start working out again. With Kevin being a non-swimmer, and Kat not familiar with running or biking, triathlons didn’t seem like their most intuitive choice. Yet, what they lacked in skill they made up in grit.

Twelve years later Kat and Kevin each have 17 Ironmans and four Ultramans under their belts, having both completed their second Ultraman World Championships in Kailua-Kona Hawaii in 2014. As if Kona weren’t enough, they’ve also each conquered the Grand Canyon Rim-to-Rim-to-Rim Run (an 80 km trek with an eleva- tion change of 20,000 feet). They’ve both earned a Rudy Award, a quintessentially Canadian honour for finishing a five-race set consisting of the Winterlude Triathlon (8 km of speedskating with 5 km of cross-country skiing and 5 km of running), the Keskinada Loppet (a 50-km ski), the Rideau Lakes Tour (a 360-km cycling loop from Ottawa to Kingston), a marathon, and a full-distance triathlon all in one year. While holding down full-time jobs, and parents to Cassie, 23, Kevin and Kat also coach triathletes and lead running groups with Lululemon.
Triathlon Magazine Canada sat down with the couple at one of their clinics at last August’s Wanderlust Festival in Mont Tremblant, a gathering of gurus who incorpo- rate yoga and mindfulness into their fitness routines. The pair says yoga, which they took up only in the last year, has enhanced their breathing while racing and released tension between races.

“It’s definitely a switch from Type A to Type Z, where the Z is for Zen,” says Kevin with a laugh.
“There is a sort of reluctance to give up that competitive edge. You know, going from workout to workout while not realizing you are carrying a lot of tension,” says Kat. “When we are on our mats, yoga helps man- age stress and quiet the mind’s chatter.”

While warrior and downward dog poses have opened up their minds and diminished unhelpful stress, Kat and Kevin credit their impressive race resumé to determination and a sense of play. Kevin told his running students at Wanderlust that incremental progression doesn’t have to be boring. He encouraged his students to be creative with daily training by adding adventure.
“We shake things up between long runs or bikes. We take our strength training outside using free weights or our own body weight as we climb the stairs at Mont Royal or do core exercises in a beautiful park,” says Kevin. “You always want to keep the body wondering ‘what are you doing to me now?’ ”

With all that playful training and yoga tranquility, what are they like on race day?

“Race day is race day,” says Kat. “We will stop and acknowledge each other during the race, so it’s not to the point of obsession. But it is competitive.”

“I may be Zen on the yoga mat but on race day I have the instinct of a hunter,” says Kevin. “I go into a different zone.”

As usual, Kat and Kevin have yet another big race season ahead in 2015. To learn more about this Canadian pair, visit endurancetriathletes.com.

Tania Haas enjoys applying the teachings of yoga and meditation to her sprint triathlon training. She also writes about preventive health and world culture taniahaas.com