This program is written for a triathlete who has trained for and completed an Olympic distance triathlon and is looking to jump up the half distance. The program will build to a maximum of 13 to 16 hours per week, so the ability to comfortably train for 10 hours per week consecutively would be a good starting point to respond well to this plan. If the number of hours is challenging, stick to easy miles and downgrade some of the intensity to keep frequency up. Consistent volume will build greater long-term aerobic development, and should be a priority over speed work. It’s better to develop a robust aerobic engine for longer distances first, then start to fine tune it with higher intensity training later.

A professional bike fit is the best way to kick off training for a half distance, particularly if you’re just starting to ride a triathlon-specific bike. Having a good bike fit, and a comfortable saddle, will immediately improve your bike splits. Spend as much time training in an aerodynamic position as possible, particularly during easy rides, to make the most of your aerodynamic bike. 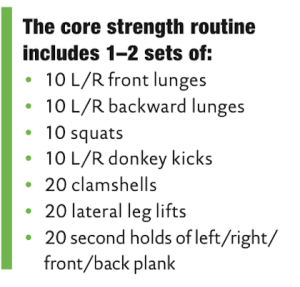 This program will build to a maximum of three hours of swimming, eight to nine hours of riding and three to four hours of running. The Wednesday frequency run can be substituted with water running for athletes who struggle running back to back days. Additional training for strength is also suggested, and will support the overall program when completed consistently. The core routine only takes 10 to 15 minutes and should be done after every run. Making it a habit to include this short, and relatively easy, routine into your program will be very beneficial.

Finally, if you don’t have a swim background, consider getting some professional one- on-one coaching to improve on your technique, as this will radically improve your speed and your ability to train. There is not a full day off in the three build weeks of this program but Monday and Friday are always designated swim days. One of those two swims can be an optional rest day whenever you feel your body needs it. Every four weeks there should be a minimum of one full day off.

The first month the main focus will be establishing some frequency in all three sports and preparing your body for training. For the swims, it is best to focus on your technique and building strength. Throughout this program, adding additional easy miles where you have time is fine, but don’t overload a week in such a way that you are too tired to complete the next one. In months one to three, the best weeks to add time are weeks three, seven and 11, as those weeks will be followed by a rest week.

In the second month of training we are going to introduce some strength work on the bike and some hills on the run while still building volume on the weekends. The bike interval sessions on Tuesday address both pedalling technique and strength. Improving these will prepare you for more intense training in future training blocks. The hill repeats planned for Thursdays are meant to improve running economy and technique. The focus for the Thursday run intervals is to keep your chest forward and your head up with a nice forward lean into the hill, while keeping your feet under your hips. For the bike and the run, repeats should always be evenly split or progress faster, to always practice finishing strong. For the swim sessions, start to increase the length of the session and incorporate some strong pulling sessions to build the strength component. A good set to include is 6 x 100 pull (preferably with only a band around your ankles) followed by 6 x 100 at moderate intensity with 10 seconds rest. 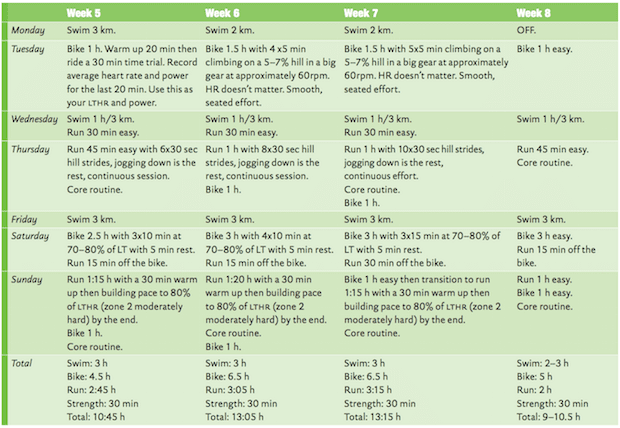 In the third month we will continue to build up the overall volume of the program. The efforts on the bike on Tuesday will move from force intervals to some threshold efforts to improve bike fitness and hills will still be used on the run but will be extended to one minute of effort for each one. For the bike efforts, make sure the effort either increases during the repeats or is evenly split. The best strategy is not to make the first five minute effort your best effort, but rather to make them the same or make the last one the best one. In addition, the quality of the long rides and runs on the weekend will be increased with a bit of zone 2 riding. This is less than race effort but more than an easy endurance ride. For the swimming, increasing a bit of the mileage during the week slightly and open water sessions are added. One swim session of the week should include some best average work where you work on your threshold speed. A set like 4x (5x 100m at best sustainable pace with 20 seconds rest) 1 minute easy between will be a good benchmark. 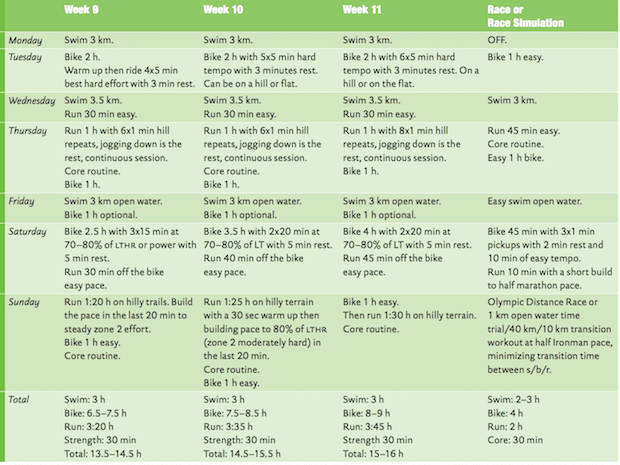 The last month will have one very long week, an easier week, then a moderate week before finally bringing the volume right down on race week while maintaining race specific intensity. The last two weeks will be all at half Ironman pace or easier and the week 13 goal is to push the volume one last time before the event. Maintain most of the swim volume right up to race week and incorporate some sets of 25 m fast sprints to work on mid race pace turnover. A key session to include open water is a solid set of 4×5 min at race pace where you have a set destination. Time yourself to make sure you do a strong even pace. 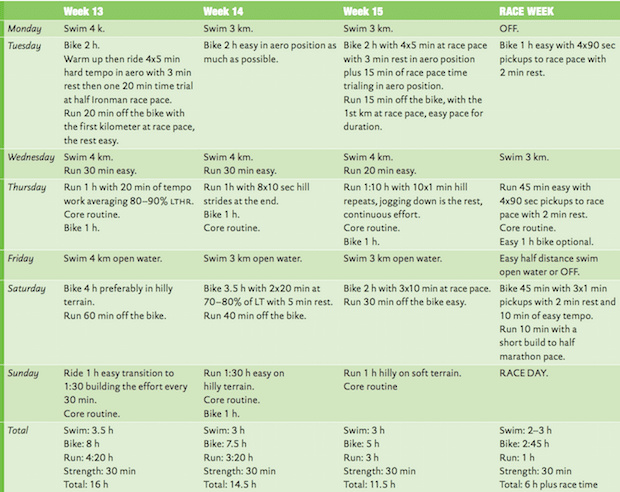