Local favourite James Cunnama and his girlfriend Jodie Swallow both won Ironman 70.3 South Africa this weekend. The new Uplace-BMC Pro Triathlon Team showed its power with a second and third place finish among the men. Will Clarke finished just 23 seconds (04:05:24) behind Cunnama (04:05:01) and Romain Guillaume (FR) who led for most of the race, rounded out the podium in a time of 04:06:24. 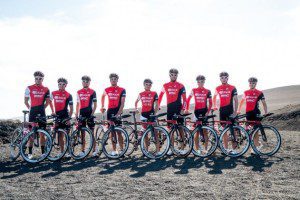 Clarke was satisfied with his season and team debut: “I’m happy. It is a great start to the year. My swim was good, but I had a bad day on the bike. That is not a surprise this early in the season. I just need more kilometers under my belt. Either way, I did what I could and after Romain passed me, I waited for the group. Towards the end I got really tired and got dropped from that group as well. The run, on the other hand, was great. I moved up quickly, working with James for a while, but in the end I didn’t have the gas to beat him. Still, I am happy with this result. As I am racing less this year, I want to do well in every race. Plus, we made it it a good first result for the team, so I am pleased.”