The inaugural Challenge Bahrain, a hotly anticipated and contested half-iron distance event from the Challenge Family series is finally here. This race is being positioned as the pre-eminent race for 2014 and has received a lot of buzz for its stellar professional line-up and $500,000 purse, the largest ever for a half-iron distance competition. The event also serves to invite travelers from all over the world to the Kingdom of Bahrain for sport. The 1018 athletes who filled the race to capacity come from 52 countries. Another goal is to attract local GCC athletes to try the sport of triathlon under the sponsorship of the Bahrain Royal Family including Sheikh Nasser Bin Hamad Al Khalifa and Dr. Saqer bin Salman Al Khalifa. There are 146 Bahrain participants are here and prepared to have a fantastic day on race day.

After a year’s preparation and nearly 2000 people involved in organizing the race, the Challenge Family is excited that race week has arrived.

Thursday featured time for the swim try-out, the press conference, and registration.

Today was the first day for the swim course reconnaissance. A few amateurs took to Bahrain Bay across from a number of the downtown partner hotels. The conditions were windy and there was a healthy amount of chop on the water as well as some currents to navigate. Not all the race buoy makers were in the water although there was enough evidence to portent a highly buoyant and salty protected swim that is anticipated to be calmer on race day as the weather settles.

The Challenge Family CEO Zibi Szuifcik who was in attendance today has put together a superbly competitive list of racers that arguably hasn’t been seen outside of established events like the Ironman 70.3 World Championship, the Ironman World Championship, or Challenge Roth. Since there were too many pros (43 male pros and 24 female pros as of press release today), the professional press conference consisted of in seated order; Dirk Bockel, Mirinda Carfrae, Caroline Steffen, Rachel Joyce, Jodie Stimpson, Pete Jacobs, Sebastian Kienle, and Michael Raelert. Not bad for the short list!

While other racers who are felt to in contention for the overall win like Tim Don, Nils Frommhold, and Brad Kahlefeldt were absent from the press meeting, there are many names that will be in the mix. On the women’s side, notables such as Radka Vodickova, Helle Frederiksen, and Lisa Norden will also no doubt be in the hunt for the overall victory.

Many of the invited guests downplayed their fitness due to the timing of the race at the junction between the end of the North American and European triathlon seasons and the emergence of the Australia/Asia tri season and the proximity to Kona and associated fatigue. 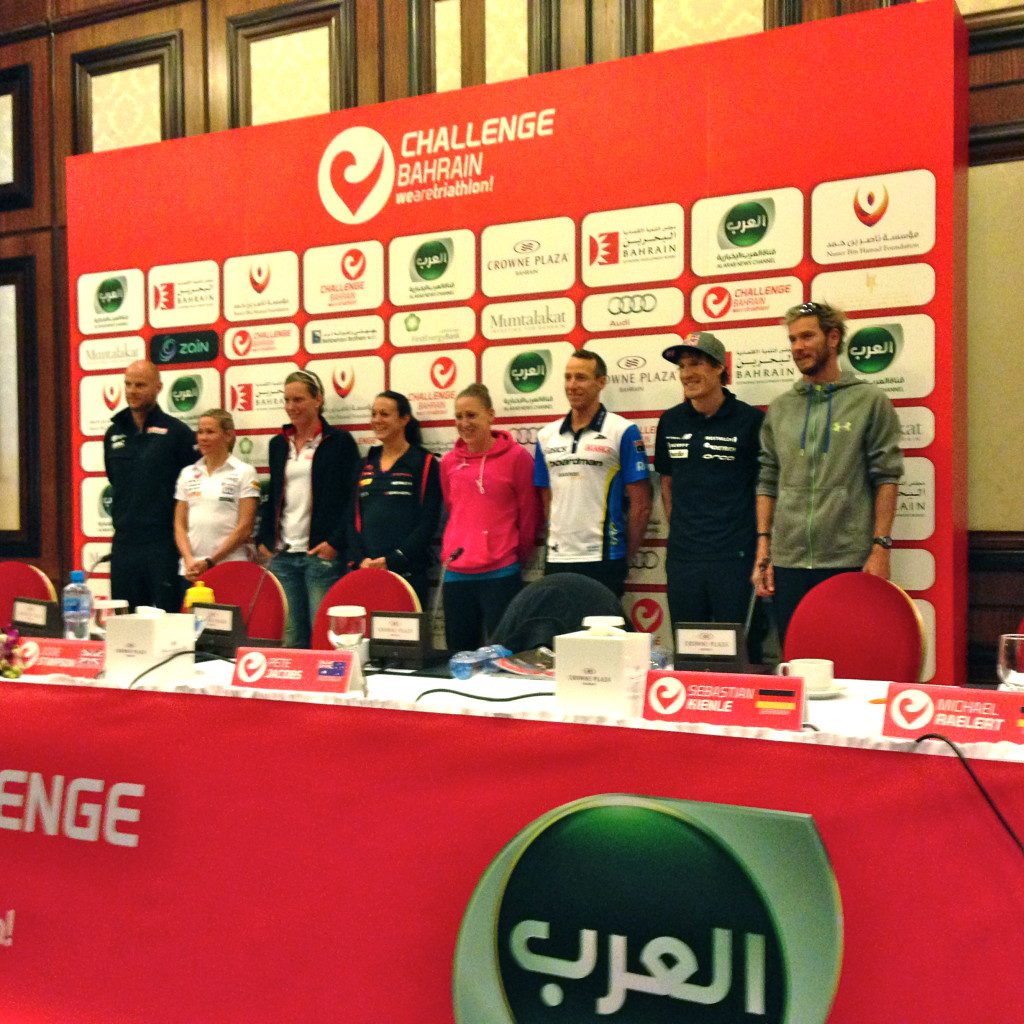 Here’s what a few of the big names said:

Dirk Bockel when asked what this race meant to him after a stellar win at Ironman Melbourne and an injury plagued second half of the season replied “this is bigger than Kona.” He has been focusing on this event where others have been focused elsewhere either at Kona, Hawaii or short course ITU World Triathlon Series wins. Dirk highlighted the depth and breadth of the amassed field of professionals and thanked the race organizers for hosting such an exciting and high profile event for the first time.

Mirinda Carfrae said she wasn’t fit to contend for the win and that she would work toward a top ten placing given what she called her contenders being in another league comparatively. Carfrae stated “I think I’ll get beaten pretty soundly.” Caroline Steffen’s retort was “I don’t believe her.”

Caroline Steffen, this year’s 5th place in Kona, previous two-time ITU Long Course World Champion, and most recently 2nd place at last month’s Mandurah 70.3 who has been doing well with the Australian season voiced her quiet confidence and didn’t name who she was worried about. “It’s going to be like Rachael [Joyce] just said, a nice mix-up and a surprise” as who the winner will be.

Rachel Joyce talked about being here to perform and having had a fresh change to her training since a 3rd place at Kona. Joyce said “I’m looking forward to throwing my hat in and going for broke.” She also was excited about the dynamics of the race being uncertain with the ITU, 70.3, and Iron-distance racers all vying for the title of Challenge Bahrain.

Jodie Stimpson is using Challenge Bahrain to build on her ITU 2014 successful season and Common Wealth Games Gold Medal achievement. This will be her first half-iron distance triathlon and she voiced that her excitement of racing with her idols combined with her tendency to race from the starter gun going off means that her pacing over the distance may not be dialed in yet. Stimpson acknowledged “I’m not really known for my pacing at the Olympic distance so it’s going to be a challenge.” She’s worked with Lisa Norden one of her teammates and her coach Darren Smith to prepare.

Pete Jacobs talked about the roller coaster ride of fitness and injury as well as the mentally demanding nature of constantly trying to perform at the top at each race. He voiced optimism about his conditioning this week. Jacobs said he “was well rested coming into this event” and the pundits and himself haven’t counted him out.

Sebastian Kienle said “Kona isn’t the end of the road for me,” and signaled his desire to push the pace and go for the win after injury took him out of contending for the 70.3 World Championship in Mount Tremblant in September. He came back to decisively win the Ironman World Championships in October.

Michael Raelert who has won the World 70.3 championship twice and then was side lined by a string of problems and who has bounced back to fantastic fitness with an almost world record paced win at Mandurah 70.3 with a time of 3:35:55, expressed his appreciation for his new acknowledgement that at his level of competition there are injuries and set backs and that he is racing for the enjoyment of it. He was picked by Kienle to be someone who has a strong opportunity to win on Saturday. Raelert said “I’m proud to be here and really happy,” about his return to form at the end of 2014.

After the press conference, registration and the expo were at the Bahrain International Circuit where the bike and run course will pass through the Formula 1 course en route to the finish line. The registration process was efficient and the swag bag very well done.

Tomorrow is the Friday bike check-in and a chance to chat hopefully with Canadian professionals Jeff Symonds winner of Challenge Penticton and 2nd at Ironman Canada this summer as well as Angela Naeth who has rested up for this race with a strong Ironman win at Chattanooga and proven power on the bike that has consistently contributed to her multiple 70.3 wins in 2014 including Hawaii and Buffalo 70.3 as they prepare for this spectacular prize purse and on the course that favours a fast overall time.     ​ 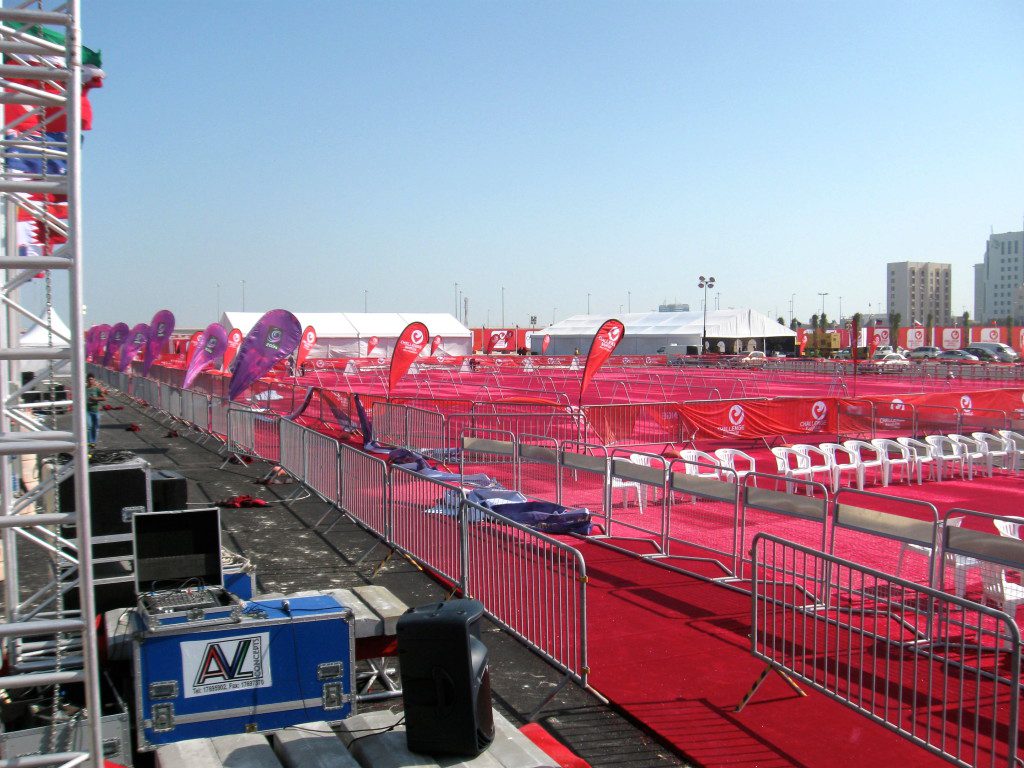