Guilio Molinari and Leanda Cave won the Cannes International Triathlon on Sunday proving the race is growing in depth and popularity. Canada’s Jenny Fletcher, who is coached by Cave and is the race ambassador took seventh in a strong field. 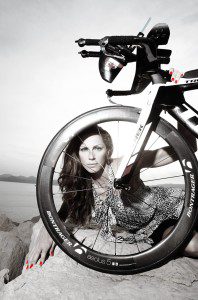 Cave showed her preparation for Ironman Texas is bang on as she dominated from the gun winning in 4:18:42. Belgian athlete Alexandra Tondeur was second in 4:22:20 and British athlete Vanessa Raw took third in 4:25:16.

In the men’s race, Molinari overtook Sebastian Kienle, Faris Al-Sultan and Romain Guillaume with a blazing ride over the technical course. Although he was quite a bit behind on the swim, Jan Frodeno came in second in 3:48:09 and Kienle took third in 3:51:15.

The swim in the gorgeous Mediterranean and ride up the maritime alps makes for a tough and stunning course. This year 50 spots were up for grabs for the prestigious lottery-based Escape from Alcatraz. Race director Manuela Garelli continues to make the race a top-notch event. If you are looking for an international event for 2016, this is definitely one worth considering.