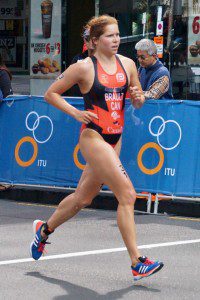 Sarah-Anne Brault completed her final tune-up race before the Grand Final by finishing 23rd at the World Triathlon Series stop in Stockholm, Sweden on Saturday.

With near perfect conditions, the 25-year-old Brault walked out onto the pontoon with the best triathlon women in the world overlooking Riddarfjärden City Hall with the sun shining and 19.4-degree water that called for a two-lap wetsuit swim.

Brault, of Quebec City, fought from behind the entire way while trying to recover from a difficult 1.5-kilometre swim in the choppy waters that featured a longer opening loop. When the three legs were all said and done, Brault stopped the clock at 2:05:48.

“The swim reminded me of Rio a little bit with the buoys really far out and it was tough to see what was going on. I had been training pretty good so I was expecting a better swim,” said Brault who was the lone Canadian in the field for the final European stop on the World Triathlon Series.

“I just settled into pack after the first lap (on the bike). The gaps got big and there was nowhere to go. I tried to stay at the front (of my pack) to keep the gaps small.”

The 40-kilometre bike course featured a unique cobblestone section, quick corners that allowed athletes to hit the pedals hard, and hills that tested the legs.

“I really, really enjoyed the bike. It was a blast. It would have been more fun at the front of the pack, but maybe next year,” added Brault. “The run was much better. There is room for improvement, but I was happy with my run today.”

The Americans grabbed the top-two spots on the women’s podium. Sarah True posted a winning time of 2:01:05, while teammate, Katie Zafares, was second at 2:01:19. Andrea Hewitt, of New Zealand, had a solid race running to the bronze medal with a time of 2:01:26.BraurBrault