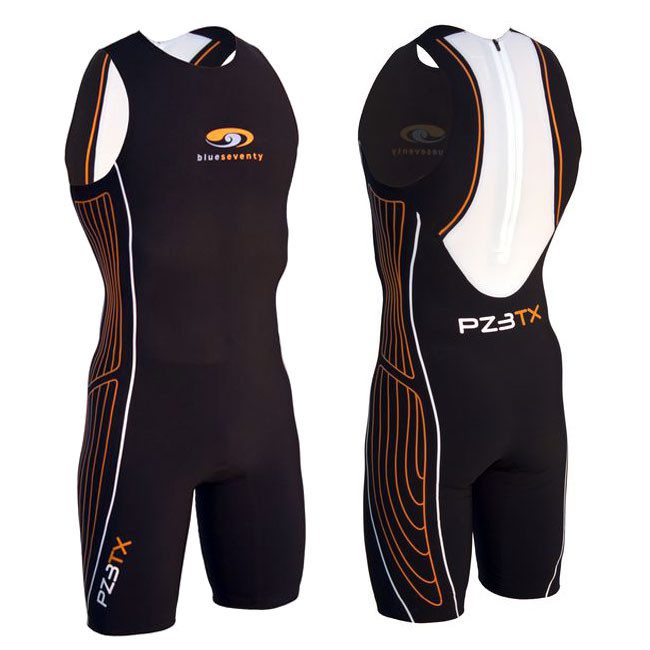 The swim, wetsuit and apparel company blueseventy announced that the brand’s swimskin, the PZ3TX  is “officially the most popular amongst the world’s best Ironman athletes.” The suit product count at the Ironman World Championship in Kona, Hawaii, last weekend “showed that more athletes chose blueseventy than any other swimskin.”

Although the blueseventy PZ3TX was the predominate model being worn, 50 athletes also received the new limited edition orange PZ4TX, which will be next year’s retail model. The company has worked hard at securing the dominant position and the brand loyalty was “reflected in the number of athletes choosing blueseventy in Kona.”

Sponsorship Manager, Ryan Vanderloop explained, “The PZ4TX came about from what we have learnt from elite pool swimming. We used a lightweight, compressive pool swimming fabric that transferred brilliantly into the open water.

“We have been developing and testing prototypes to enhance the PZ3TX for years; and we are thrilled the latest PZ4TX fabrics we have tested and chosen to use are outperforming our current PZ3TX.”

He added, “Former Ironman world champions, Leanda Cave and Pete Jacobs, tested it for us and were consistently swimming a lot faster than they had in the PZ3TX. Their comments were overwhelmingly positive on the fit, compression and performance of the new suit.

“The limited edition orange colour really made it stand out in Kona and that helped create a lot of noise and buzz around the suit.”

blueseventy’s John Duquette commented, “We really are over the moon to be the top swimskin brand once again in Hawaii. We’ve demonstrated to athletes that there’s a definite performance advantage to wearing a highly technical, fully welded swimskin, and we’re delighted that the best long distance athletes in the world want to wear our suit.”

He added, “The PZ4TX will be on sale next year. The plan is to produce it in blue but we are hearing a lot of demand for the orange following the weekend.”

The swimskin count showed over 400 athletes in Kona wore blueseventy–about 20 per cent of the field.