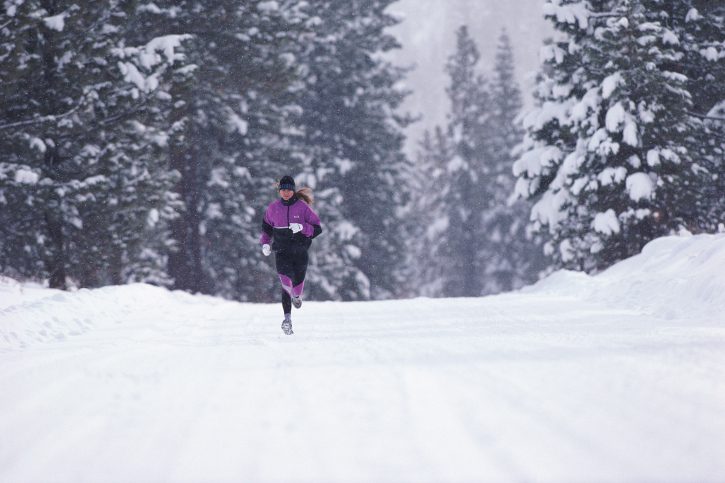 I will never forget being a runner in University. I think I owned one pair of tights, maybe a head band to keep my ears warm, I wore socks that doubled as mitts for my hands and a few cotton turtlenecks which were too stretched out to be worn in public anymore. To say I was underdressed and wearing the worst possible wicking and wind proof garments would be an understatement. And yet, I never missed a run and I really don’t remember complaining much about the weather.

Now, let’s fast forward to this decade. I have the best winter running apparel available – windproof, sweat wicking, base layer, mid layer, outer layers, mitts, gloves, masks, hats – the only thing my gear doesn’t do is wash itself – and yet, I am bundled up now more than ever and I cringe at those -10 degree days despite my more than adequate gear. But, once I get out, I am the happiest runner around and my very favourite winter running days are in the fresh fallen snow. Yes, winter running is tough mentally, but so rewarding in mind, body and spirit and on race day once the season finally begins!

Running is the one sport that you can do outside year round in Canada. Your pace might have to slow down because of the colder air on your lungs and the slippery streets, but pace isn’t as crucial in January or February, especially when you are laying down the base for the rest of the season.

So let’s start there — base aerobic running. If you have a spring marathon goal, then these long runs will be important, but they don’t have to be fast. You are building  your oxygen carrying capacity so  you will be able to fuel your muscles for the last hour of that 42 km event.  You will be surprised how hard you have to work on snowy trails or snow packed roads. Snow is a perfect tool to teach a runner to run with a high cadence and a on the mid-foot and forefoot. A shorter, quicker stride allows you to get through the snow with less slippage and, since you get on and off your foot more quickly, there is less muscular impact and you will run lighter and quicker.  This is exactly what you want to do when it is time to run fast during your intervals or races. When I raced Varsity cross country at the University of Waterloo, we used to do some training on sand dunes to build strength and reinforce good running form.  Snow and loose sand are really quite similar.

So, what runs should you be doing? Depending on your training goals, the long run is the single most important component of preparing for any running distance, particularly for a marathon or Ironman. Generally, you can increase your long run distance every few weeks by 10 to 15 minutes, but you can’t keep increasing it indefinitely.  Increase it for two to three weeks and then back it right off so that your body can adapt. Or maybe alternate a long run one week with a steadier shorter run every other week. Be careful not maintain regular long run routine for too long –  you cannot keep doing three hour long runs for four months leading up to your goal marathon or Ironman. You only want to run  that long during the last six to eight weeks before your main goal. Unless you are running a marathon in March, you probably don’t need to run over two hours in January or February. The better plan would be hold your long run duration, alternate it with some shorter tempo runs and increase the frequency of your shorter runs during the rest of your week. To challenge yourself, add in some hilly long runs on terrain that challenges you.  Base run training should be the main focus for about three months before you add any sort of speed.

That said, the speed work that can be done during this winter base phase is form strides or accelerations. These 20 to 30 second faster paced running strides are useful at any time of year because they reinforce good running form and technique for speed. They keep all of your tendons and ligaments strong and powerful despite your winter break from proper speed work and intervals. Generally, I will run easy for 15 to 20 minutes and then stop on a flat bit of road or trail, set my timer for 20 or 30 second and lean forward, get up on my toes and build to fast running. I practise a high cadence, quick feet, keep a tight tummy, maintain a slight lean and drive from my calves and butt. This is a great neuromuscular reminder to your body of how to run fast. In 2007, when I took three months off running in order to heal my Achilles injury, my running form felt off. My physical therapist, Steve Hill, had me re-introduce strides as soon as possible once I had been running pain free for a few weeks rather than add time and distance to my runs.

Winter is the perfect time to build the base of the pyramid which will support your triathlon season in 2018. The bigger the base, the higher the peak. If your base is well defined already, then start to add some hill intervals. If you want to add runs but fear injury, add water running to your schedule. And to give your swim, bike and run a real boost, add functional circuit training to your routine two to three times per week. Be careful of running on the indoor track. While doing a bit of speed on the track in shorts in January can be fun, especially with a group, you must have enough base running in the bank to support it. And if you are prone to injury, a 200 m indoor track can push the envelope. I would rather see you water running out of desire rather than side lined with injury.