Mastering flip turns in the pool can make you a stronger swimmer by allowing you to maintain speed and momentum in a workout and build strength. While open water swimmers and triathletes don’t use flip turns in races, the skills needed to perform them are transferable. For example, compare flip-turning to reaching the top of a hill on the bike. With the exception of specifically-structured hill workouts, a cyclist wouldn’t reach the top of the hill in a ride and stop briefly before continuing. Instead, they would use the increase in cadence from reaching the top of the hill to continue riding on with momentum. Similarly, the flip turn makes it easier to complete a long distance set in the pool, while adding the potential to develop power in the legs and improve speed.

Performing flip turns means there are no breaks or the subsequent lowering of heart rate. This maximizes what you take away from your time in the pool. The actual movements associated with a flip turn pay off in terms of their strength-building ability as well. A swimmer should be aiming to push off from the wall as powerfully as possible during the flip turn, a motion that is comparable to a horizontal squat. Continuously performing flip turns in the pool could translate into anywhere from 20 to more squats per swim session and squats build leg strength, an important facet of cycling.

Learning to flip turn can be as difficult as it is useful. Here are some steps to help you master this pool technique.

Begin somewhere in the shallow end, making sure you have enough depth to perform a somersault from a standing position. Practice the somersault as much as you need to ensure that you can perform it as quickly as possible. It is a three-step movement: first, tuck your chin into your chest; second, bring your knees into your chest to curl yourself into a ball, allowing gravity to roll you forward, but guiding yourself to a straight path so you end up vertical again.

Once you have perfected this motion, practice floating on your stomach with one arm out in front of you, and perform a somersault, but add in a sweep of the arm down to the bottom of the pool as you roll. 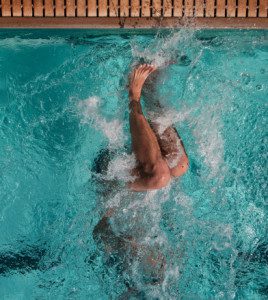 In the lanes of most pools you will see a black line ending it a “T” about two feet from the wall. This is to warn swimmers of the approaching wall and give them enough room to execute their turn. A good rule of thumb is to begin tucking your head for the turn right after your face passes the “T”.

When you initially perform the somersault at the wall, you will end up on your back. Therefore, it is important to practice pushing off and quickly gliding on to your side and then stomach from the wall. When pushing off, ideally your feet will be shoulder-width apart and your “squat” on the wall will mimic an air squat, meaning your hip crease falls below the knees to maximize your ability to produce power for the push-off.