As the Ironman World Championship approaches, many athletes begin a heat acclimatization protocol in order to be better prepared for the heat and humidity of Hawaii.

How do you acclimatize to the heat?

There are several ways to acclimatize to the heat.

Obviously, this is an option that requires a large investment of time and money.

Related: Why training in the heat is good

Another, more economical, option is to artificially simulate heat and humidity conditions at home. To do this, it is possible to train indoors, or outdoors, wearing more clothes or to train indoors in a heated chamber.

A very interesting study recently published by researchers in Norway (RØnnestad et al., 2022) compared the effect of acclimatizing to heat in a heated chamber vs. acclimatizing to heat by wearing warm clothes. They have demonstrated that both of these strategies are effective and both improve performance. Specifically, these two strategies have increased the amount of hemoglobin and endurance performance of elite cyclists.

Finally, another option is to acclimatize to heat passively rather than actively. So, rather than performing heat workouts you can perform acclimatization sessions in a sauna, spa or even taking long baths. It is even more effective to perform a sauna session after physical exertion since your body temperature is already high before you even enter the sauna. 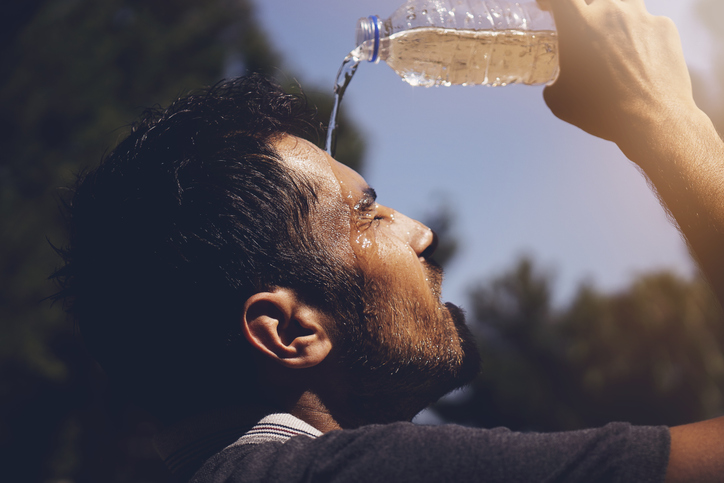 How long is needed?

What are the physiological effects of heat acclimatization?

The physiological effects of heat acclimatization are numerous and can improve performance, not only in heat conditions, but also in temperate conditions.

As mentioned earlier, heat acclimatization can increase plasma volume and hemoglobin. This is beneficial since more blood can be directed to the active muscles during an effort in order to bring oxygen to the muscles. It is generally observed that for every 1 g increase in hemoglobin, VO2max increases by 4 ml/min.

In addition, an increase in plasma volume results in an increase in systolic volume (the volume of blood that the heart ejects with each beat) and a decrease in heart rate for the same physical exertion.

Also, an increase in plasma volume is also beneficial since it increases the amount of blood directed to the skin to dissipate heat.

This improves the thermoregulation capacity (the ability to maintain a stable internal temperature).

In short, there are several effects to acclimatizing to the heat. However, it is important to go gradually and not to perform too intense workouts and at too high a temperature which could cause heat stroke. It is best to start with short sessions at low intensity and gradually increase the duration and intensity of the sessions, as well as the temperature in the heated room. It is also very important to hydrate well during, and after, acclimatization sessions. You might want to weigh yourself before and after the acclimatization sessions in order to know the amount of sweat lost (considering the amount of fluids drunk) to make sure you drink enough fluids after the session.