It took emergency crews three hours to get pro triathlete Janelle Morrison out of her car when it was hit and thrown 9 metres down an embankment off the highway near Revelstoke, B.C. in the fall of 2010. As she lay shattered and twisted, unable to move, Morrison had no idea of the generative power of stillness. At that time, it meant forced rest, entrapment, immobility and searing pain and, most importantly, it signified an obstacle to achieving her dream of being a world-class triathlete. Asking paramedics how badly she was hurt and if the injuries would affect her racing, Morrison didn’t know her body was so battered she would spend the next five days in a medically induced coma. Her medical team would tell her she may never walk again, never mind run, ride or swim as a professional athlete. An accident such as Morrison’s would have meant almost certain death for most people. But her fitness and strength very likely saved her. While her survival is described by doctors as miraculous, her injuries were extensive: a ruptured left diaphragm forced her stomach into the left side of her chest, she endured severe fractures in her ankle, femur, pelvis, forearm, multiple ribs, vertebrae in her low back, a concussion and extensive lacerations.

In what is one of the most inspiring comebacks the sport has seen, (documented in the film A Second Chance: The Janelle Morrison Story), Morrison defied the odds and silenced detractors by coming in third at Ironman Canada just two years after the accident. Being told she couldn’t do something only fuelled Morrison’s will to heal and race again. For the type A personality who was always on the move, the forced rest of that period of Morrison’s life was anything but motionless – her mind and spirit were on overdrive. She became completely dedicated to accomplishing the seemingly impossible.

One can only imagine what it must have felt like to finish that comeback race. The sense of accomplishment, the confirmation of inward belief, turning all the dedication, commitment and pride into an actual race result. And yet, when Morrison ran down the blue Ironman branded carpet, what she felt was nothing.

“It didn’t mean anything to me,” she explained. “It was an accolade, a result. Somehow I had missed the process, leaving me unfulfilled. I had been given a second chance at life and I was missing it. It suddenly occurred to me that I needed to stop and look around at my life – to be totally still and give myself permission, for the first time in my life, to be so. It was then that everything began to change.”

Learning from a master

Morrison discovered that day in Penticton what it was she had been running from rather than toward. Stopping running after 9 hours and 53 minutes of racing, buoyed by a pursuit that kept her focused for two years, Morrison realized that despite accomplishing a singular goal, she had lost contact with the other aspects of her life. The key, she finally understood, was to pause and take the time to embrace the moment. Doing so would broaden her perspective and deepen her connections with herself and those around her.

Another thing she finally understood was what her coach and mentor Mark Allen had meant about finding a rejuvenating moment of stillness during the Ironman World Championship in 1989. Allen has often recounted that pivotal race. Just as he was about to succumb to his body’s urge to slow down as he ran shoulder-to-shoulder with his greatest competitor, Dave Scott, something almost magical occurred. An image came into his mind that changed his race and would lead to a lifelong pursuit. The image was an advertisement for a shamanic retreat that he had seen in a magazine earlier. It featured the calm resolved gaze of Huichol shaman Don José Matsuwa. The peacefulness of that gaze had struck Allen when he first saw it, but entering into his mind at that precise moment, in the middle of the Queen K, while pushing an excruciating marathon pace, conveyed to Allen his own ability to find stillness even in a moment that was raging.

Intuitively, Allen borrowed from the symbolic respite of that image and went on to win his first Ironman World Championship by 58 seconds. He would eventually seek out the shaman and work closely with Matsuwa’s grandson and apprentice Brant Secunda for the next two decades. Allen credits his spiritual quest for infusing his athletic career with the success that had previously eluded him. The six-time Ironman world champion, named “The Greatest Endurance Athlete of All Time” by ESPN, knows a thing or two about the power of integrating mind, body and spirit.

Allen explained to Triathlon Magazine Canada, “Athletes want the quick answer to finding greatness. That is just not possible. It took me seven tortuous years to finally win my first Ironman World Championship title. Greatness does not come at the speed of Twitter. Brant [Secunda] really gave me tools to help build my inner strength over time. He taught me practices to create change at the speed the natural world works in. This was very different than what my competitors were searching for. They wanted to become champions in six weeks.”

Like her mentor, Morrison knows there’s no such thing as a quick fix. She also knows that with patience comes an appreciation for balance. She explains, “You can have a super fit physical body, yet if this isn’t coupled with stillness, your health remains compromised. You can dedicate time to stillness for your mind and soul, but if you don’t transfer this to a deep respect for your physical body (through exercise) your health remains compromised.” 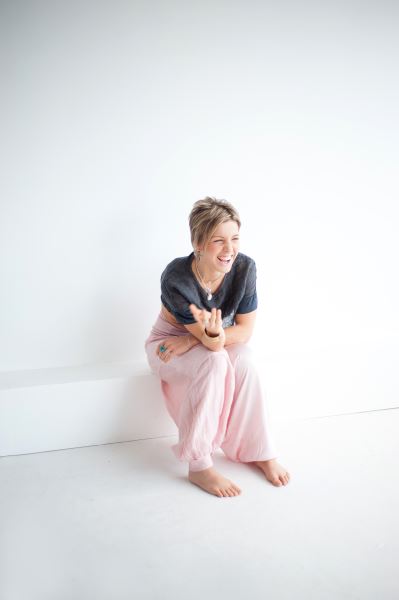 For an athlete, losing touch with oneself even for a split second is a recipe for disaster. Start running someone else’s pace and you could blow up. Let your mind and your eyes wander on the bike and you could crash. By contrast, being attuned to oneself allows for the seemingly effortless, focused intensity necessary for winning. But it also allows you to be fully present and capable of engaging meaningfully with those around you.

With a holistic approach to health and performance, Morrison believes athletes can access the best of themselves. She explains, “Think of health as a wheel with spokes. Each spoke symbolizes an aspect of health including the physical, mental, emotional and spiritual. As a triathlete, would you really even consider going to the start of a race with spokes that were wobbly? A wheel that is out of true? Of course not. It’s a no brainer that the healthier an athlete is, the better they will perform. Tightening the spokes of our health will allow for the best race and life results.”

While many forms of stillness (a leisurely walk in the woods, a Yin yoga class) would constitute the low intensity training that can help facilitate the adaption of high intensity training, it’s hard to quantify the benefits of stillness on the adrenal system or an athlete’s ability to balance psychological and emotional stresses which we know to impact the body in harmful ways. Yet many of us can point to any number of examples in our training and racing when life stresses took their toll and performance suffered.

“The practice of yoga,” Morrison explains, “always ends with a deep relaxation session called Savasana. This is where the power of the session is integrated. Why don’t we allow for the same in terms of cardiovascular fitness (running, walking, cycling, swimming) in order to maximize their benefits? Many athletes have learned to push their bodies past what they thought they were capable of, but many of those same athletes might find sitting still nearly impossible.”

For Morrison, that’s precisely the point. Exploring why it’s so difficult to sit still could take us to new heights as athletes and people.

In the film, A Second Chance, Morrison, a pint-sized powerhouse, looks into the camera with a quiet confidence and addresses her comeback: “I learned that my fears are complete bull. That was kind of an epiphany moment and I realized that there’s really nothing to fear at all. There’s only me putting limitations on myself.”

1. Have a plan.
Schedule stillness time into your life. This might be watching a meditation video or listening to soothing music or spending quiet moments in nature – the important part is just to have a plan. This leaves less room for excuses.

2. Consider your posture.
Most people tend to think a stillness posture means sitting crosslegged, spine straight and tall with the heart open, and this certainly is a great way to remain relaxed and alert while sitting. But you may simply want to lie down or lean up against a tree. Stillness doesn’t always have to “look a certain way.” Stillness is about connecting to yourself, not about “doing it perfectly.”

3. Pay attention to your breath.
It’s the ultimate tool for focusing. When your mind wanders, which it will do over and over again, bring it back to the rhythm of your breath. You can do this whether you are doing a stillness session, driving your car or dealing with a challenge at work. Your breath can bring you back to yourself.

4. Stay curious about the thoughts and feelings that arise.
We so often label things either good or bad. Curiosity opens up an exploration of discovery, while keeping it neutral.

5. Be gentle with yourself.
Enjoy your stillness time. Do whatever makes you the most comfortable, whether it means using candles, blankets, a certain posture, sunshine or music. It is up to you.

Suzanne Zelazo is the former managing editor of TMC