Triathlon training can be a lonely, solitary pursuit.

In contrast, cycling has been dubbed “the new golf,” reflecting the explosive recent growth in club memberships and in casual groups of friends and athletes training together with or without coaches. Cycling grants us extended time together when we can train and socialize with likeminded friends. This is particularly welcome when competition and many other athletic and social events that bring us together slowly emerge from the forced hiatus of the global COVID pandemic.

Cycling has continued to grow both in terms of all-age participation rates, and the expansion of activities beyond enthusiasts engaging in recreation and competition. Bike commuting, cycling to perform routine errands and other forms of engaging with the communities around us by bike all continue to blossom with no sign of slowing. The law, however, lags behind.

People on bikes are subjected to verbal threats, or even physical abuse, from drivers angry at groups of cyclists riding “two-up” in double-file. Even worse, groups have been warned, or even pulled over, by police, demanding that they ride single-file, with or without justification. Whether through anecdotal evidence or logic—particularly coupled with “one-metre laws” (previously discussed in the July issue of TMC)—experienced cyclists overwhelmingly believe that riding in groups, two abreast, is safest. Cyclists are more visible, and believe it is safer to widen and therefore shorten the length of a group that a driver seeks to pass. 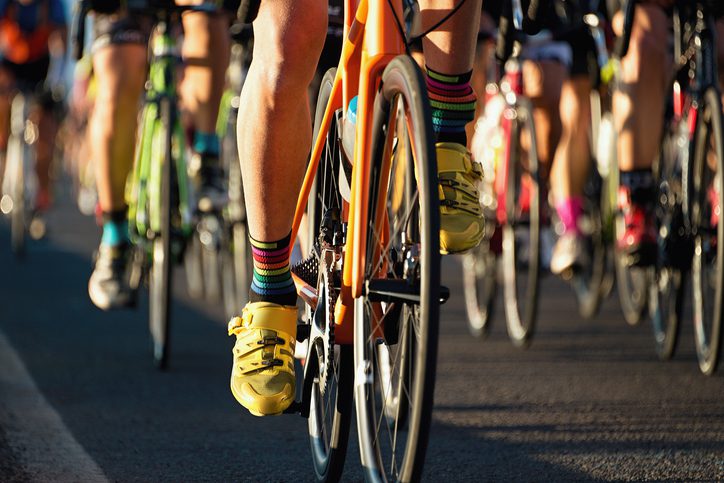 Emotions run high. What are we to do?

Save for limited exclusions such as air travel and shipping, transportation is provincially regulated in Canada. This means that laws applying to riding and driving on roads, or “highways” as they are called in legislation, vary by province or territory. All Canadian provinces except Saskatchewan and Ontario have legislated that cyclists are not permitted to ride side-by-side on roads, subject to limited exceptions. Even in those two provinces, cyclists must be mindful that many municipalities prohibit riding two-up by bylaw. Unsurprisingly, many drivers, and even police, argue that by riding side-by-side, cyclists are acting in an entitled way, causing delay and provocation. Those officers are unlikely to be swayed in the heat of the moment.

Such conflicts require a balancing of interests. Are you a cyclist who seeks to stand firm and to assert your rights when faced with potential conflict? Are you more comfortable prioritizing lowering the temperature of such an encounter, minimizing conflict in a potentially dangerous situation in order to get home to address any consequences, legal or otherwise, from a position of safety?
With so much variation between the various provinces and amongst municipalities, it is impossible to offer a one-size-fits-all solution to a common point of conflict between cyclists and drivers. That said, for clarity in advance, or to defend against a charge, cyclists and clubs would be wise to seek legal advice on the laws and their exceptions where they live and ride.

For example, even where riding two-up is prohibited, jurisdictions often provide exceptions for cyclists passing one another. As a result, many clubs and groups have adopted the practice of continuously rotating pacelines.

The ability of cyclists to ride side-by-side, whether for safety or because it makes riding more pleasant, can often be found in the exceptions to any prohibitions against it. Take the time to learn the law that applies to where you live and ride, and, if you can’t discern what is permitted, consult a lawyer who versed in highway traffic law, particularly those applying specifically to cyclists.

Ian Brisbin is an Ironman finisher and a personal injury lawyer from Hamilton. You can find Ian on Instagram, Twitter and Facebook @velolowca, or through velolaw.ca. This story originally appeared in the Sept. 2022 issue of Triathlon Magazine Canada.