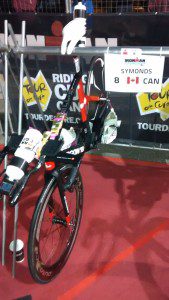 Forgetting to take in nutrition can be disastrous. When I plan my nutrition, I base it around what I need to consume before I reach the next aid station. Before the race I calculate roughly how long it will take me to reach each aid station. I research where the aid stations will be and determine how long it will take me to get there. This can be done by using your expected average pace or, if you want to be more exact, by finding a GPS file on Strava of the race course done in a time that is similar to your expect time. Bonus: If you have a super fan like my dad, they can use the same Strava files to figure out where and when you will be and plan their cheering route accordingly!

Write out your nutrition plan

This is an obvious tip but cannot be said enough times. Much like a goal, if you write down your nutrition plan you are more likely to stick to it and achieve it. I write down what I want to consume, when I want to consume it, and what I will do if disaster strikes and I drop a bottle or miss an aid station. Every race has different on course nutrition and aid station locations so it is important that you write out a new nutrition plan for every race.

Make everything on the bike one handed

All my race nutrition can be consumed with one hand. This allows me to keep at least one hand firmly on my handlebars at all times and stay focused on the road ahead. This is crucial not just for safety but also for speed and making sure you don’t drop anything. I achieve this is by using predominantly liquids and going old school and taping Powergels to my bike. Also, if I am supplementing with salt pills I stick them to my top tube with a piece of double sided tape. They look like a roll of ammo that Rambo would carry (a constant reminder of how epic your race is) and I probably ingest a bit of glue with each pill, but I guess that is the price for speed!

Use gels to know exact amounts

Anyone who has raced a triathlon knows that the amount of liquid in aid station cups can vary greatly. You never know exactly how much Coke or sports drink you are getting. I like to know exactly how many grams of carbohydrates I am taking in on the run and I find the best way to do this is by using gels. I know each time I take a Powergel I am getting 27g of carbs. Just make sure you wash them down with plenty of water (this is key)!

Liquid is your friend!

There are some stories out there that if you take in too much liquid, bad things can happen but I have never met anyone who has taken in too much liquid during a long distance race. Generally people don’t take in enough liquids. If you haven’t felt the need to pee by the half-way point on the bike, you haven’t had enough liquids so get on it! And if you need to pee, just let it flow…as my coach says, it will make you feel like a crazy animal which is sure to get you fired up! Or as my girlfriend says, it will just make you want to get to the finish line faster so you can have a shower sooner!

Run
Aid stations were roughly once every 2kms and I alternated between:
-1 Powerbar Strawberry Banana Gel + at least 2 cups of water
-At least one cup of water, but if I felt like more I grabbed more.
The total was 10 Gels.

Race Nutrition was almost exactly as I had planned. The only differences were that I had planned on full bottles of Endura on the bike, but they were handing out half bottles and on the run I also grab a few sips of Coke if I really felt like it at aid stations.