Since starting triathlon a decade ago, everyone from coaches to other triathletes promoted joining a masters swim group. No surprise: I didn’t do it.

A classic “adult-onset swimmer,” I had no experience with competitive swimming, I didn’t grow up near an ocean or lake, and I hadn’t swum the length of a pool since my final swim lesson when I was 14. When I started swimming again to train for a triathlon (well past the age of 40), I did what I remembered from those long-ago lessons: circling my arms, getting better at breathing and building endurance. I watched other swimmers and tried to imitate them. I searched YouTube videos for pointers. I bought a bunch of books that were helpful in improving my form.

Over the years, I worked my way from last-out-of-the-water at my first open-water swim event to solidly middle-of-the-pack at most triathlons. That’s where I’ve stayed ever since. I knew others that were in masters swim groups, but they were all faster than me, or had collegiate swim backgrounds: definitely not my crowd. So, every time a fellow athlete recommended their awesome masters swim group to me, I nodded politely and ignored them.

“I’m not fast enough.”
“I’m not a natural swimmer.”
“I didn’t swim in high school or college.”
“I don’t have a ‘swimmer’s’ body.”
“My legs sink.”
“I don’t need to know any other strokes.”
“Swimming is the shortest leg of a triathlon anyway.”

Now I’m past 50, and, after a cross-country move to be closer to my aging parents, I found myself suddenly alone in my training. Eager to meet other triathletes, I grudgingly started poking around for local masters groups. There was one close to a nearby military base that met at the ungodly hour of 5 am. But, desperate for training partners, I signed up.

On day one, I was prepared for movie-style locker-room hazing. I’d be left in the dust by the other swimmers. I’d be the oldest one there. I’d embarrass myself with my horrible form. The other swimmers would be watching me, slowly shaking their heads at my vast incompetence, at my lumpy body, at my non-existent swimmers-build.

And…I was fine. I didn’t drown. I met some nice people. I WAS the slowest, but not by that much. I wasn’t the oldest. And what’s more: I liked it. Learning new strokes and trying new workouts has reinvigorated the joy of swimming that I thought I’d lost.

It’s been a year since I joined the “Lancers” and I fully admit I was an idiot for not trying it sooner.
Masters has improved my triathlon performances

I haven’t gotten enormously faster, but I have gotten better. With the help of a masters coach and her endless drills, my form has improved immensely. My legs no longer sink in the water – something I thought was a terrible genetic flaw I would never overcome. I’ve learned to use my back muscles instead of just my arms, cutting down on mid-swim fatigue. I’m now much quicker at both the beginning and the end of my triathlon swims, and it takes me much less time to find my rhythm in the open water.

My swim times have improved a little, but the big difference is that I’m finishing the swim without being totally wrecked. I’m more strategic, I swim more smoothly, and no longer feel like I’m flailing out there.

Learning other strokes has improved my mental fitness

I’m not going to use breaststroke in a triathlon but working on other strokes has helped me be more aware of my body and of my mental focus. I no longer “phone in” 3,000-m workouts of nothing but easy freestyle. Cross-training with other strokes has sharpened my focus on my key freestyle intervals and has helped me maintain my form over longer sets. My masters coach recently told me that I now look like a “real” swimmer in the water. 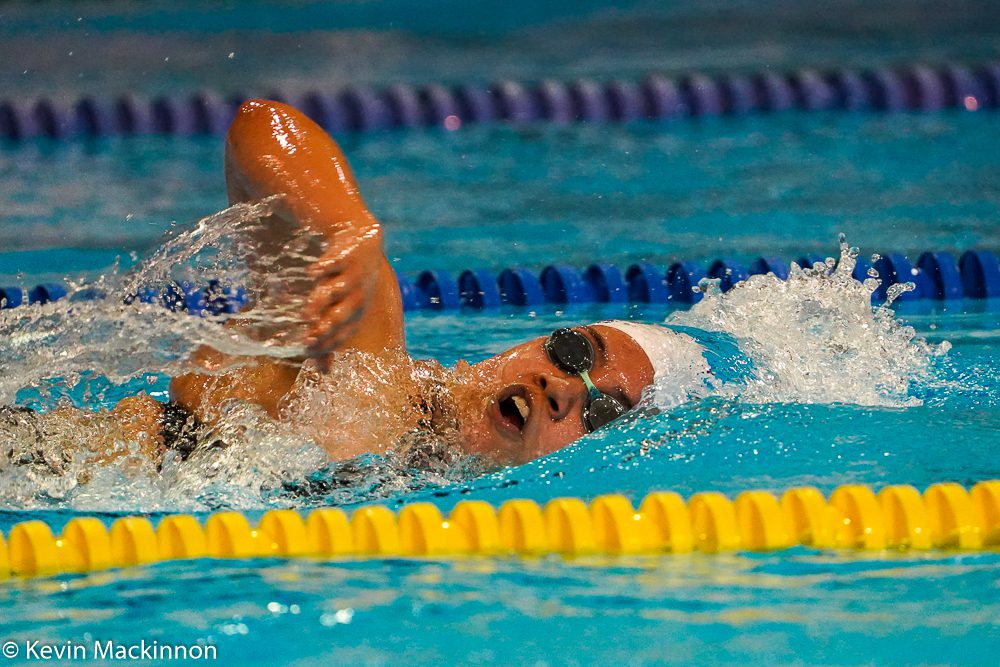 Swimming with better swimmers has made me better

Running with more skilled runners improves my running and cycling with better cyclists has improved my cycling. So why was I in so much denial that swimming with better swimmers would improve my swimming?

Just as I do with running and cycling, I still sometimes beat myself up that I’m not faster, but I’ve realized everybody beats themselves up in similar ways. But now, instead of being intimidated by the better swimmers at masters, I use them as a learning tool. And, in return, those in my group that are solely pool swimmers are impressed by my epic open-water swims.

I hope I can convince other triathletes to give masters swimming a try since I’m now kicking myself for not trying it 10 years ago.

I’d always assumed that ‘masters’ swimmers had ‘mastered’ all four of the main swimming strokes. Turns out, ‘masters’ simply means ‘adult,’ and, in the world of swimming, that means anyone over 18.

Start by checking the Masters Swimming Canada website (MastersSwimmingCanada.ca) for registered groups in your area, but don’t stop there. I found that a lot of masters swim groups really aren’t formal groups at all; many started as an interested group of regular swimmers at a particular facility that decided to swim the same workouts and find a coach. As such, these groups didn’t have websites or Facebook pages. I found them by calling pools and asking if they had any masters groups.

Once you find groups, talk to the group’s coach about the workouts, the other members, and inquire as to the general “vibe” of the group. Turns out, the group I joined had two sessions on weekdays: a 5 am session and a 7 am session. I gelled more with the 7 am folks, which turned out to be a little less serious, with more people in my age range.

This story originally appeared in the May, 2022 issue of Triathlon Magazine Canada.