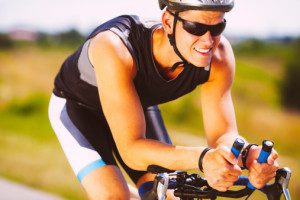 Athletes can’t always have their best performance. That’s why the training year is periodized (intensity and volume of training are varied). However, figuring out just how many races you should  do depends on your goals and the distance that you will be racing. An athlete racing only Sprint triathlons can race a lot more than one competing in Ironman  for example. Nonetheless, there are some general principles to keep in mind when racing any distance.

As a general guideline, it’s best to pick only one top priority goal race per season and focus all your training and racing to accomplishing that goal. This is your “A” race. In Canada, it’s best to choose an “A” race towards to end of the outdoor season, so August or September are fine. Choosing an “A” race later in the season allows us to benefit from training outside all summer and try a few preparation races.

For preparation races, I like to distinguish between “B” races and “C” races. In “C” races, we’re really just trying to build experience, get use to transitions and often give a good effort, but top performance is not our priority.  In “B” races, we are still using them as preparation, but our performance in these races is important for us. Now in a year, it’s okay to race several “C” races, but it’s important to keep “A” and “B” races to a minimum if you want to perform well.

Races need to be spread out as well. You need some recovery after races and should be aware that racing every weekend is not the way to achieve your best performance. Recovery is personal and will vary between individuals but a general guide to recovery is the following.  A sprint triathlon takes about a week while an Olympic triathlon can take  up to two. The half and full distances take a minimum of two weeks to a month respectively.

An ideal race schedule would look  something like this:

To summarize, you can’t have your best performance every race, so choose a top priority “A” race late in the season that you can train towards. Along the way, build some experience with “C” races to test your fitness and gain experience and some “B” races to test how you can perform.