Any triathlete knows how boring road running can get. Even if your go-to routes follow picturesque and Instagram-worthy stretches of road, you’ll eventually tire of doing the same out-and-backs, or loops, over and over again. Luckily, there’s an easy way to break out of that monotony: jump to the trails. We spoke with two-time Canadian Olympic marathoner Reid Coolsaet, who recently transitioned from the roads to a competitive trail racing. Hot off his 100-mile debut at the Western States 100 in California, where he placed 17th in a time of 19:27:03, Coolsaet has some great tips for any runners looking to follow his footsteps and add some more trail running to their training schedules.

Trail running is for everyone

We’re not sure who needs to hear this, but you don’t have to be a trail runner to run on trails. Coolsaet trained off-road long before he made the jump from marathons up to ultras. “Eighty per cent of my running was on trails when I was a road runner,” he says. Trail running offers you the chance to gain far more elevation than you can on the road, and you don’t have to seek out technically difficult routes to find the hills.

“Once you’re training for real trail races, you have to learn how to run downhill fast and also how to navigate more technical sections without slowing down a ton,” he says. The main thing he’s been working on lately is looking ahead when he’s running, which may sound simple enough, but can be tough if you’re afraid to trip on a root or rock.

“If you’re looking right in front of you, you’re reacting at the last minute, so you can’t go that fast,” he says. “That was all fine when I used the trails as a fun place to run, but now I’m actually trying to race, so that’s when it becomes challenging.” Whether you choose to race or not, trail running is a great training option for all triathletes, and it’s worth giving a try this summer and fall if you haven’t already.

What equipment to bring

Coolsaet says that if you’re planning to run technically challenging routes, you should consider getting a pair of trail-specific shoes. These have more protection and better grip, which will help you stay on your feet. While trail shoes are not necessarily a must-have (depending on the level of trail you plan to run), something Coolsaet says he wishes he had purchased sooner (even for his light trail running days when he was still training for road races) is a hydration vest.

“They don’t feel good when you’re running really fast, but there have been plenty of hot summer days when I could’ve benefited from a trail vest,” he says. While running on the road, you’re usually able to stop for water at a Tim’s or McDonald’s, but there are no fast-food joints in the forest, so a hydration vest is a valuable piece of equipment for anyone looking to get into the trail scene.

Another key piece of equipment for Coolsaet is his GPS watch. This is of course great for tracking his runs and workout metrics, but it plays an important role for him when he’s exploring new trails. “If I go somewhere new, I’ll look it up on Strava and download the GPX file to put it on my watch,” he says. “If I can’t do that, I’ll have the navigation on my watch turned on. If I’m halfway into my run and I see on my watch that I’m still running away from where I started, I’ll turn around so I don’t go too deep or get lost.” 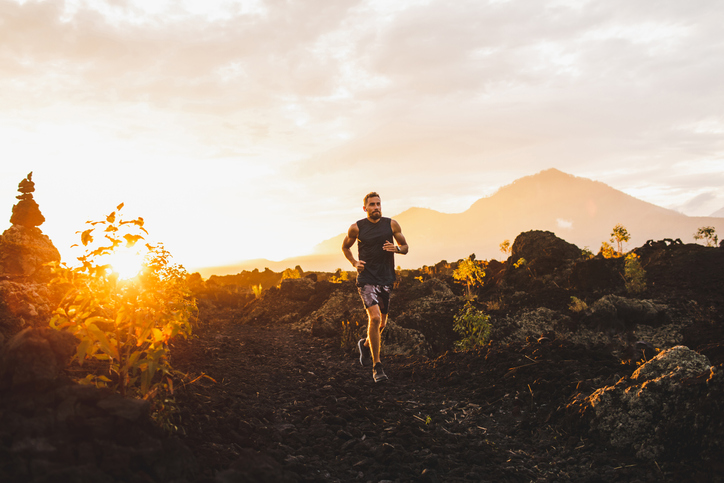 Strength work for the trails

Strength training should be a part of every triathlete’s schedule, and you’d be right if you guessed that it plays an important role in trail running, too. “The demands of running downhill, especially running downhill fast, are just more intense,” Coolsaet says. “I’ve added more squats, hip strength exercises like flutter kicks, and cycling to my strength training.”

That’s right, Coolsaet says cycling (especially cycling uphill) can help make you a stronger trail runner. That’s great news for triathletes, as you can count your bike rides as cross training for trail running, all while remaining a core workout for the second leg of your races.

Related: What’s the perfect running shoe for a triathlete

Use the trails for fun

While Coolsaet is new to the trail racing scene, he did compete in a couple of trail events in his marathon days. “I had a lot of fun running those races,” he says. “They gave me the chance to work in a harder effort than I’d get just training, but they were fun, too.”

This is probably the most important thing to remember when you hit the trails: you’re doing this (trail running and triathlons in general) because it’s fun. With so much intense training every week, it can sometimes be easy to forget this simple fact, but trail running is a good way to bring you back to that mindset and to help you find that fun once again.

This story originally appeared in the Sept. 2022 issue of Triathlon Magazine Canada.