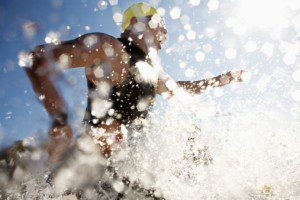 Many athletes have come to believe that if you’re not training with power, then you’re not training effectively. Measuring power output has become increasingly important for understanding training and racing efforts, but even more importantly, for gauging potential capability. Could the same be true for your genetic make up? Two Canadian companies think so: Nutrigenomix and Athletigen.

Nutrigenomix is a University of Toronto start-up biotechnology company dedicated to empowering healthcare professionals and their clients with comprehensive, reliable, genomic information with the ultimate goal of improving health through personalized nutrition. The Nutrigenomix® test kit (one kit is based on seven nutrients and the other is a gluten sensitivity test) enables dietitians and nutritionists to counsel their clients according to their unique genetic profile. Based on a simple saliva sample they’re able to determine caffeine metabolism and responses to various nutrients including gluten. Many athletes have used the Nutrigenomix test with a sport nutritionist to improve their overall diet based on their metabolic needs. The company is currently collaborating with researchers at the University of Toronto to study athletes and identify the optimal level of caffeine for those with variations in genes that affect caffeine metabolism. The company hopes to implement this “caffeine-performance-panel” into a test kit for the fitness/athletic population in 2016.

Athletigen is designed to help individual athletes. The company’s motto states, “Know your body. Own your sport.” Their services include a coaching platform, performance tracking and comparative analytics. All of this functionality is meant to present the concept of “genetic relativity” to the athlete. Athletigen uses scientific observations to help coaches and athletes leverage the environment given their innate predispositions as they relate to sports genetics or, to put it more simply, to nurture their individual nature.

The science and technology for understanding how our bodies work was significantly accelerated with the sequencing of the human genome and with the development of cheaper technologies to analyze DNA. The initial draft sequencing of human genome cost $15 billion dollars and took 10 years. Today the same can be done in less than a day for under $1,000. On the back of this revolution, a number of companies have emerged to provide sport specific testing. Should you use them? The answer depends on what you would do with that information.

The results can be either empowering or potentially disempowering. Certainly examples of athletic greatness defying bodily limitations abound, raising the question of the value of such information in the first place. On the other hand, the information gleaned from sport specific testing could steer athletes to the optimal sport for their predispositions, saving time and potential frustration.

Let’s go back to the power meter comparison. Power meters are getting cheaper and more accurate, but they’re not yet perfect. The same is true for genetics and genetic tests. With a power meter, it’s fairly easy to understand what a difference of +/- 5 watts means. By comparison, such discrepancy for a genetic test is much harder to understand. First, there is the science behind the test. There are millions of parameters involved in answering the most basic questions with respect to the body. DNA is not the only information dictating outcome. There are many physiological and epigenetic (things that affect DNA) that come into play. Furthermore, the regulation in genetic testing is still unclear. Currently the technology is moving at a faster pace than the institutions that oversee it. There is no doubt that the technology has potential, but to what extent is as yet unknown.

If you want to be an early adopter, getting a sports specific genetic test could be interesting and useful. Like any other technology that can benefit your training, your mind is as important as your body when you want to unlock your potential.