As triathletes, we call what we do in the water and on the land training – not exercising. There’s a good reason for that. Exercise is an end to itself, done to feel good, burn calories and for general health benefits.

Although training has the same immediate effects as exercising, it also has a long-range purpose, a means towards a desired result. It is sort of like the difference between reading and studying. The main purpose of training is to improve.

In addition to success, a less desirable by-product of training is expectation and, unfortunately, expectation’s nasty by-product is often disappointment. Of course, how you internalize that disappointment, can either produce motivation or discouragement.

But there are those times when you train, and you meet or exceed expectations. Your hard work paid off, or seemed to, and you set a personal best. “How did that just happen?” you may ask yourself. Some athletes go as far as reverse-engineering the exact ingredients of their success, so they can repeat it the next time they race.

It doesn’t always work, as two-time Ironman World Champion Scott Tinley can attest. After winning Ironman New Zealand one year, he quickly wrote down all the things he did leading up to that victory, in an attempt to bottle the formula. The secret sauce, as Tinley found out, had a “best before date” of one minute after the finish line.

But, just because it didn’t work for Tinley doesn’t mean there aren’t some key components that can increase your chances of setting a personal best the next time you hit the pool, track or Watopia.

Related: Test your way to a swim PB next season

Although it is easy defining what a PB isn’t, nailing down what a PB is proves to be a lot more difficult. That first word in PB is personal – and personal can be very, very, subjective. Primarily, the milestone that you create needs to be meaningful to you. Multiple-Ironman winner Jordan Rapp is a believer that a personal best can’t be reduced to numbers on a spreadsheet. He recalls his 2011 Leadman win near Las Vegas. He was the only male pro to finish and won the race over second place finisher Angela Naeth by over an hour. “It was a 223K course with crazy winds, zero shade, and temperatures of 42 C. That was the race that made me feel, ‘I’m back’ after my accident in 2010.”

Whether you are an established pro or an enthusiastic age grouper, a huge part of a personal best is the meaning you attribute to the performance.

In addition to the special meaning you attribute to the performance, you also need to understand the distinction between an “absolute” versus a “conditional” PB. An absolute PB represents your fastest time over a given distance. A conditional PB means your best performance after factoring in the environmental conditions (weather, geography) and your personal conditions when setting that PB. For example, finishing a half-distance race in under six hours may have not been a big deal to you when you were in your early 20s, but the same accomplishment when balancing a family, new job and household responsibilities in your 30s, or later, may be a big deal. With those caveats in mind, let’s delve into the ways that you can increase your chances of claiming another PB. 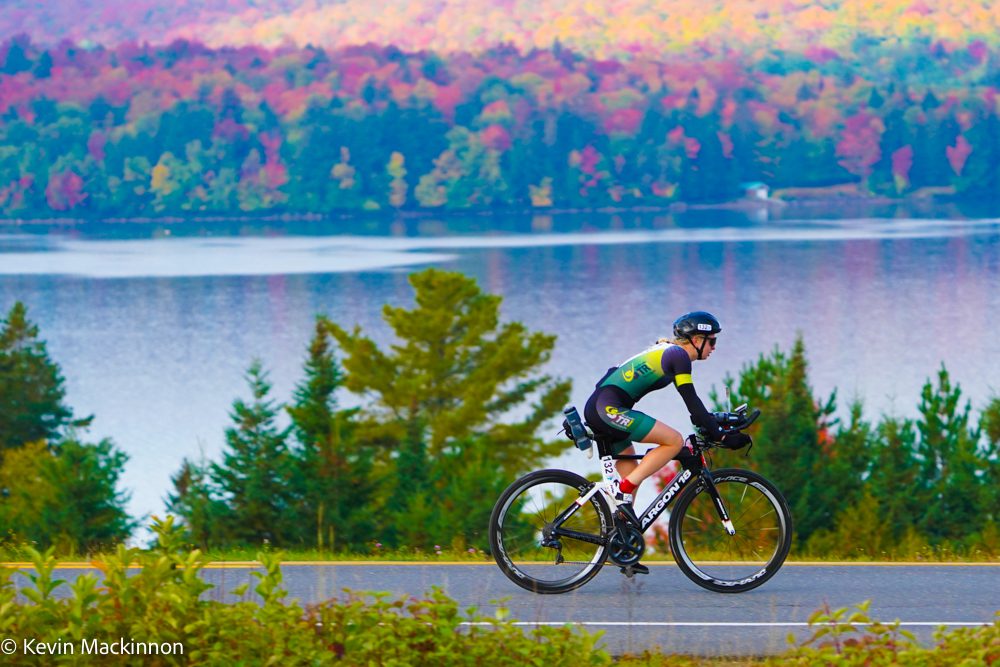 Whether you are a golfer, yachtsman or triathlete, you can’t deny the significant role that weather conditions play in achieving a personal best. The difference between a headwind or tailwind in a race can yield massive differences in your splits. The same goes for temperature. There’s a reason that seven people went under eight hours at Ironman Copenhagen this past August, and why only three people have ever done it in Kona. And if you are a typical Canadian triathlete, the opportunities to become accustomed to performing your best in the heat can be very limited. If you are out to set a PB, choosing the day to make your attempt can be the difference between success and failure.

Although Mother Nature holds many of the cards for setting a personal best, there are some factors that you can control to your advantage. Your aces in the hole are rest and fuelling. To maximize your chances of attaining that personal best, sacrifices must be made and, for us triathletes, one of them is to work out less. That of course is what a taper is all about, letting the body recover fully before making the big attempt. Lifesport Coach Lance Watson says that tapers are not a one-size-fits-all process – an athlete’s unique physiology and event their tapering for need to be considered.

When it comes to fuelling, books have been written and empires have been built on what should go in your mouth to taste gold. Maybe multiple-Ironman Canada winner Lisa Bentley said it best when she said it just comes down to salt, sugar and water, and finding the right balance for you. And of course, there is caffeine.

Whether you hear it from your coach, a person on an internet forum or a training buddy, chances are they are all part of the choir that follows the concept that “consistency over time produces results.” But, when your consistent training plan has you stranded on a plateau of mediocrity, it’s time to walk to the edge and take a leap of faith. Does that mean training more? Does that mean training less?

Making changes and taking calculated risks to reach that next level is one of the things that makes participating in multisport racing so challenging and engaging. One of the risks that Ironman and Challenge champion Jeff Symonds took was leaving his training paradise of Penticton. He went to train in Bendigo, Australia before Ironman Western Australia in 2015. The new training environment helped give him the edge needed to win his first Ironman. The following year he returned to Bendigo hoping to replicate his success. It didn’t work. After arriving in Australia, he got injured and also had mechanical issues with his bike. His final preparation for the race went poorly and his race even worse and he had a rare DNF. At the time, Symonds felt like the experience was a disaster, but with some hindsight, realizes that having things backfire is just part of the process. As he says, “I would rather have struck out a lot of times and hit a few home runs, rather than always hit singles.”

Ironman Canada champion Jasper Blake remembers a lesson he learned from a three-time Ironman World Champion, back in 2000. “I was obsessed with my nutrition and was set up to carry most of it on the bike. I had gels taped to it and in a last-minute job, I taped a yogourt container between the TT bars for extra pieces of energy bar. I racked my bike the day before the race next to Peter Reid. The contrast in our setups was sobering. My bike was set up for an epic adventure. Reid’s bike was set up to win. It was the cleanest thing I had ever seen and when Reid was on it, the bike looked like an extension of him. His bike was like an F1 race car.”

After the race, Blake examined his bike setup and went to a wind tunnel. The yogourt container disappeared and he appeared on the top of the podium in 2006. Like most things in life, it’s the little things added together, that can make a big difference in the end.

While using the best gear you can afford can produce a “no-excuses” mentality that may contribute to a personal best, there are other psychological strategies you can use that won’t cost you a penny. Mentally rehearsing the race can help. Playing the image of you successfully achieving your goal during the days before the event can help promote feelings of confidence and familiarity, contributing to a significant mental edge.

Positive self-talk before a major race can help too, according to Canadian Olympian Joanna Brown. Prior to the recent Tokyo Olympics she was suffering from a kidney infection. She was also stressed out from the qualifying process needed to make the team, as well as the behind-the-scenes Triathlon Canada drama. When she received confirmation of her team status, she began worrying about whether her training was good enough. She had fears about getting to the start line in Tokyo and feeling lethargic.

To allay her fears, instead of focusing on the negatives and what-ifs, Brown drew upon all her successes. She reflected on her previous performances and her successful preparation over the past years. She said to herself, “you did the work, now get to the start line and give yourself a chance.” That was just the inner pep talk she needed, and Brown had one of her best-ever swims that day. Her advice is to “trust in your body come race day – or any time that you ask something special of it, give it a chance, and there are some incredible things that it can do.”

Kevin Heinze is a coach with the Abbotsford Triathlon Club and the host of the endurance sports podcast, Fitspeek.