In July 2017, Joy Booker was at the start line of her first triathlon. It was an Olympic distance race in New York, and the swim portion was held in the Hudson River.

“It was like the showdown at the OK Corral: get your gun ready, and start firing,” she says.

When the gun went, Booker jumped from the top of the barge into the murky Hudson together with nine other athletes. But fifty yards into the swim, she panicked. “I flipped over to my back, and I could see the sun, the buildings on the side of the river, and I never had to consider what was underneath me, or how deep it was,” she says.

Booker tried to flip over again and continuing swimming freestyle, but she couldn’t. The fear and anxiety reemerged. The safety kayaks and marshalls checked in with her; she calmed down, started to swim again, then panicked one more time.

Booker was – and still is – affected by the fear of open water (a condition called thalassophobia) and fear of water (aquaphobia). At the beginning of that year, she had decided she wanted to learn how to swim and took lessons. One day, while learning the basics at the shallow end of her local pool, she saw some women swimming in wetsuits.

“They looked like superheroes. I wanted to do what they were doing,” she says.

She found out about triathlons, signed up for a triathlon club, and they mentioned they had a race in July. “I didn’t have a bike and never ran a mile, but I just followed their guidance and programming,” she says. “My fear about swimming became almost second nature to my interest in learning.”

Her fear didn’t disappear through the process, though. It was something she learned to live with and control – at least until she jumped in the Hudson on race day.

“The things that got me comfortable enough to do it were the proper training, understanding that this is a race environment, the safety measures that are out there, the neoprene that is wrapped around my entire body, and more than anything else, the confidence in yourself,” she says.

On race day, all the effort she had put in seemed to be thrown out the window. But, through self-talk and rationalization, she managed to bounce back. She managed to finish the swim segment and complete the race.

Somebody who has seen many triathletes and swimmers struggling with open water is Gerry Rodrigues, head coach and founder of Los Angeles’ Tower 26 coaching and the T26 podcast (where he delves into the topic). He says that the main challenges athletes face in an open water environment are the “lack of specific open water experience and skills needed for confidence and a successful swim.”

Rodrigues has a system called the 3 F’s. “You move from fear to familiarity through frequency,” he explains. “Frequency is comprised of multiple, minimum of 10 pool training sessions where open water skills are developed: sighting or navigation, pack swimming, drafting, change of speed, race take-out efforts.”

Of course, there are differences between pool and open water swimming. “Pool technique is more quiet and elegant as the training or racing environment is static and carefully managed. Water temps are regulated, pools have lane lines, water is generally static; conditions are easy,” he says. On the other hand, open water swimming can be very dynamic and requires a different set of technical tools. “Think of this as an arsenal of skills that go beyond what’s needed for pool swimming,” he says. “The open water swimmer or triathlete needs both, thus able to deploy the appropriate skill based on event day conditions.”

That is also why Rodrigues breaks the year-long season into several phases, with one phase (around six weeks long) dedicated to open water skill-building. “It coincides with the beginning of our one per week open-water beach training sessions,” he says. “During this six-week phase, and the entire next phase (Race Phase), open water skills are practiced at every workout.”

If you think that open water swimming is something that comes easy for professionals and elite age groupers, think twice. While they might not lack technique or fitness, they may still face other hurdles, like logistics and mind games.

Sara Pérez Sala, the fastest female swimmer at Challenge Miami in March (and third overall), says that to get to open-water lakes around Madrid “is very difficult. We do not have a beach, and swimming in the lakes is prohibited. There is one, 45 minutes by car from where I live that you can swim, but there are boats, and I don’t like it. I only do open water in summer because in winter it is very cold and it is impossible. This year was the time I have done more open water, and I went two days a week.”

Ben Kanute, the first man out of the water at the same race, acknowledges that even if you’re a good swimmer and you’re swimming alone, your mind can play games and make you feel uncomfortable in the open waters. He says he swims a lot in California, where there can be sharks. To stay calm he swims close to shore and focuses on his technique.

Another good way to overcome the open water fear, he says, is “finding a group that has a wide variety of swimmers, or people that you can swim with, especially if you can attach yourself to someone who’s a bit more experienced in open water to help you learn. A big confidence boost is when you have more people around you.”

And don’t forget to check in with locals. “I try to speak with lifeguards and surfers when I swim at a beach for the first time,” he says. “Even though I swam in a lot of bodies of water, nobody knows that body like a local or someone who has been there a lot of times.”

When Pérez Sala can swim in open water, she tries to mix intervals at race-speed and other sessions at a steady pace and stress the importance of safety. A former Spanish Olympic swimmer, she suggests having patience when approaching open water swimming in training. “The best thing is to go somewhere that inspires confidence and be accompanied by someone else for greater security, as well as carry some support material such as a buoy,” she says.

During the season, even Kanute doesn’t frequently train in open water. When he does, though, he prefers doing it with other athletes and simulate a race scenario. They tend to place buoys in the water and build a small circle. They then mimic the race environment by repeating the loop at race-pace or threshold.

“You get that simulation of going harder in open water, having to sight where the buoys are at, and also swimming with other people in your space, and getting used to the wetsuit,” he says.

If you can’t use buoys, he suggests to “pick your own route, but pick something to sight of to practice swimming in that straight line: a tree, a building, anything just to help practice that. You can then do cycles of 30 strokes hard and 30 strokes easy for 5 to 10 sets of that. Then take a break and cycle through that a few times.” 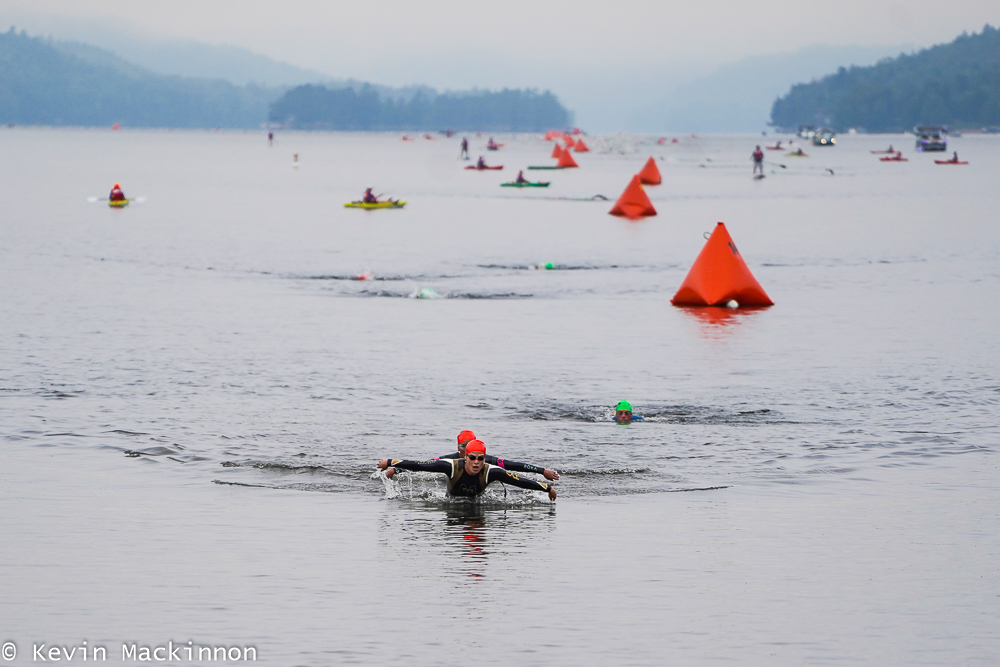 Pérez Sala and Kanute typically opt for an aggressive approach to the swim. Avoiding chaos and having a good position at the first buoy is crucial to feel calm in the water and start the race well. “The first 300 meters are very important,” Pérez Sala says. “I do not usually follow any strategy. As I get to the buoy, I decide to get behind someone or get the first attempt to maintain that position.”

Kanute echoes her point of view. “Usually, my strategy in the swim is to get out quickly,” he says. “I grew up a swimmer, and having that clear space helps me to get through the swim well.”

Once he finds that space, Kanute focuses on his rhythm and race tactics – and adapts according to the conditions. “I make sure my line is straight and that I check where I’m going,” he says. For example, in Miami, athletes faced a headwind for a good portion of the swim leg, making the water choppier and the buoys less visible. In these conditions, Kanute says its more important to “sight a little less frequently, but make those sightings count a little bit more.”Their tactics may come from their swimming background, but they agree that both advanced and beginners can avoid chaos in different ways.

“If you’re a new swimmer and a bit nervous about swimming with other people, there’s no problem to start toward the middle of the back or outside to give yourself space,” says Kanute. “If you’re one of the fastest it is a great idea to start in the front and get out quickly and have your own space too.”

If you’re doing all the above, but you still struggle with open water swimming, don’t despair. John Tan, a multiple Ironman finisher with open water phobia, has been using Cognitive Behaviour Therapy (CBT) to overcome his fear. The technique focuses on challenging and changing cognitive behaviors by developing strategies to solve current problems.

“I kept trying to conquer my fear by entering races, but it was not working,” says Tan. “In my first triathlon in 2017, I was confident and felt ready to conquer the swim and set myself up for a nice PR. Unfortunately, I had panic attacks during the swim and lost about 11 minutes just treading water.” After that incident, he realized he needed help. “One of my friends is a psychiatrist, and he recommended a cognitive behavioral therapist for me to see,” he says.

As the two individual examples have shown, and the fact that even professionals face challenges with it, open water swimming is a practice that needs constant devotion. But the hard work will eventually pay off, in one way or another.

Nick Busca is a freelance journalist, coach and triathlete based in Great Britain