A year ago, Richard Hayden opened his open water swim season on April 25th. The pool closure on Salt Spring Island, BC, in March had driven him outside earlier than normal.  What he didn’t know, back then, was that he would stay outside for a full year.

“It wasn’t something I planned, it just happened,” says Hayden, who finished the Norseman Extreme in 2017. “Although the pool on Salt Spring Island re-opened in June, it was very hard to book a lane. After the summer we just kept swimming outside as long as we could.”

Personally, I never really liked cold water. I did my first open water swim of the season last year at the beginning of May, which was very early for me. But after having experienced the hassle of booking a lane at the pool, it just seemed easier to swim in open water. So, Richard and I stayed outside, without a wetsuit, until the end of September.

In October the water temperature cooled off fast. Richard, who swam in a fjord in Norway and a freezing cold lake in Iceland during the Iceland Xtreme Triathlon, started not only to wear his wetsuit, but also his neoprene cap, socks and gloves.

Soon after, I was given a pair of socks, gloves and a cap as an early birthday present. Which helped, but with a water temperature of 11.3 degrees Celsius, it was still cold. The hardest part was the first 200 m – brain freeze! I started with breaststroke to get my breathing under control, tried a bit of front crawl, changed to backstroke, then was finally able to keep my head in the water. 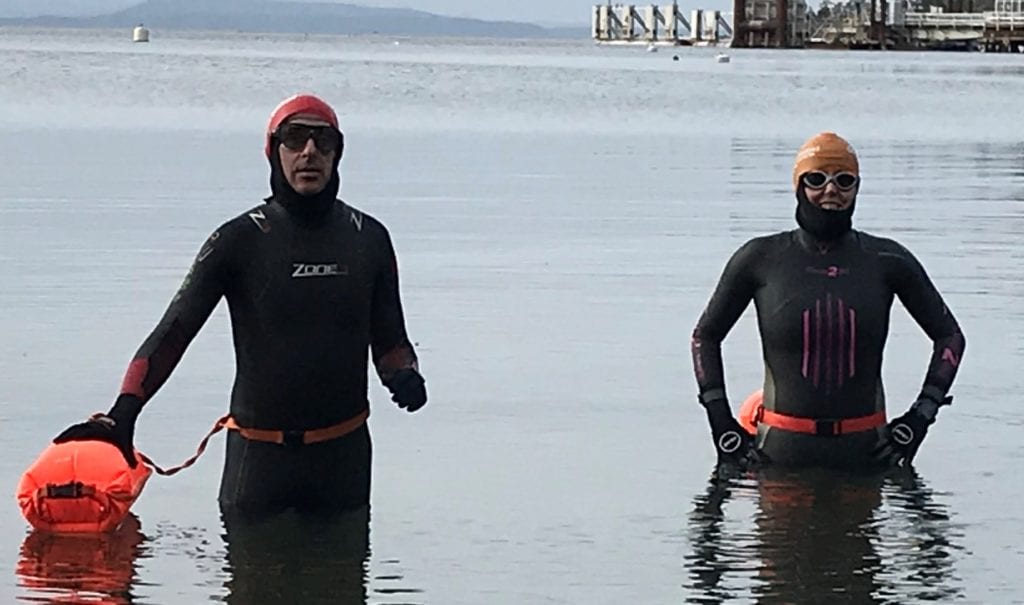 Richard felt the same: “The first hundred meters are the worst, but when my face starts to get numb the cold doesn’t bother me anymore.”

When our lake got too cold, we changed to a bigger, slightly warmer lake and bought a pair of extra socks and a dive hoodie. By that time, it was November and the water had cooled off to 6.7 degrees.

It was cold. It was uncomfortable – especially getting changed afterwards. One day I had trouble turning the key to start my car because my hands were so cold. It was crazy, or at least that was how some people reacted to our cold water adventures, but we always felt amazing afterwards.

I thought of quitting, but saw triathlon friends in the Netherlands still swimming in canals and lakes. It became my goal to get through December. And call it quits after.

Mid-December I had the chance to swim with the Salt Spring Seals, a group of women who swim in the ocean year-round. That gave a new dimension to outdoor swimming: the waves, the current, the wildlife. Plus, it was warmer than the lake. The ocean here on the west coast is always cold, but never colder than 6 degrees.  At 9 degrees it felt so much better than the lake.

So off we went late December, into the ocean. I accidentally picked a windy day, with a lot of waves, for our first swim. We had to cut it short and I thought, this is it. Richard, who is a less experienced swimmer than I am, wasn’t comfortable in the choppy water, so I didn’t think he would ever want to try that again. But, to my surprise, he emailed me a few days later. He wanted to give our ocean swimming a second chance. On a calmer day.

Long story short, we kept swimming in the ocean – carefully looking at weather forecasts and tide tables – until March. We didn’t miss a week outdoors, always swimming between 1,500 and 2,000 m. Even after a snowstorm. It was too late to quit, we’d come so far. 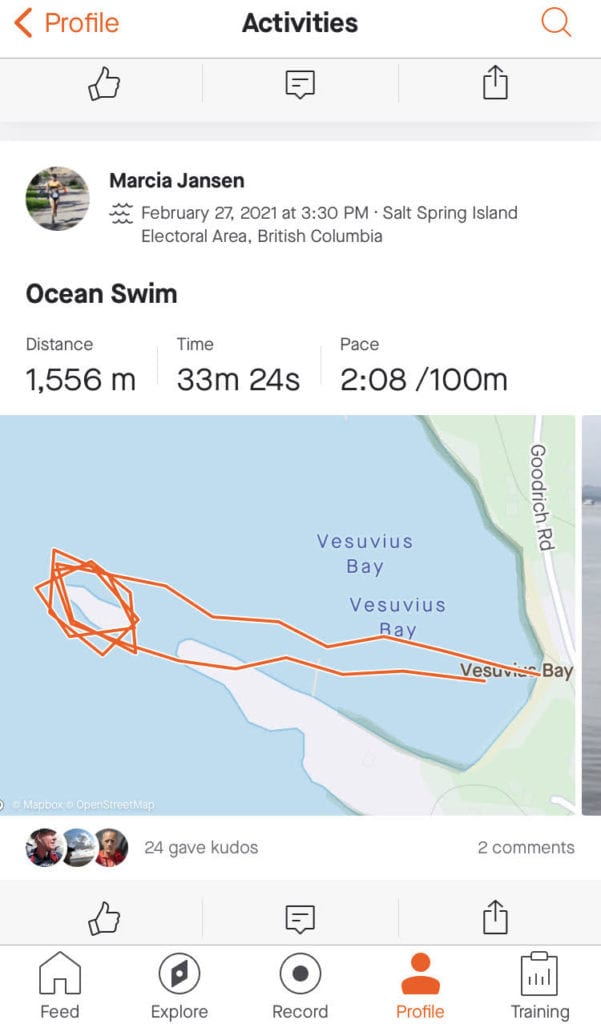 And now it is the end of April, and we are swimming in the lake again. After three warm days, the water has already warmed up to a balmy 15 degrees. It felt so warm. Your perception of cold changes when you get used to cold water.

Looking back, the big question is: why did I keep swimming?

I guess it gave me some kind of purpose and goal, now that all/most races are cancelled and a lot of things are on hold. It was something I looked forward to every week, but dreaded at the same time.

I also started to read about the health benefits of being in cold water: it can boost your immune system, it stimulates your metabolism, it is a natural anti-inflammatory, an antidote for depression, the list goes on.

Or did we do it for that feeling afterwards? The feeling you can do anything once you’re out of the water and warmed up again. It’s probably a combination of all those things.

The next question is: are we doing it again when everything is back to normal? When pools are accessible and we have races to prepare for? I am not sure yet. Richard thinks we do. We’ll see.

Want to try all-year-round outdoor swimming? Here are some tips and tricks.