After sending one of our writers out to participate and share what the Red Bull 400 is all about, we sadly had to abandon the coverage when nearby forest fires to the south caused the event to be cancelled. Throughout the year talk stirred and there was some heated conversations in the office about which magazines athletes could take the victory in 2018 (Running, Cycling & Triathlon). The Running and Cycling Magazine wanted to take on the best, us, the Triathlon Magazine. So, we at Gripped Publishing decided to put our money where our mouth was and put our sports to the test.

Gripped Publishing recently did a call out to Canada’s top endurance sport athletes in specialties Running, Cycling and Triathlon for a unique challenge. The goal of the contest it to pitch its three magazines; Canadian Running, Canadian Cycling and Triathlon Canada against each other to determine who’s the top in endurance sports. The Red Bull 400 is our middle battle ground between cycling, triathlon and running. While a runner may have an advantage in terms of time spent on their feet, a cyclist and triathlete are arguably more accustomed to steep inclines and hill climbing. None of three athletes are perfectly prepared for a race like the Red Bull 400, which makes it the perfect opportunity to test pure strength, grit and tenacity. 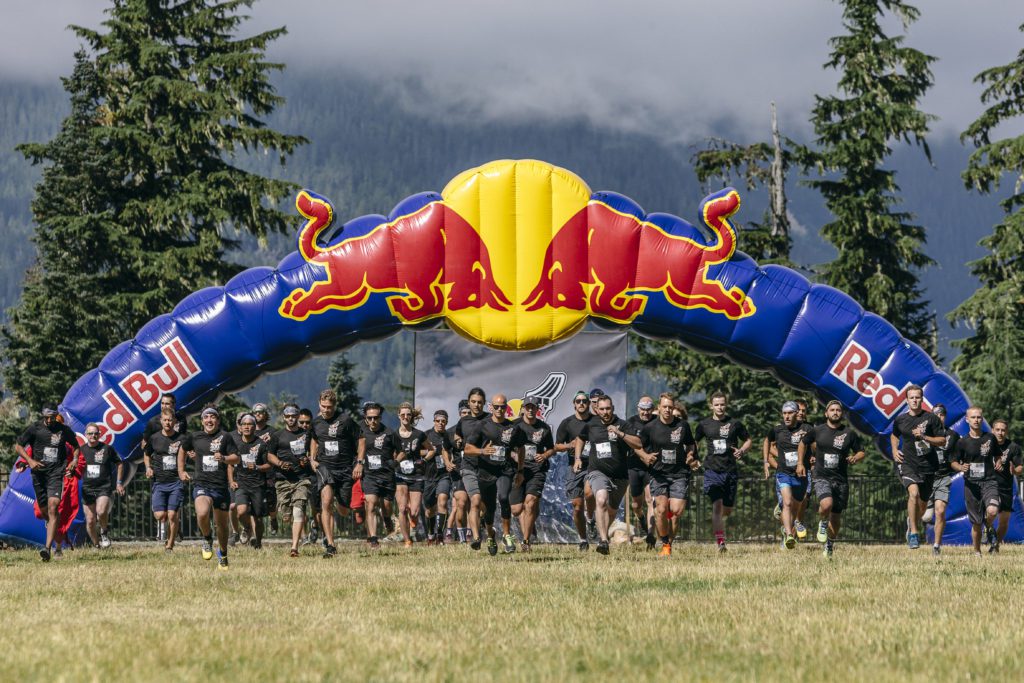 Don’t let the short distance fool you, the Red Bull 400 is a test of full-body strength. For context, the world record for the flat 400m is 43.03, and the world record for the Red Bull 400 is 3:48. That’s over three minutes longer to cover the same distance with an average record pace of 9:30 per km. Competitors will be pushing their lactic threshold to absolute max using their feet, legs and hands to race up this steep 400m.

The defending men’s and women’s champions are IAAF World Cross-Country team member Kieran Lumb, and triathlete Rachel McBride, one of Canada’s most decorated athletes in the sport.

Favourite Pre-Race Meal? The morning of an Ironman I go with a strange assortment of cantaloupe, banana, potato and protein powder (usually not mixed together!) at 3:30 am. Doesn’t sound appetizing but it’s pretty tasty and the perfect fuel balance for a long day of going hard!

Most Memorable triathlon moment? Collapsing at the finish line of the Wildflower triathlon in California after leading this epic race until 2 miles to go.

How did you get involved in triathlons?

Growing up our family was pretty active, and my parents were recreational runners. Some of my earliest memories are of them coming back all sweaty and red-faced from training runs. I remember running Fun Runs with my dad, where the post-race treat was a banana split.

I got into triathlon through running. At the age of 25, I needed to make a change. I had given up a budding music career in Toronto to focus on what I thought was being an “adult.” I felt pretty uninteresting and especially out of shape. I started running in January 2004 and nine months later completed the Berlin Marathon in 3:32 – qualifying for the Boston Marathon.

After finishing my master’s degree, I moved to Vancouver where the training temperatures were a bit more reasonable, and at age 28 did my first local sprint distance triathlon. I remember coming out of T1 and starting out on my bike with a huge grin on my face thinking “I’m really doing it!” I nearly won that race, placing second. From there on out, triathlon completely took over my life.

What does a typical week of training look like for you?

In a day, I typically have 2-3 workouts. For six days a week that adds up to roughly an average of 20-25 hours per week. About half of that is cycling and then the rest divided into swimming, running and strength work. Longer endurance sessions are on the weekend and then workouts with intensity pretty much every day during the week. Monday’s – those are my recovery days, with usually just a swim.

I understand you competed at the Red Bull 400 in Whistler the two years ago (last year cancelled), winning the women’s pro field. Can you share with us a bit about that experience?

Red Bull put on such an incredible event there two years ago.

Two years ago, I was so nervous for my first heat. I shot off like a rocket trying to get a good sprint to the bottom of the climb. When I realized I had quite a big lead on my heat-mates, I eased the pace to cruise into the top. I posted the fastest time from the heats but knew I could not count on this again for the final.

In the finals, I sprinted to the bottom of the climb. By the time I’d reached the wood, my heart was in my throat and my legs once again burning like mad. About 50m from the top I heard the announcers below say the women behind were gaining on me. In my head, I screamed NO! And willed myself to keep putting one foot in front of the other as fast as I could. I finally crested the slope and dove into the crash mats. I had won! I have honestly never felt that complete exhaustion before!

And the big question: Can you tell us why a triathlete, like yourself, is better suited for the Red Bull 400 than a runner or cyclist?

Triathletes are well suited for Red Bull 400 because they have a very well-rounded level of lower and upper body fitness. The cycling is helpful for the power needed to push up the incline. The running is imperative for the actual movement up the hill. We are also well-versed in doing longer sustained efforts and being able to gauge pacing.

McBride’s season so far is off to a great start. Winning IRONMAN 70.3 Victoria and coming second at IRONMAN 70.3 Mont-Tremblant. Earlier this year she placed fourth at the African IRONMAN Championship with her fastest Ironman yet!

Next up, she is racing the IRONMAN European Championship in Frankfurt, Germany, on July 8th. With a strong result, she will hopefully be able to secure a spot at Kona!

From the editor: Why Rachel has the best chance of winning the Red Bull 400 in Whistler?

Let’s get real for a second. Runners and cyclist are great and all, but for us triathletes, we got three sports. Rachel has got the heart of a champion and can push her body to the extremes to pull out an extraordinary performance. Just take a look at the Red Bull 400 from two years ago. No argument, a triathlete is built to succeed at the Red Bull 400. To win requires endurance, strength, pacing and a type of will that only comes through pushing your body to its breaking point, and then asking for more. All of which are attributes found in a triathlete by the name of Rachel McBride.

Sound interesting? Looking for a battle between your head and legs? Want to challenge your friends to a similar competition? Sign up here and come challenge yourself https://www.redbull.com/ca-en/events/rb400-whistler