Great Britain’s Alex Yee thrilled the hometown crowd with a brilliant win in the first medal event at the Commonwealth Games today, running past his rival, New Zealand’s Hayden Wilde, and cruising across the line as the Kiwi served a 10 second penalty.

Canada’s Tyler Mislawchuk, one of the favourites coming into the Games, had a tough day that included getting dunked at the start of the swim and a flat tire that derailed his chances for the podium.

The 750 m swim saw New Zealand’s Taylor Reid lead the way out of the water with South Africa’s Jamie Riddle and Wilde right behind. Those three were able to open up a bit of a gap and set up a three-man breakaway on the bike.

“It’s unfortunate, one of the guys on the podium dunked me in the water with no reason,” Mislawchuk said. Since he was on the pontoon close to Wilde, one would assume that’s who he’s referring to. “It’s pretty disappointing. I just don’t like cheating, so that’s unfortunate.”

Mislawchuk’s day only went downhill from there.

“I jumped on my bike and my tire popped when I jumped on my saddle,” he said. “So I rode 2.5 km and changed it, but my gears wouldn’t work with the new wheel, so I couldn’t continue.”

It’s been a tough year for Mislawchuk, but he’s optimistic he can turn things around for the mixed relay on Sunday.

“It’s been bad luck,” he said. “I’ve had a chest infection, lung infection, COVID twice. Bad luck, but it can’t last forever. I’m healthy and fit right now, so it’s just disappointing that I couldn’t do it on the day.”

Out on the bike course the the two Kiwis and the South African were able to stay clear through the 20 km bike, despite some hard work early on by the Canadians and the British team.

“I hopped on the bike and I heard that Tyler and Charles were right there, so I rode pretty hard at the start and tried to bridge up, but once I saw that Tyler wasn’t there I kind of shut it down with Charles and conserve things for the run,” Canada’s Martin Sobey said.

The chase group kept things close enough, though, to ensure that the race would come down to a 5 km footrace for the title.

“I led (the group) out of T2, which was kind of exciting,” Sobey said. “It was my first major Games and it’s a lot louder than other races I’ve been at.”

Sobey and Paquet were both part of the chase pack that included a determined Yee along with Australian Matt Hauser. Up ahead Wilde was pulling clear, but a 10 second penalty for undoing his helmet too early meant he would have to serve time in the penalty box before he could cross the finish line. Once Yee managed to catch his Kiwi rival the win became a forgone conclusion – Yee cruised through the finish line while Wilde served his penalty, having enough time to do that and still get to the finish ahead of Hauser, who rounded out the podium. 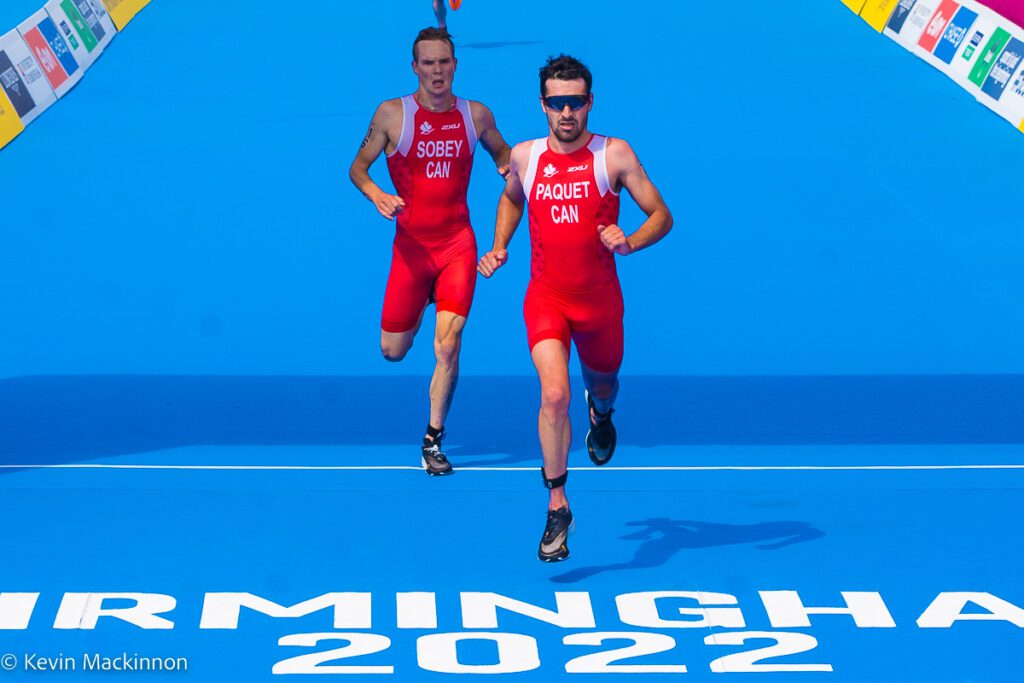 Paquet would end up outsprinting Sobey for 10th.

“That run course was really hard,” Paquet said after the race. “I just tried to pace myself on the run and I had a good battle with Martin in the end. It was a good experience.”

You can find full results from today’s race here.