The Subaru Saskatoon 5150 Chase triathlon is the third stop in the Subaru West Triathlon Series. It takes place during the Saskatoon Jazz festival and as a result, on race weekend, downtown Saskatoon is bustling with activity from the mainstage at Bessborough Park to River Landing where the race expo takes place.
For the professional athletes, a unique chase format is employed where the men’s race is issued a time handicap behind the women’s race and the first person across the line is the winner. Last year the time gap was fifteen minutes and Brent McMahon took top honours in a close finish of about 20 seconds to Magali Tisseyre. This year the bike course was extended an extra five kilometers and the run course was run in reverse direction so the time gap was established as a sixteen minute advantage for the girls. TSN cameras were everywhere all weekend to capture all of the action for a one hour television show documenting the chase.

The race is an age group qualifier for the 2015 Olympic Distance World Championship. The race rules followed Triathlon Canada guidelines and on race morning the water temperature indicated a non-wetsuit swim. Warm temperatures and high winds created a very slow and choppy swim course. Athletes swam two laps, exiting the water briefly after each lap. In the women’s race, Alison Hooper took an early lead, exiting the water solo and flying out onto the bike course with Alex Coates and two age group athletes about thirty seconds back. Melanie McQuaid lost almost two minutes in the swim, coming out alone in fourth place.

On race day, high winds created very difficult conditions for riding with a mix of head and crosswinds most of the way back to Saskatoon. Onto the bike, McQuaid managed to cut into the deficit from the swim by the 10 km mark and established a lead off the bike of almost 9 minutes by T2. Behind her, Hooper and Coates raced into transition with Coates leading Hooper by approximately a minute. By the finish Hooper had taken back 30 seconds on Coates who claimed second pro female finish on the day and sixth overall.

Coates overcame some last minute complications to finish strong. After the race she explained, “This race was definitely one of my most challenging races to date, both in the nature of the race as well as in my preparation. My string of bad luck began when I realized I hadn’t brought my bike shoes to the race! It then continued when race morning I realized I wasn’t able to change gears on my bike! The people of Saskatoon must be the most generous people on the planet, as in both cases wonderful ladies came to my rescue. I was able to borrow some road shoes the day before, and at the last minute an athlete gave up her bike to me, sacrificing her race for mine. I was completely blown away by their kindness, and couldn’t have raced without their help. The race itself was both amazing, and extremely painful. The “chase” format really set me up to race scared the whole time. Honestly it was kind of awesome when the men, guys I have raced alongside for many years, began passing me on the run! We never get to race together, so it felt like a good bonding experience. Overall I am extremely pleased with my sixth place finish! Thank you Saskatoon and Lifesport!”

Alison Hooper said she is “really happy with my swim and the start of my bike. I lost of bit of time and focus when my aero bar came loose and fell off around 20km, regardless the race between the women was for 2nd as Melanie was in another league on the bike. With a choppy swim, massive headwind on the bike, and hilly run this race was tough and really highlighted weaknesses; overall it was a great test of abilities. Non-drafting is always a challenge coming from ITU racing but I think this finished off a great block of hard training and will help with my prep for the ITU Pan American Cup in Toronto in two weeks. Extra thanks to Paul at LifeSport and Magali Tisseyre for setting me up with a TT bike.” 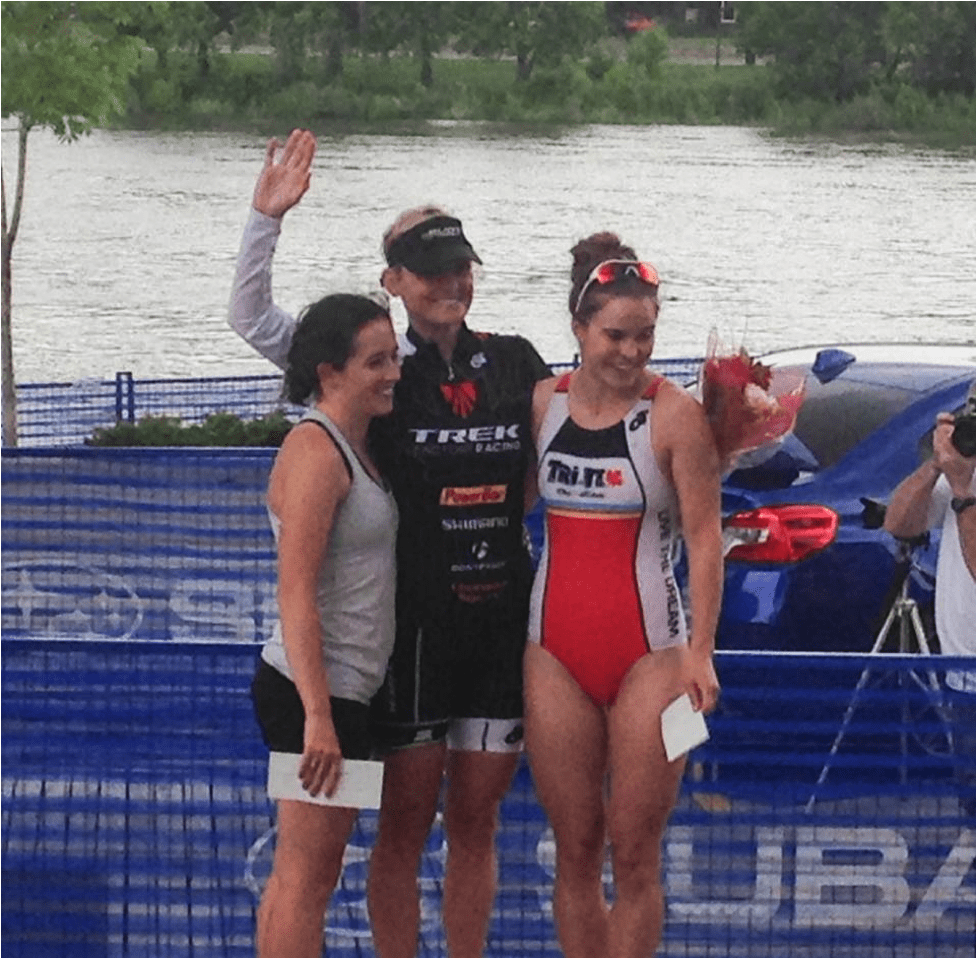 The men’s race saw Jon Bird exiting the water ahead of Brent McMahon and Sean Bechtel with Jeff Symonds having an excellent swim less than 30 seconds back. Onto the bike it was young Taylor Reid, who erased his two minute deficit to McMahon, Symonds and Bechtel by T2 with the fastest bike split.

Out of T2, Reid wasn’t finished setting best splits on the day as he also ran the fastest men’s split in his chase of first place. However, McQuaid had only lost about seven of her sixteen minute advantage and that proved to be too large a gap to cross in 10 kilometers. The second fastest run split went to Symonds while McMahon had third fastest men’s split to run himself up to fourth place and third overall male.

On his race Reid said, “The race went much better than I expected. I did not have a good swim and in most of my ITU races in the past that would have meant my day was over. But I was able to pull off a very good bike on a new TT bike that I have been riding for about a week and a half. I was very surprised when I passed Sean Bechtel and then Brent McMahon. Once I past Brent I knew I was going to be running from the field and chasing McQuaid. The Saskatoon race just fell in at a perfect time when I had chosen to make the switch over to non-drafting. Also having the TV cameras gave the race an extra wow factor.”

After the race McQuaid praised the novel race format: “It reflects the longevity that one can have in this sport as an amateur when the oldest professional athlete can share the podium with some of the youngest pros. I really appreciate how fun it is to have the absolute front of the race, which never really happens for the women who generally start in a wave behind, so I was very excited to take full advantage of that opportunity and that motivation was reflected in my performance today. I think it is great that these ITU athletes came to do battle with us veteran long course athletes and today the long course team took top spot. I really look forward to coming back to Saskatoon and I hope we have more of these chase races in the future. It is great for us and so great for spectators as well.” 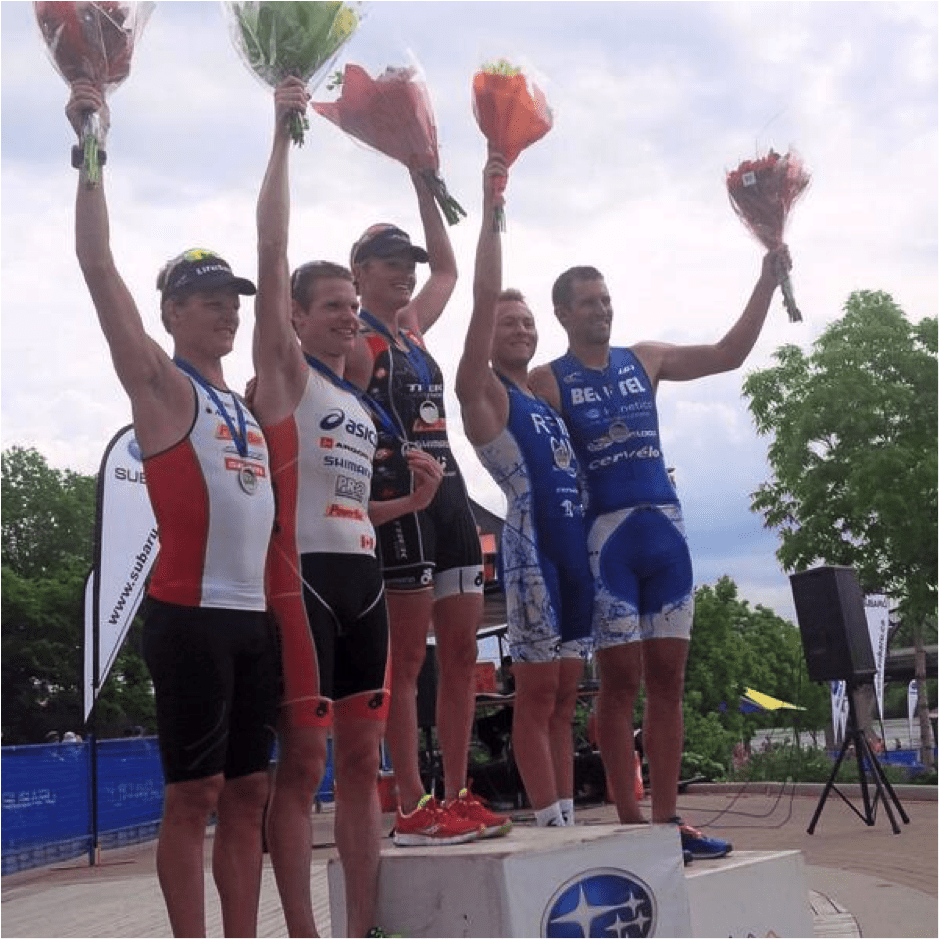 The event was filmed for television and a one hour broadcast of the race will be on TSN in approximately a month’s time.