With the easing of COVID-related public health restrictions on outdoor sports activities in Quebec, the 2021 triathlon season in that province kicks off on July 18 with a sprint event in Laval, Quebec’s second-biggest city. One week later, on July 25, Saint-Mathieu-de-Rioux — a tiny town in eastern Quebec, halfway between Rivière-du-Loup and Rimouski — will host the inaugural triathlon festival that it was forced to cancel in 2020.

”Ironically, the pandemic helped us quite a lot,” says race organizer Patrick Dumont. ”With almost two weeks to go before registration closes on July 21, we are up to 308 participants.”

“After a year of inactivity and no racing, people are just so eager to get out and do a triathlon, and that’s helping us.”

Public health officials are allowing 250 participants per wave, which means the Olympic-distance race will begin at 7:30 a.m., followed by a sprint race at noon. Spectators will be allowed along the run and bike courses, but they’ll be barred from the start and finish line and the transition area.

COVID restrictions also mean there will be no kiosks and no after-race party, but Dumont is putting the best face on those limitations.

”It’s allowing us to focus on the triathlon itself and less on all the activities around the race,” he says.

Three-time Kona age-group winner Pierre Lavoie — a giant in the Quebec sports world — promised Dumont a year ago he’d come out of retirement to try to best his son, Bruno-Pierre, and to encourage the sport in eastern Quebec. Lavoie has confirmed he will be there, race-ready.

Information and registration for the Triathlon Mont-Saint-Mathieu

Last year we wrote a story on the Saint-Mathieu event in our March issue. Here’s that story:

For the town that dares to try: Pierre Lavoie comes out of retirement

There is nothing like the birth of a first grandbaby to make you take stock of your priorities. Even for a triathlete who embraces getting older — especially when it means racing at the bottom of a new age group — the arrival of the next generation turns out to be the moment you ask yourself, “Can I really have arrived at this stage of my life?”

You wonder if you will want to be out putting in the miles on your bicycle mid-summer, when you could be marvelling at your grandson’s newly acquired ability to scoot across the floor unaided.

It turns out my stepdaughter knew I’d be conflicted. The baby was still in her womb when she emailed me an article from her local community newspaper to let me know that Saint-Mathieu-de-Rioux, the farming village in the Lower Saint-Lawrence region of Quebec where she and her partner live, will hold an inaugural triathlon in late July. 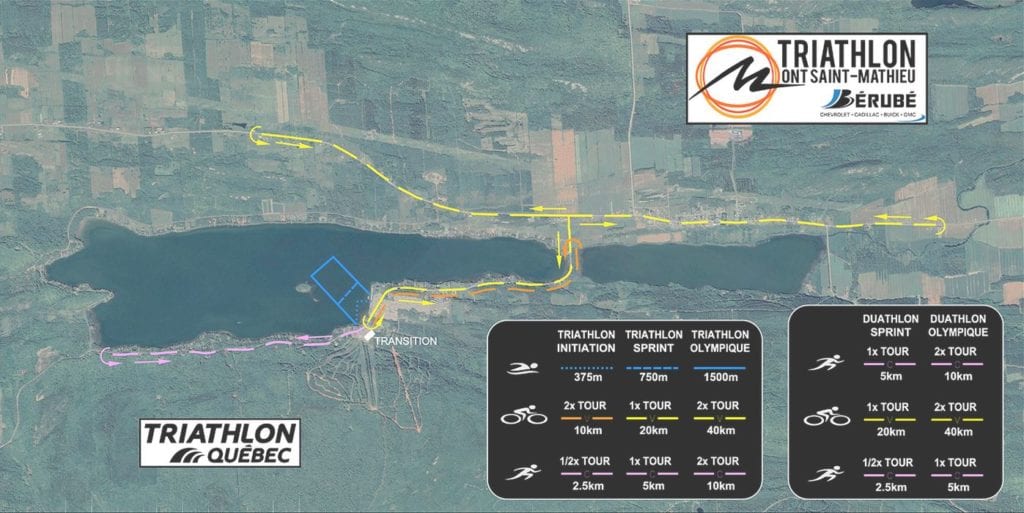 For me, the timing and the locale couldn’t be better: an excuse to make the five-hour drive from Montreal to spend time with the baby and still train and race. And what a setting. Nestled in the rolling hills below the Appalachians, it’s all maple sugar bush and pine forests, beaded with lakes and small dairy farms — their big, grey barns leaning inland from a century of being beaten by the same steady winds that propel the blades of the modern-day windmills that loom on the horizon.

The roads, asphalted and impressively smooth, wind up from the village and through the forest, worth the climb for the spectacular view of the St. Lawrence River five km below.

After a weekend spent biking and swimming in Saint-Mathieu, Dumont knew he’d found the place. Coincidentally, a fellow triathlete, local resident Carl Charron, had also approached the municipality and Triathlon Québec about organizing a race — something neither has ever done before.

“I’m the ‘go for it’ type,” said Dumont. ”I’ve been to 10 or so different triathlons in my life, so I have a pretty good idea of what it takes — a lot of organization, but it’s something I knew we could pull off.”

Kind of like the way he pulled off starting a tri club from scratch last year: within months of its inception, Triathlon Rimouski had 60 members, many of them triathlon newbies.

“A lot of people had been pretty sedentary,” Dumont said. “Some didn’t know how to swim — so we started by teaching them how to swim.” By the end of the first season, about a dozen members had done their first triathlon — including a whole group of women who braved huge waves to do Ironman 70.3 Maine, at Old Orchard Beach, an eight-hour drive from Rimouski.

“I try to transmit the kind of encouragement that I got,” said Dumont. In his case, the kick in the pants came a decade ago, at 37. By then he’d been a smoker for close to 25 years. He’d played hockey and soccer in his youth, but gave up sports as an adult. Staring at 40, Dumont had taken up jogging, but still hadn’t kicked the nicotine habit. He went to a motivational talk by Pierre Lavoie, a giant in the triathlon world in Quebec, and left committed to changing his life.

“Lavoie wants to get people moving. He wants people to take charge of their lives, to adopt healthy life habits,” said Dumont. “You can’t help but be inspired.”

Triathletes across Canada may know of Lavoie from his days as a perpetual competitor at Kona. The 56-year-old from L’Anse-Saint-Jean, in Quebec’s Saguenay region, won his age group at the Ironman world championship in 1996, 2004 and 2005, when he broke the world record for 40- to 45-year-old men.

Lavoie retired from triathlon in 2013, at 51. Hoping to set one last age-group record at Kona, he finished second — but he still beat the old record by more than three minutes, finishing in 9 hours 23 minutes.

Aside from his family, a whole contingent of Quebecers, including the media, travelled to Hawaii to witness that last performance. That’s because Lavoie is a household name in Quebec. In 1999, he launched the Défi Pierre Lavoie, a 650-kilometre biking event in his home region, to raise awareness about Leigh syndrome, a rare form of congenital lactic acidosis that killed two of his four children in early childhood.

By 2005, Lavoie had raised $1.2 million for research into the disease, and while continuing to raise funds for orphan disease research, the focus of his life’s work became the promotion of physical activity in children and teens. His Grand Défi  — or Big Challenge — has been wildly successful. Since 2011, 80 per cent of school-aged children in Quebec have been involved in his program, tallying their physical activity in 15-minute blocks called “energy cubes” that add up toward prizes, including an activity-filled weekend in Montreal for their whole school.

“It’s a social movement now,” admits Lavoie, who in 2015 persuaded Quebec family doctors to begin routinely prescribing physical activity in lieu of medication, where appropriate. “That’s the vision that I started with.”

Dumont contacted his hero to ask Lavoie if he’d come out retirement for one race — to compete in the inaugural event in Saint-Mathieu-de-Rioux on July 26. To Dumont’s delight, Lavoie agreed. It just so happens Lavoie’s 28-year-old son Bruno-Pierre, a strapping 6-5” hockey player, is ready to take on his father in his first triathlon. Pierre Lavoie simply can’t resist a dare: he’s bet his son he can beat him by a full three minutes.

“Bruno-Pierre is a great athlete in his own sports. And he’s a stronger cyclist than I am,” says Lavoie. “I told him, ‘You’ll be a minute ahead of me when I start to run. But on the run, I’m going to wipe you.’”

Lavoie has never been to Saint-Mathieu-de-Rioux, but he’s taken by Patrick Dumont’s commitment to bringing triathlon to their region.