‘Twas the night before Daytona …

And the buzz continues to be about the $1.15 million dollar slugfest we’re likely to see at the PTO 2020 Championship at Challenge Daytona. With over 100 of the world’s top athletes set to compete over a somewhat unique 2/ 80/ 18 km distance on the super-speedy Daytona International Speedway track, this is going to be an incredible race. So here’s a final look at what we might be able to expect based on what we’ve been seeing here in Florida over the last few days.

Watch the live coverage of the PTO 2020 Championship here.

It’s been much harder to get consensus on a clear favourite in the women’s race, but lots of people think Anne Haug’s running talent could make the difference tomorrow. That really will depend on whether or not the defending Kona champ can come off the bike close enough to run her way through the women’s field. That’s certainly not a stretch, though, considering she rode 4:47 in Kona last year before ripping through a 2:51:07 marathon.

So that means the likes of Holly Lawrence and Lucy Hall, who are likely to beat the German out of the water, will need to make their mark through the first two legs of the race and follow that up with a really strong run to take the title.

That said, there are a lot of people who feel Nicola Spirig will be the one to beat tomorrow. The super-mom and double Olympic medalist has more than a few half-distance wins to her credit, and for a lot of those she rode regular road bikes and still won. Despite the rumours that she was going to be on a road bike that were kicking around Daytona earlier this week, the Swiss superstar has been riding a TT bike to prepare for this race. While she might not be a stellar World Triathlon sprint- and standard-distance swimmer, she’ll be more than handy enough over 2 km against a field of predominantly distance-oriented athletes. She’s a rocket on the bike and a strong runner and knows how to prepare and be ready for big races – a recipe for success, for sure.

We’re not being biased to include Canadian Paula Findlay (pictured above) in the list of contenders for tomorrow’s title. She’s the defending women’s champion here and the word is that her running is as good as its ever been – a scary thought for a woman who won five straight WTS events during her earlier draft-legal career. Lisa Norden is another athlete many are citing as a potential contender – third here last year and an impressive cyclist (she’s represented Sweden at the last two world cycling championships).

An athlete who is on a lot of under-the-radar-lists is Amelia Watkinson, fresh off a win at Ironman Cairns, but it’ll remain to be seen if she’s got the run speed to hold off the likes of Haug or Spirig. As is Germany’s Laura Philipp, who shouldn’t be an “under-the-radar” pick at all – she’s finished on the podium at the 70.3 worlds and was fourth in Kona last year. She’s another rocket on the run who has improved her swimming dramatically over the last few years.

With a truly stacked list of potential champions, it’s likely to be an incredible race, for sure, one which will likely go to the athlete who can put together the most balanced performance of swim, bike and run efforts. It’s hard to imagine anyone is going to be able to make up much of a deficit from any of the three legs – the field is just too strong and even for us to see anyone be able to make up any sort of deficit. 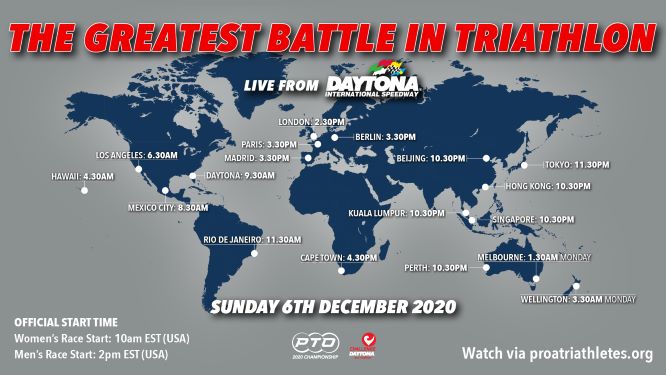 As we mentioned in our first preview, all eyes are on Alistair Brownlee this week. He’s fit, confident and seems to have the perfect balance of strength and speed to excel here tomorrow. Heck, even Sebastian Kienle said the two-time Olympic gold medalist was the clear favourite here in Daytona.

That said, as much as Kienle seems to suggest that we count him out, we’re not going to do that. His shoulder seems to have recovered nicely from the broken collar bone he sustained a few months ago, he’s got a new bike and super-aero-looking position, and his running has been rock solid over the last year. All that and more can be said for Lionel Sanders, who set a new Canadian one-hour record last month on the bike, a week after running a 5 km PB. The Canadian is the defending champion here in Daytona – there is absolutely no counting him out.

Anyone who saw Gustav Iden’s near-perfect race in Nice last year will know that he’s got the firepower to compete with Brownlee, who he passed on the run with apparent ease last year. If he can duplicate that magical day, he’ll be one to watch, but it’s hard to imagine that this bike course will suit him as well as the one in Nice did.

Javier Gomez seems to be in great shape, too, and, like Brownlee, this course really suits him. The only question is whether he’s got the cycling power to go with the big guns if this turns into a shoot-out during the second leg of the race, which it very much could.

The big wild card, in more ways than one, will be Vincent Luis. The two-time defending World Triathlon champ is doing his first long-distance race, so it’s hard to say if he’ll truly be ready for the sustained speed for 80 km that’ll be required to bike near the front of this race.

And the list could just go on and on and on. Ben Hoffman and Tim O’Donnell have handled themselves so well in fields like this and have the all-around fire-power to compete with the best on any given day. Has training with his big brother Alistair put Jonny Brownlee in the kind of condition and shape to compete here tomorrow.

Bottom line? We’re in for an epic day of racing.