American Amber Ferreira kicked off her triathlon season this year in the snow at the ITU Winter Triathlon in Quebec City this past March. The pro long course triathlete is untouchable in snowshoes and she posted the fastest split of the day for the snowshoe segment in Quebec.  Ferreira won the US Snowshoe National Championships twice and came second at the World Championships in 2012. Ferreira is set to race Florida Ironman 70.3 this weekend.

When asked whether she finds the distance daunting Ferreira  maintains a positive attitude, “It’s a process to get to the start line but once you’re there, there’s nothing to be afraid of” she explains.  “I love racing. Ironman is a journey. Good race or bad race, I can smile at the end.”

She qualified for Kona in 2009 as an age-group athlete  and has since set her mind on reaching Kona as a pro. She’s hoping that the dream will become a reality this year. She had a number of podium finishes last summer on the 70.3 circuit finishing third at Timberman and Eagleman, and fourth at Mont-Tremblant–clearly she loves racing in Quebec. 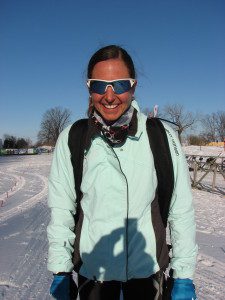 Ferreira has a background in running Division I cross-country and track at Northeastern University. She combined her expertise in running with a strong background in swimming and decided to try out triathlon. “I tried my first Ironman in 2009, and I was completely hooked on this sport,” says Ferreira. “It suits me as an athlete. I’m a stronger more durable athlete for the three sports.”

Ferreira balances her training with a professional career as a physiotherapist and coaching triathlon and running teams.