Former Canadian track and field star Tamara Jewett made Triathlon Magazine Canada look good today (we put her on the cover of our July issue) with a dramatic come-from-behind win to take the Canadian Pro Triathlon Championship in Caledon, Ont. today.

Jackson Laundry, one of the event organizers, blasted to the lead on the bike and never looked back to take the men’s title.

The event was run over the standard (Olympic) distance with a mix of ITU specialist and long-course athletes “meeting in the middle” for a non-drafting event.

Jewett runs to the win

While it might be easy to attribute her win to the day’s fastest run – 2:10 quicker than runner-up Amelie Kretz, the 2016 Olympian, it was Jewett’s impressive swim and bike legs that set up her big win.

The morning began with a three-loop 1,500 m swim (the swim course seemed to be a bit short based on the times), which was dominated by Ontario junior Kira Gupta-Baltazar. Leaving 30 seconds behind Kretz, the two-time member of Canada’s junior team at the world championship was even with the Rio competitor by the end of the second loop, and would eventually finish in 16:55 to Kretz’s 17:26 split. Jewett had the days sixth-fastest swim – her 19:23 put her just under two-minutes behind Kretz.

Once the swim was done, the athletes travelled to a sub-division in Alton, where they completed the bike and run legs on a loop that was about 1.3 km.

The 31-lap bike course included a fair share of climbing and some technical, fast corners, but the long-distance athletes seemed to shine during that leg. B.C.’s Rach McBride dominated the bike leg with her 1:03:25 split, with Kristen Marchant coming off the bike in second ahead of Jewett and Kretz, who was competing in her first non-drafting race.

Once out on the run, though, there was no stopping Jewett, who blasted to the front of the race by about the half-way point of the run. Kretz would catch McBride with just over a lap to go to take second, while McBride hung on for third.

We caught up with Jewett after her win: 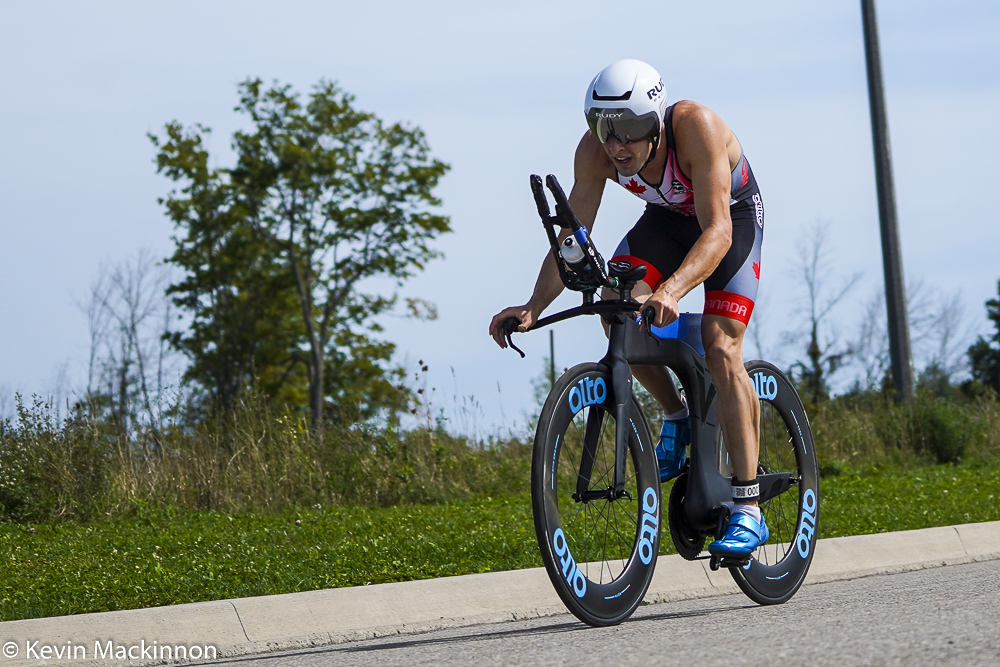 Laundry dominates on the bike

Three days ago was the one-year anniversary of Jackson Laundry’s horrific crash at the Ironman 70.3 World Championship, but you can forget any concerns that he might not return to the form that saw him win Ironman 70.3 Mont-Tremblant last year.

The day began with a dominant swim by Charles Paquet, who represented Canada at the Pan American Games last year. He finished the three-loop effort in 15:57, well ahead of two-time Olympian and Ironman champion Brent McMahon, who managed to cross the mat on the beach in 16:49. Laundry finished the swim in 17:47.

On the bike, though, things turned into the Laundry show as he quickly overcame his deficit to Paquet, then made a steady move on McMahon, who had passed the young athlete from Quebec earlier in the race. Once Laundry made the pass he steadily opened up the gap to McMahon (who turns 40 in five days), and came off the bike in the lead after a 55:51 split, besting McMahon by 1:33 for the second leg of the race. Taylor Reid, a regular training partner of Jackson’s who also helped put the race together, was third off the bike, with two-time Ironman Mont-Tremblant champion Cody Beals just behind him, with Paquet hot on his heels.

There was no touching Laundry or McMahon on the run as the pair maintained their positions to nail the top two spots on the podium, leaving a big group to battle for third. Beals and Paquet ran together for a few laps, and were then joined by last year’s national champin, Jeremy Briand. He and Paquet would pull clear of Beals, and finally catch Taylor. Taylor, who ran for McMaster University in his younger days, was up for the challenge and stuck with the ITU specialists for a while, but eventually the pair were able to get clear. Briand surged away over the closing laps to claim the final podium position. Paquet faded a bit over the final lap and wasn’t able to hold off Reid, who surged back to claim fourth. Paquet was able to hold off Beals by 25 seconds to stay in fifth.

We caught up with Laundry after the race, too.