“We’re exploring every option,” Messick said. “That includes potentially taking the race out of Kona.”

That statement shouldn’t really come as a surprise. After almost two years of race cancellations, Ironman is in desperate need of getting the world championship out of the way. With a number of athletes who had qualified for the 2020 race all deferreed, with even more now qualified for a 2021 event that are also now deferred, they’ve got a lot of athletes who are ready to use their well-earned Kona qualification. Then there’s all the athletes who are qualifying every week that Ironman is able to put on an event. 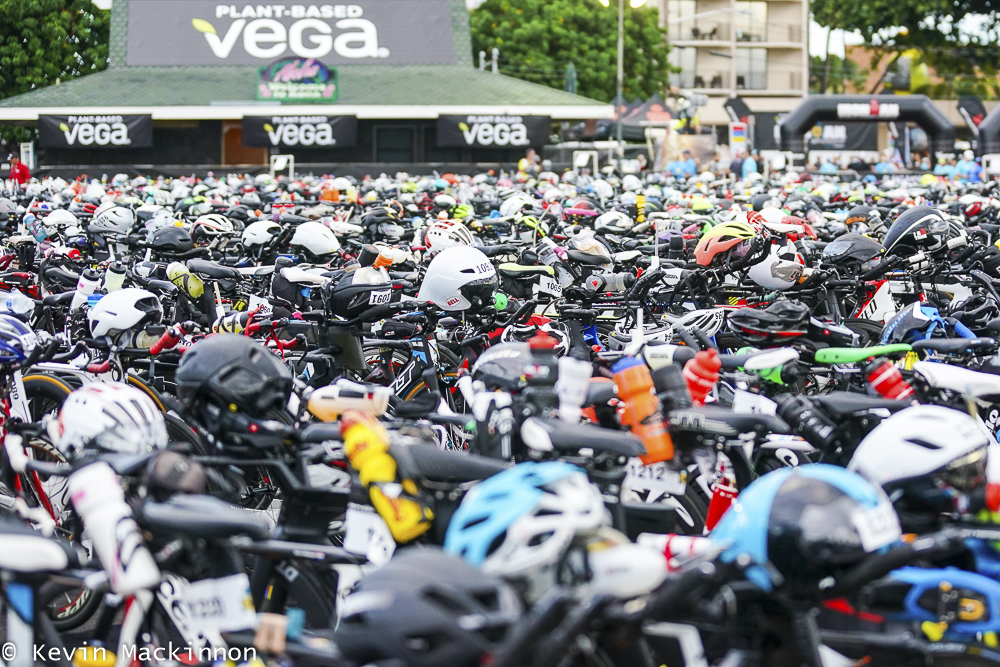 When I first started working with Ironman almost 30 years ago, they used to talk about maxing out at 1,800 in Kona because that was all the bikes they could fit on the pier. Then it was 1,900. Then it was 2,000. Now there are upwards of 2,200 who compete in Kona every year, but I do believe that they’re reaching capacity – not just in terms of the pier, but the Queen K is already jammed with athletes, even though the race heads off in waves. It isn’t a course that works with 3,000 competitors.

So Ironman needs to get the race done in February, but also has to respect the challenges that Hawaii is facing with COVID – and believe me, Diana Bertsch, who is the woman who runs the world championship, is a long-time Kona resident for whom a sense of community is paramaount. With the ever-changing dynamics of the COVID pandemic, it’s hard to be absolutely sure that the race can go ahead on the Big Island next February. Messick is simply being realistic with his comment.

You can listen to my conversation with Phil Wrochna on this topic in this week’s Life of Tri podcast:

Does this mean Ironman is thinking of moving the world championship from Kona? Probably not. The Big Island is a huge part of what makes the Ironman brand so special. Qualifying for the iconic race in Hawaii is what separates Ironman events from all other triathlon races in the world. To me they have a nice balance with the rotating 70.3 worlds, so leaving Kona be would make sense. So a move next February would likely be a one off.

Unless, of course, there’s not a lot of push back from athletes and Ironman finds itself in a position where they can make lots of money through hosting the event in different venues. The 70.3 worlds seem to be attracting lots of interest – can you imagine what Abu Dhabi or Bahrain would pay to be able to host the Ironman worlds?

So where could the Ironman World Championship be held next February? There are more than a few options.

If Ironman was determined to put the race on in the US one could imagine a number of sites in Florida. (Probably southern Florida – Panama City Beach, the site of Ironman Florida, probably isn’t warm enough in February.) Clermont would be a great option – it’s the closest to “hilly” as you’re going to get in the state, and already has a full-distance race course in the form of the Great Floridian.

There are some sites that might work in Texas, too. San Diego might work in Febuary, and would certainly make for a historic venue – the first triathlon was held there in the early 70s. The old Ironman 70.3 World Championship venue of Henderson, Nevada would be another excellent spot to host the worlds – you’ve got Lake Las Vegas right there and certainly more than a little accommodation opportunities.

If Ironman wasn’t determined to stick to the US you could certainly envision the race hitting a venue like Cozumel, which already has an Ironman event. There is the issue of a dead-flat course, but for one year you could live with it. Would Ironman head back to Los Cabos? They held an event there from 2013 to 2017.  South American venues probably aren’t on the list as many countries are dealing with COVID outbreaks at present.

Australia and New Zealand might have served as excellent options in normal times, but with their strict border controls right now, both countries are out. Ditto for many Asian countries. Japan is likely still a bit shellshocked from the Olympics. Africa remains a big question mark in terms of travel, too.

Over in Europe, Mallorca would probably be too cool in February, but Lanzarote (main photo above) would certainly work and features the most Kona-like course on the Ironman circuit. It is hard to imagine mainland Europe works – the average water temperature in Nice in February is 56 degrees – likely that’s out, too.

Abu Dhabi has long hosted some major triathlon events, including WTCS Abu Dhabi and the long-course Abu Dhabi International Triathlon. As mentioned above, it would be interesting to see if the United Arab Emirates capital or Bahrain (with its Bahrain Endurance 13 heritage) might be interested in hosting the worlds. Israel also hosts the Israman every year in Eilat, which would be a worthy world championship course, too.