Defending Ironman world champion Jan Frodeno has confirmed he’ll be racing against a stacked field at Challenge Gran Canaria in 10 days. He’ll be taking on a stacked field the men’s winners of every Kona race since 2014. Frodeno has won three Ironman world championships – taking the win on the Big Island in 2015, 2016 and 2019. Most recently Frodeno dominated the field at Challenge Miami.

Related: Welcome to the Jan Frodeno show – a masterful win at Challenge Miami

Earlier this month Sebastian Kienle, the 2015 Ironman world champion, announced that he’d be heading to the Canary Islands, too.

Last month we learned that Patrick Lange, the 2017 and 2018 Kona champion, would be competing in Gran Canaria as well. 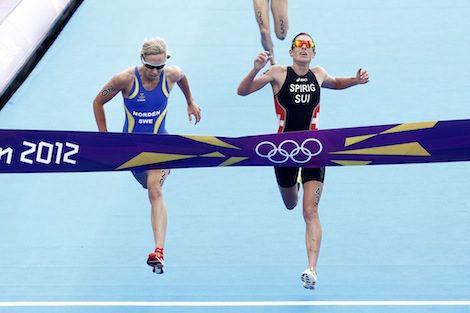 After the exciting sprint photo-finish that saw Switzerland’s Nicola Spirig take the gold medal at the 2012 Olympics over Sweden’s Lisa Norden, the two can’t ever enter a race without that epic race coming up. Spirig will be using the race as a tune-up for her run at the Olympics in Tokyo later this summer – during the lead up to both her gold- (2012) and silver- (2016) medal performances she did a number of half-distance races. Norden has been dealing with a number of injuries over the last few years that forced her to focus on cycling – she actually won Sweden’s road championships a few years ago. She hasn’t given up on triathlon, though, and will certainly use her cycling skills to try and open up a gap on the Olympic champ by T2.

Challenge Cancun has also landed one of the sport’s biggest names – Javier Gomez will be competing at the event in Mexico on May 2. Gomez is a five-time ITU world champion, a two-time Ironman 70.3 world champion and has also won the Xterra world title. The race in Cancun is expecting close to 3,000 participants, including a 45-person pro field.