After a third-place finish at the last Super League Triathlon (SLT) Arena Games event in London, Great Britain’s Sophie Coldwell moved up to the top of the podium today thanks to an impressive all-around performance that actually saw her run away from London champ Beth Potter, who is fresh off a world-best 5 km road time a few weeks ago.

For the men Marten Van Riel continued his impressive run of Super League Triathlon Arena Games wins with a dominant performance that saw him win all three legs of the race.

Down to the third round

The Arena Games racing in Rotterdam consisted of a 200 m swim in a 50 m pool, along with a 3 km bike and 1 km run using the Zwift platform. The legs are done in different orders for three consecutive rounds of racing. Potter took the first swim/ run/ bike leg, pulling clear on the run thanks to a blazing 3:09 run and holding off the rest of the women on the bike. Coldwell took second in that first heat, with Maya Kingma taking third.

Coldwell started to take control of the race in the second round – which consisted of a run/ bike/ swim. Coldwell led the run, then was happy to stay with the pack through the bike, setting herself up nicely for the swim. Coldwell, the strongest swimmer in the race, easily stayed in front, with Potter taking second, setting up an exciting third leg with the two British athletes both at 19 points.

The final leg, a bike/ swim / run, is normally perfectly set up for Potter to make her big move, but after two weeks of non-stop interviews thanks to her world-best run, Potter didn’t seem to have the same punch as she did in London. The women all stayed together on the bike, and sprinted to the pool as a group. Potter moved from 10th to fifth even before she dove into the water, while Coldwell struggled with her swim cap, but still managed to finish the swim in the lead. Potter was a few seconds back starting the run, but once again Coldwell showed her running prowess, holding on for an impressive win.

Spain’s Anna Godoy managed third-place finishes in the second and third rounds to nail the final spot on the podium. 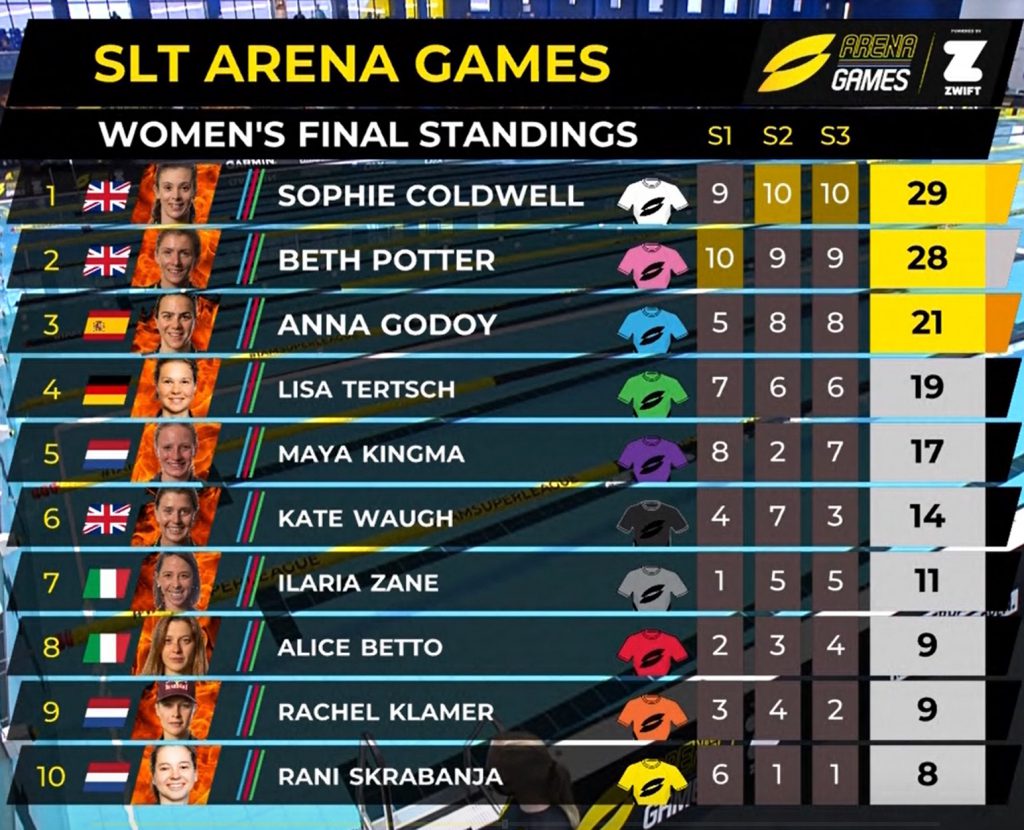 After taking the London Arena Games event  there was simply no stopping Marten Van Riel at the Rotterdam race as the Belgian took all three legs of the race to earn 30 of the possible 30 points to dominate the day.

While France’s Aurelien Raphael blazed through an impressive 2:02 first 200 m swim in the first heat, he had Van Riel, countryman Anthony Pujades and Germany’s Jonas Schomburg on his heels heading onto the treadmills for the run. Vasco Vilaca (POR) and Great Britain’s super-runner Alex Yee would eventually join that group on the final bike leg, with Van Riel taking the sprint in an exciting finish that saw the top six all finish within half a second of each other.

The second heat saw Van Riel stay close to Yee through the opening run, then use a swift transition off the bike to hit the water just ahead of the rest of the group and cruise through the swim to take a commanding lead with 20 points. That set up an exciting final heat as Vilaca, Pujades, Raphael, Schomberg and Yee were all tied in second with 14 points.

Once again Van Riel proved to be unstoppable in the third heat, with the men staying together on the bike before Van Riel used his strong swim speed to pull clear heading onto the treadmill for the final 1 km run. He never looked back, although Yee did provide a bit of competition running his way to second, which was enough to earn him the silver medal on the day. Raphael hung on for third. 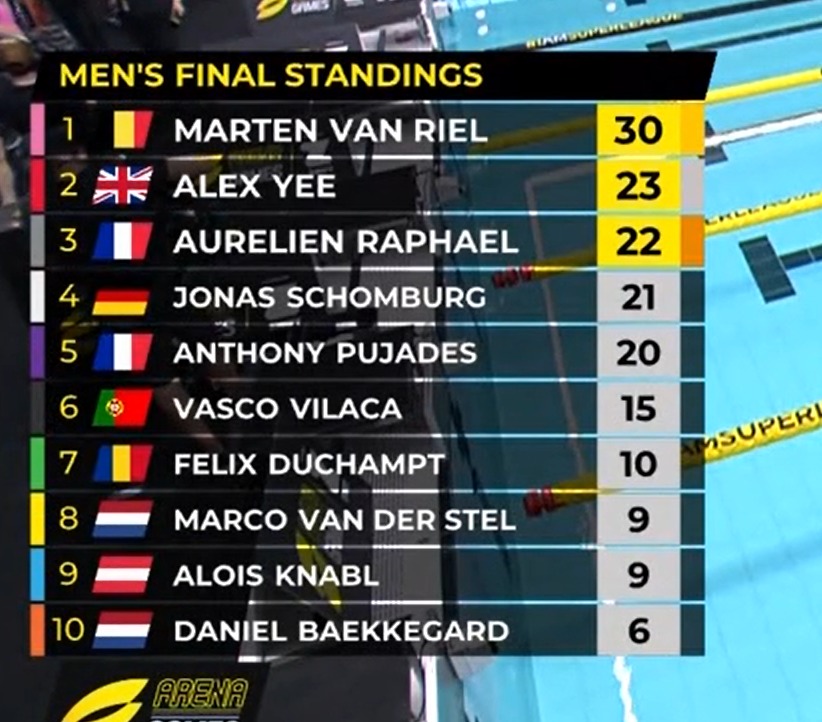