Read this story in French.

In the early hours of Sunday morning the duel between Lionel Sanders and Jan Frodeno  will take place in Allgäu,Germany. This duel is a full-distance triathlon sponsored by Zwift, but the duel will not take place in a virtual world, but on a real course optimized for performance. Here is the link to watch the race.

The swim will take place in a quiet lake and the two triathletes will do four laps to complete the 3.8 km. They will be able to follow a line under the water to stay on track.

Frodeno is expected to come out of the water with a big lead over Sanders. Frodeno  is used to leading in the swim, so he won’t be disadvantaged by the fact that he can’t  draft  competitors. However, Sanders is usually used to swimming behind swimmers, so he may lose a little more time than usual since he will have to swim alone. Sanders’ best swimming time is 51:33, while  Frodeno  can swim five to six minutes faster.

If Sanders wants to have any chance (as minimal as they might be) of beating Frodeno, he will have to redouble his efforts on the bike. In my opinion, if after the swim Sanders sees that he has no chance of beating Frodeno, he will put it all out on the bike to provide a bit of a show and to try to beath the world best for cycling during for a full-distance triathlon.  The bike course has been developed to be as fast as possible. The course is flat, it is protected from the winds by the surrounding mountains and they have developed a ramp similar to a velodrome’s corner to allow triathletes not to lose time when taking the 180 degree turns. 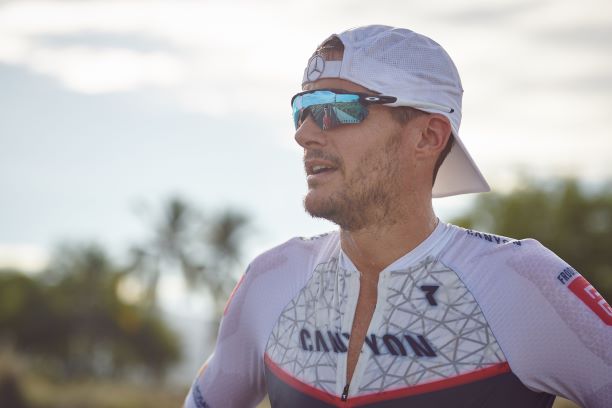 The triathletes will complete four 10.55 km laps. The run course is flat and we can expect times for the marathon approaching 2: 30 or even faster.

Since Frodeno will start cycling with a good lead, he can better conserve his energy on the bike, which will allow him to run a fast marathon. Sanders will not have that luxury and will therefore start the marathon much more tired. I predict that  Frodeno  will complete the marathon in 2:31 and Sanders will complete the marathon in 2:39. Frodeno had completed the marathon in 2:39 in 2016 when he set the full-distance record at Challenge Roth.  On the other hand, since 2016 running times are getting faster and faster, partly due to the invention of carbon plate shoes. In recent years, many triathletes have run marathons under 2:40 in full-distance races. Frodeno can therefore be expected to run faster than he did in 2016.

Does Sanders have any chance of beating Frodeno?

The swim, cycling and run courses are perfect for a triathlete like Lionel Sanders. In the swim, he only has to follow the lines at the bottom of the lake to stay on course and he can wear a wetsuit. The bike course is fast and not very technical and the run course is flat and the temperature should be ideal to allow him to run a very fast marathon.

Although Sanders had a very difficult day at Ironman Coeur d’Alene, the conditions will be very different. Sanders is a very good triathlete when it’s not too hot. His bike-run combination at Ironman Arizona in 2016 (4:04:38 – 2:42:31) is one of the best bike-run performances in full-distance racing. On the other hand, while he can give a nice “show” (which is the purpose of this duel), Sanders has in my opinion very little chance of beating  Frodeno, unless the latter has a bad day, which is almost never the case. Also, one may wonder if Sanders had enough time to recover from Ironman Coeur d’Alene.

Although Gustav Iden and Kristian Blummenfelt haven’t done a full-distance race, either of these two would have been better opponents for Frodeno, since they would have been only a few seconds or minutes behind Frodeno after the swim, so they could have biked and run alongside Frodeno. However, they are currently preparing for the Olympic Games. Alistair  Brownlee  would also have been a good candidate. Although Sam Long is very competitive these days, he would have lost far too much in the swim to really be able to challenge Frodeno.

Regardless, we can expect a very interesting race and we can expect Frodeno to break his own full-distance world best of 7:35:39.