The inaugural Professional Triathletes Organization Tour event, the PTO Canadian Open in Edmonton, served as a proof of concept for what the organization is trying to do – “take the sport to the next level and see it grow and thrive.” The PTO is co-owned by professional athletes, and the vision is that the athletes will be able to earn a fair share of the profits from the success of the series. Last year the organization put on its first race, it’s “flagship” event, the Collins Cup. The Canadian Open is the first of what will eventually be four “Open” races on the PTO calendar. Later this year we’ll see the PTO US Open and next year the European and Asian Opens will be added to the mix. The “open” events will all feature a $1 million prize purse, while the Collins Cup hands out $1.5 million. At the end of the year the athletes all share in an additional $2 million prize purse that’s handed out based on the PTO World Rankings.

So what did we learn from the event on the weekend?

There really is no touching the Norwegian men right now

How dominant are Gustav Iden and Kristian Blummenfelt in the world of long-distance racing right now? Well, this should give you an idea – Blummenfelt stopped for roughly 90 seconds at the start of the second lap dealing with a cramp and still had the day’s second fastest run and took second. The two were running alongside each other as they finished the first lap, coming by the stands with grins on their faces and waving to the crowd. The two are training partners and best friends and … insanely competitive with each other. (They spent the week before the race racing motorized scooters in Edmonton.) They (and their coach) take advantage of every scientific and technical “trick” available to them. They’re off for another month of altitude training before they come back down to sea level to help Europe crush the Collins Cup. It is a recipe for success for a long time to come. Distance athletes can only look forward to the year and a half or so that the two will set their sites on the Olympics in Paris and “only focus on World Triathlon and PTO events.”

You can imagine what I was thinking when I saw Blummenfelt and Iden running together at the end of that first lap – as the race announcer for the event, I was looking forward to calling one of the most amazing finishes ever. Blummenfelt’s cramp ended that vision, which means we’re still waiting for the day that we see a truly classic race between the two. At last year’s 70.3 worlds, Blummenfelt got a flat. Iden had to pull out of the Ironman World Championship St. George because of sickness. They’ll be on the same team at the Collins Cup. Will they duke it out at the PTO US Open in September, with the worlds in Kona less than a month later? Hard to say. All of which could set up a classic duel in Kona. That could be made even better with a healthy Jan Frodeno and a motivated Patrick Lange and Lionel Sanders in the mix, too. Bottom line, though, is that it would be pretty awesome to see Blummenfelt and Iden in a sprint to the line sometime. It feels like its going to happen – it’s just a matter of when. 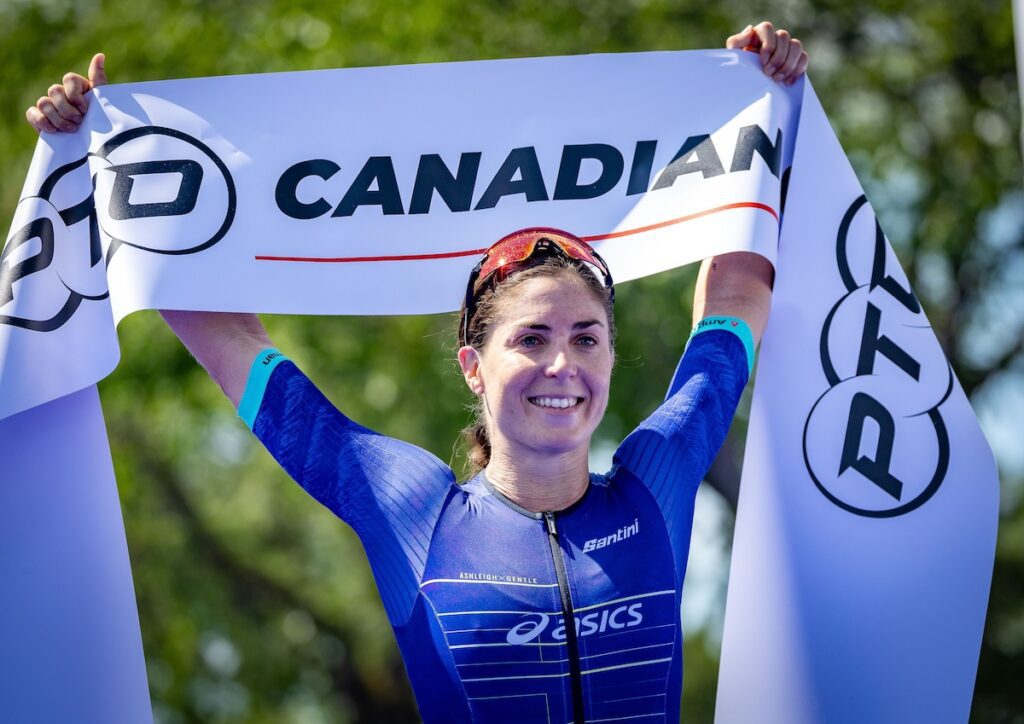 Ashleigh Gentle is getting this distance thing figured out

The Aussie Olympian is no stranger to winning big races – the two-time Olympian won the World Triathlon Grand Final Gold Coast in 2018, took second overall in the WTS series in 2017, and has won the prestigious Noosa Triathlon in Australia eight times, so it’s hardly a surprise to see her continuing those winning ways as she moves to longer distances. While I tried to say that she missed the memo about the local Edmonton star (Paula Findlay) taking the win on the weekend, she was quick to point out that Edmonton has always been a great place for her to race – she won her first World Cup there in 2011 and finished second there in 2018 and third in 2019. What was most impressive about Gentle’s win on the weekend was her bike. While she lost almost three minutes to Paula Findlay, Gentle seemed to be the one driving the chase group that was trying to keep the gap close. This year Gentle has won at Clash Miami, took second at Ironman 70.3 Elsinore, won Ironman 70.3 Andorra and followed that up with a $100,000 payday in Edmonton. She’s earned an automatic selection to the Collins Cup and, one would assume, will be one of the women to beat at the PTO US Open in Dallas and then, later this year, at the 70.3 world champs in St. George. 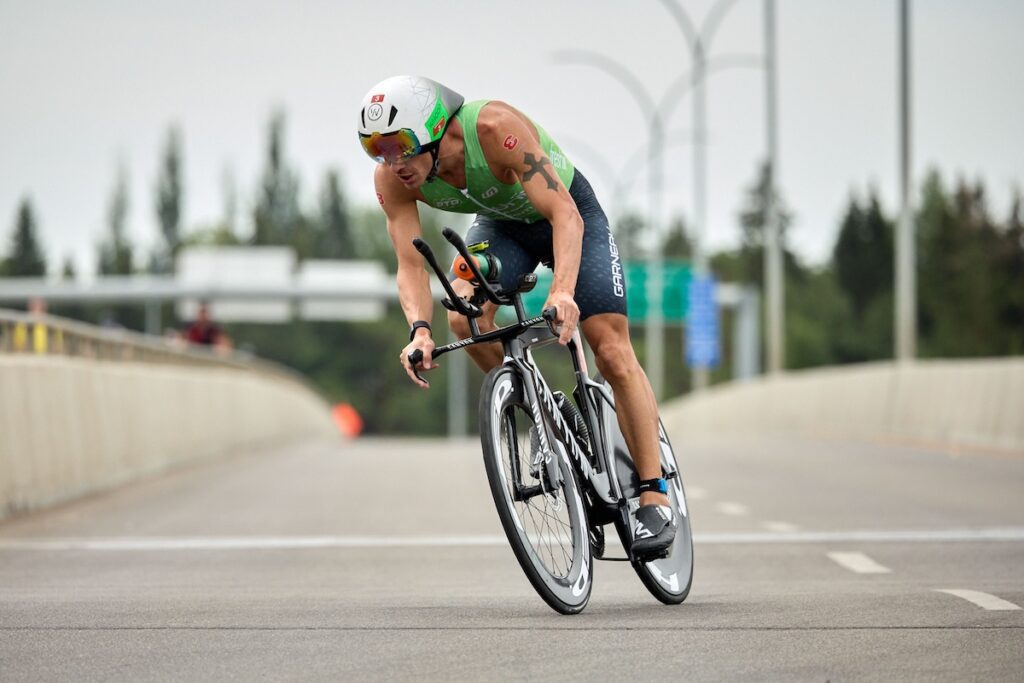 Guts can only take you so far …

Lionel Sanders, as usual, laid it all out on the line in Edmonton on the weekend, posting the day’s fastest bike split and gaining more spots on the run. But there were only three men in the field slower than he was in the water, which meant he had a lot of ground to make up once he got to dry land. Swim leader Henri Schoeman was out of the water in 25:01 for the 2 km effort. Sanders’ time was 28:49. (To be fair, Blummenfelt and Iden were 26:18 and 26:24 for the swim, so they lost time to the likes of Schoeman and Alistair Brownlee, too.) But almost four minutes becomes an almost unsurmountable gap when you have talented cyclists like Brownlee, Sam Laidlow and, of course, the two Norwegians up the road. It will be interesting to see how much better Sanders does on a bike course that requires more horse power than technical skill, too, so don’t count him out as being a factor once again at the Collins Cup. Next year one of the “Open” events is supposed to be twice the distance, which should suit Sanders much better than the 100 km format. 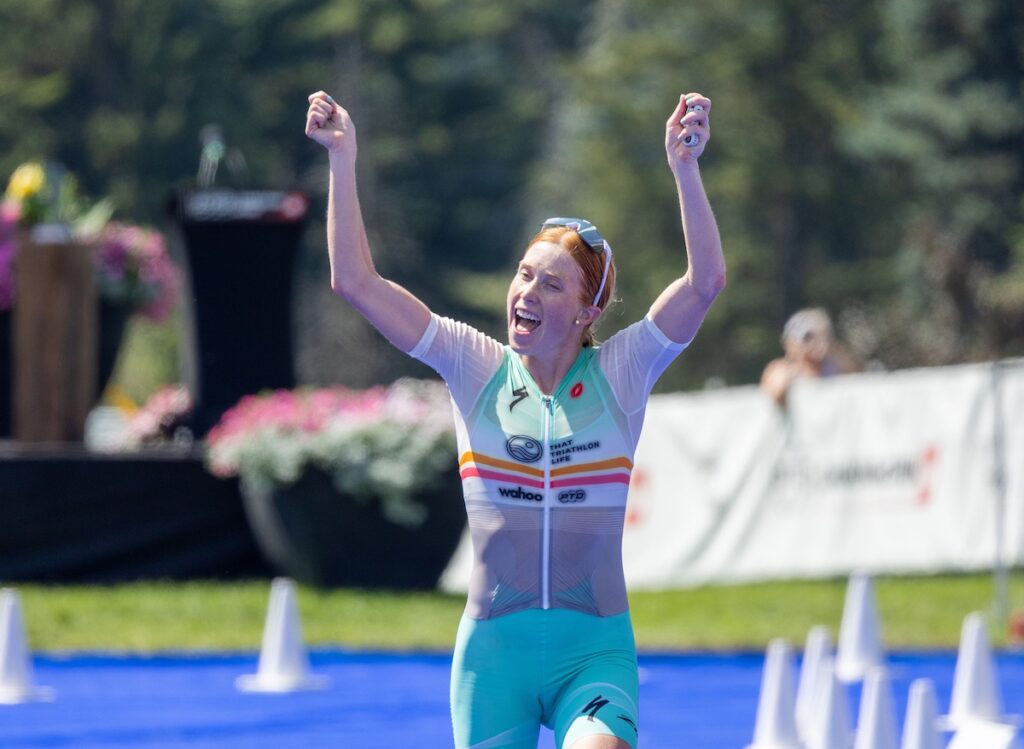 No matter how many times you tell yourself that you don’t have to worry about other people’s expectations, that the people of Edmonton are going to love you no matter what, those thoughts are likely to still go through your head a lot – especially when you see your picture on posters and banners all around the city for months leading up to the race. Paula Findlay made no bones about the fact that she was feeling pretty nervous going into the race, but still managed an incredible performance. Her bike leg was nothing short of incredible, which was hardly a surprise as it came about a month after she’d won the Canadian national time trial championship in Edmonton, too. There was no touching Ashleigh Gentle on the day, but Findlay was very solidly the next best in the field on the day. Ash she continues to build back her run fitness it will be fun to see Findlay build towards the 70.3 worlds. It is a race that is truly suited to her talents.