In a year in which there was so little racing, the fact that the PTO 2020 Championship somehow managed to happen was, in itself, one of the biggest takeaways from the $1.15 million bonanza that the pros got to take part in last week at Challenge Daytona. Here are a few more of our thoughts from the big weekend:

It might be 10 years since she won her first World Triathlon Series event (she eventually took five), but despite the challenging, injury-filled years that have stalled her progress towards the top of the sport, her win in Daytona serves as proof that she remains supremely talented and able to compete with the world’s best – especially over the special 100 km distance we saw in Daytona, and most certainly over half-distance events like the 70.3 worlds.

Related: Paula Findlay is back on top

Yes, we hear you. Daniela Ryf and Lucy Charles Barclay weren’t in Daytona, which certainly leaves a big question mark. Findlay’s all-around performance, though, saw her come out of the water at the tail-end of the lead pack, ride at the front of the race then follow up with an impressive run that was more than enough to hold off speedy Anne Haug. Her race looked much more like a Ryf win than it didn’t. Can Findlay hang with Ryf and Charles at the front of a race? Based on her performance in Daytona, yes. 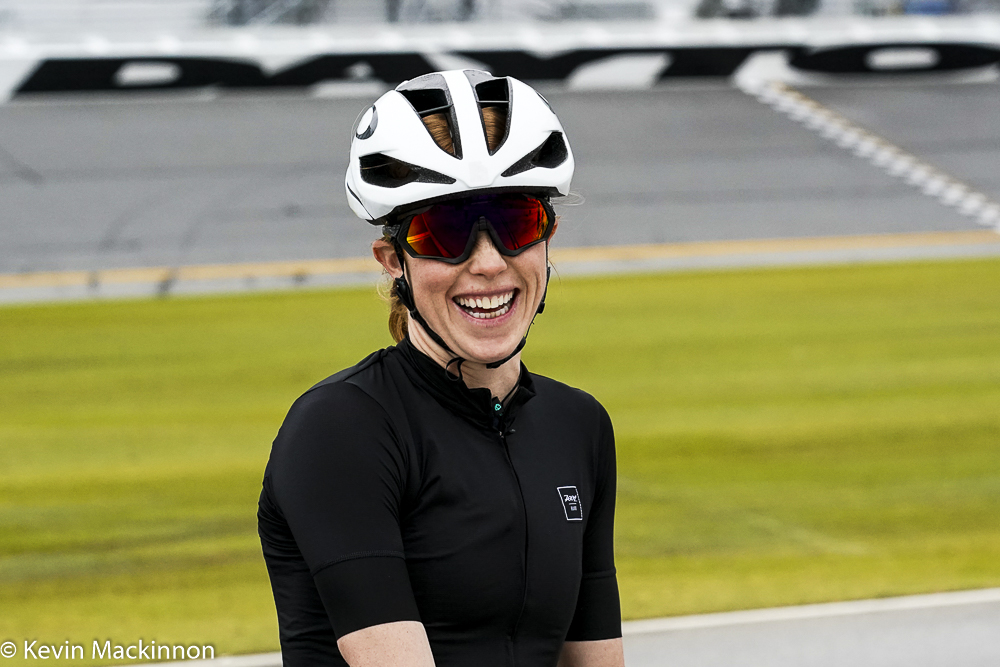 Of course that’s easy for a triathlon journalist to write and harder for a 31-year-old triathlete to accomplish, but if Findlay can continue on her present path, she sure seems ready to go after a top finish at the world championships next year. (Please let them happen!)

It needs to be phrased slightly differently – all-around swim/ bike/ runner, or not.

Heading into the race in Daytona there was lots of talk about whether or not the dynamics of the race would favour: the draft-legal World Triathlon types, or those who excel at half- or full-distance racing. With the 100 km distance – 2 km swim, 80 km bike and 18 km run it seemed as though a strong short-course specialist might prevail. With a 20 m draft zone and distances not that far off a half-distance race, though, it seemed like the longer-distance crew might still have a fighting chance.

While both winners have never done a full-distance race, both Gustav Iden and Paula Findlay are more-than-proficient half-distance racers. (Iden is, of course, the defending 70.3 world champion.)

A bigger takeaway, though, is that as we’ve steadily seen develop over the last few years, it is harder and harder to be competitive at events if you’re not more than a little proficient in all three sports. Iden, who is gearing up for the Olympics next year, was disappointed with his swim in Daytona, and he was still over two minutes ahead of Lionel Sanders. (Iden has every reason to be worried about that swim – he trailed race-leader Henri Schoeman by over a minute.)

Sanders might have ridden his way close to Iden starting the run, but the effort took enough out of his run to see him lose about 90 seconds. Matt Hanson ran his way to second, but had to make up almost a minute after the swim and then another 42 seconds after the bike on Iden – even though he had the day’s fastest run split, he was never able to really challenge the Norweigan.

Vincent Luis, competing in his first long-distance race, finished eighth, but if he hadn’t spent two minutes in the penalty tent his time would have been just 15 seconds behind Iden and he would have been second. So, while it might be nice to celebrate the Ironman second and fourth finishes, those could have been third and fifth quite easily.

In the women’s race Findlay was out of the water near the front, rode at the front, then had the day’s second-fastest run. Anne Haug won in Kona last year because of an impressive all-around performance that included an incredible run – she took second on the day despite having to spend two minutes in the penalty tent.

Of the top four in the women’s race, Findlay and Lawrence (fourth) were in the first chase group in the swim – about 25 minutes (Lucy Hall and Lauren Brandon were first out in 24:16 and 24:24). Haug trailed the first chase group by a minute, Laura Philipp (third) was another minute back, but rode over a minute faster than Haug and two minutes faster than Lawrence. Haug had the day’s fastest run, Philipp had the day’s second-fastest run.

See where I am going here? The level of competition has become so strong that you simply can’t give up too much time in any of the three sports.

Of course most triathlon fans are yawning, “Tell us something we don’t know. Have you seen how Jan Frodeno and Daniela Ryf race?”

Wait for all the fun after the now 2021 Olympics – anyone else looking forward to Flora Duffy starting to rip apart a bike course near you?

3) On a flat, non-technical bike course – bike for dough, run for dough

Lance Armstrong used to say bike for show, run for dough. In Daytona you needed both to make the big bucks.

Findlay had the day’s second-fastest bike (her 1:51:13 was nine-seconds slower than Lisa Norden’s split, but Norden would eventually have to pull out because of a calf injury), and ended up riding over three-minutes faster than Haug. She was a whopping 4:25 faster than former 70.3 world champ Holly Lawrence.

In Daytona, it really was all about the bike.

While we didn’t see as many folks stagger into T2 as we have in years past, staying in an aggressive aero position for 20 laps of the Daytona International Speedway track pushing crazy watts took its toll. And that’s putting it nicely. Gustav Iden had some more harsh words to describe the experience:

“The bike was pure torture,” he said. “You’re put in a position where you can’t move, you can’t do anything except push the power. You can’t go harder, because that will affect the run and you can’t go slower because they you’re too far back. You are kind of locked in this position in terms of power and speed. That stressed me out because it felt a bit claustrophobic to not be able to move or sit up or anything. Even though I was pushing quite hard I wasn’t gaining anything on the front group … the bike was 100 per cent torture.”

Being able to sustain the pain, though, made all the difference when it came to taking home the $100,000 pay check for the win.

At the press conference last Monday I asked Professional Triathletes Organisation CEO Sam Renouf how he felt about the PTO’s big year. “I won’t call it aggressive,” I said, “but it certainly has been ambitious.”

In a year that could have been a complete disaster for the pros in the sport, the PTO came through with $2.5 million in bonus money in April. It supported a number of small races around the world (including the Canadian Professional Triathlon Championship), started a maternity leave program, and rounded out the year with the sport’s largest pay day.

“I have two words for you,” Renouf said. “Collins Cup.”

During the coverage of the event I had the unenviable task of having to interview Lisa Norden as she pulled up and started to walk for the live coverage. In tears she explained that she had a calf injury and had hoped to get through the race, but it didn’t appear as though she would be able to. I saw her after the race.

“Sorry I didn’t say more when you were talking to me,” the 2012 Olympic silver medalist said.

Ditto for the 2012 and 2016 Olympic gold medalist, Alistair Brownlee. He was forced to pull out of the race because he pulled a calf muscle.

“I’ve pulled my calf,” he said to me during the coverage. He didn’t seem angry, anxious or depressed. It was all matter of fact. “I’ll try to run easy for a bit more to see if it comes around.”

This was the guy who entered the race as the prohibitive favourite. The guy who swam perfectly, rode like a star and seemed on track to take the day. And the guy who will take something from the day and be an even better athlete because of it.