The Professional Triathletes Organisation (PTO) has long pushed the idea that it is following the lead of the Association of Tennis Professionals (ATP), the Women’s Tennis Association (WTA), the Professional Golf Association (PGA) or the Ladies Professional Golf Association (LPGA) – today it’s taking a step towards those groups “majors” approach with the announcement of the PTO Tour. In 2022 the Tour will kick off with the launch of the PTO Canadian Open in Edmonton, the PTO US Open in Dallas and the second edition of the Collins Cup, which returns to Samorin, Slovakia. In 2023 there will be two more events added to the Tour – the European Open and the Asian Open.

The new events, along with the Collins Cup, will continue to be run over what is becoming the PTO’s preferred 100 km distance including a 2-km swim, an 80-km bike and an 18-km run. The top 40 athletes in the PTO standings will automatically qualify for the Open races, with an additional five wildcard slots available for both the men’s and women’s races.

The events will feature some of the sport’s largest paydays – US$1 million for the Open events and US$1.5 million for the Collins Cup. All will feature the same live coverage that debuted at the Collins Cup, which feature viewing figures that, according to PTO CEO Sam Renouf, “surpassed all expectations and demonstrated that there is an appetite for compelling live broadcasts of Triathlon events that appeal not only to the fans of endurance sports, but also to the general sports enthusiast.”

The group organizing the race in Edmonton are the same folks who have been bringing World Triathlon races to the city for over 20 years. It all began as the vision of Sheila O’Kelly, who anchored the group that has hosted three world championships in the city – 2001, 2014 and this year’s Grand Final.

After hosting this year’s world championships, the not-for-profit organizing committee that put on the event decided to change its name to Do North Events, according to general manager Stephen Bourdeau, who took over the position from O’Kelly in 2018.

“We didn’t want to take a step back after hosting the world championships this year,” Bourdeau said. “We want to go on organizing big events into the future. We’re ready to work with any and all sports that want to make a community impact in Edmonton, Alberta and Canada.”

It hasn’t taken long for Bourdeau and the rest of the team at Do North to get busy. Already part of the organizing team for the WTCS event in Bermuda, they will also put on the national cycling championships this year in Edmonton. Now they’ve added the PTO’s first “open” race.

“We have a long term vision for this race – hopefully in 2022 we’ll be able to put on a great event and really establish Edmonton as a home for PTO in the future,” Bourdeau says.

That vision melds with PTO CEO Renouf’s – once the PTO has settled on its sites, it would like its “Open” events to remain in the same spots, similar to what happens in tennis with Wimbledon and the US, French and Australian Opens.

For the first time the PTO Tour will include age-group racing “giving amateurs the opportunity to meet and race alongside the professionals,” according to the PTO. The age group racing will include sprint (25 km total distance) and middle-distance (100 km) races. Registration for the age-group races opens on Jan. 25, 2022.

The age-group component of the PTO Canadian Open is an important aspect for the Do North organizing team, according to Bourdeau.

“This is an event for age-groupers and pros,” he says. “Few majors offer a chance to race alongside some of the best long-course and short-course athletes in the world. That personal connection and opportunity is important – age-groupers need to feel part of the event.”

Bourdeau is also happy to express the ambitious goals the Do North team has for the race – “we want to grow the event to be the largest triathlon in Canada with 3,000 age group athletes in three to four years.” 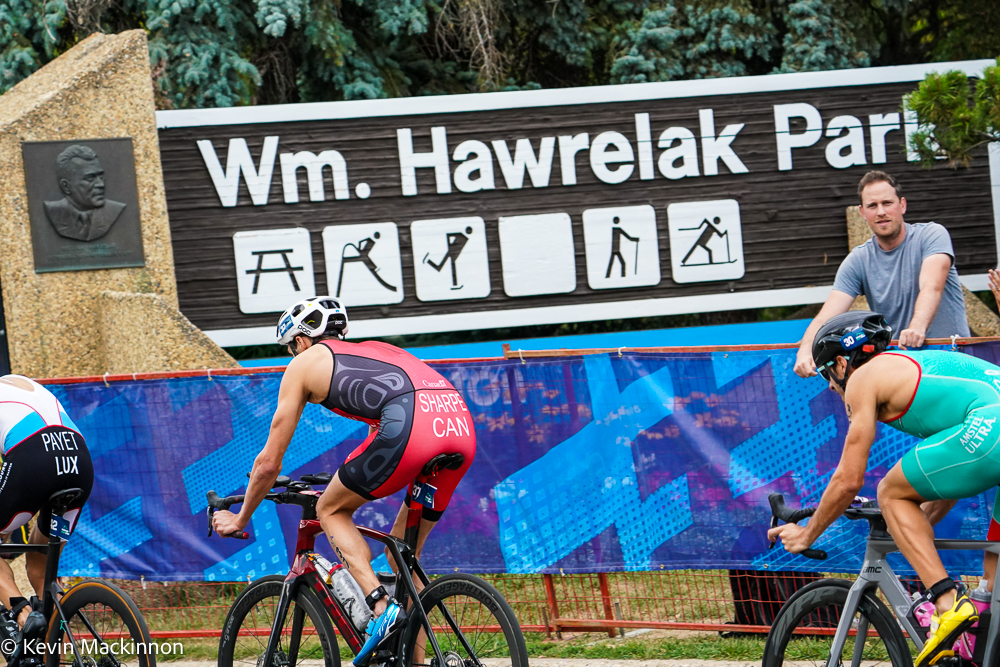 We can’t assume that the new PTO Canadian Open will take place in the Hawrelak Park venue we’re familiar with for the World Triathlon races. Bourdeau says the PTO is happy for them to “build a very Edmonton course,” which means we could see some changes to the traditional course. More details on the event will be available when age-group registration opens on Jan. 25, 2022.